Having gone through a revamp recently, Matchaya had since moved on to serve a wider variety of items from its dessert and beverages options in the past. 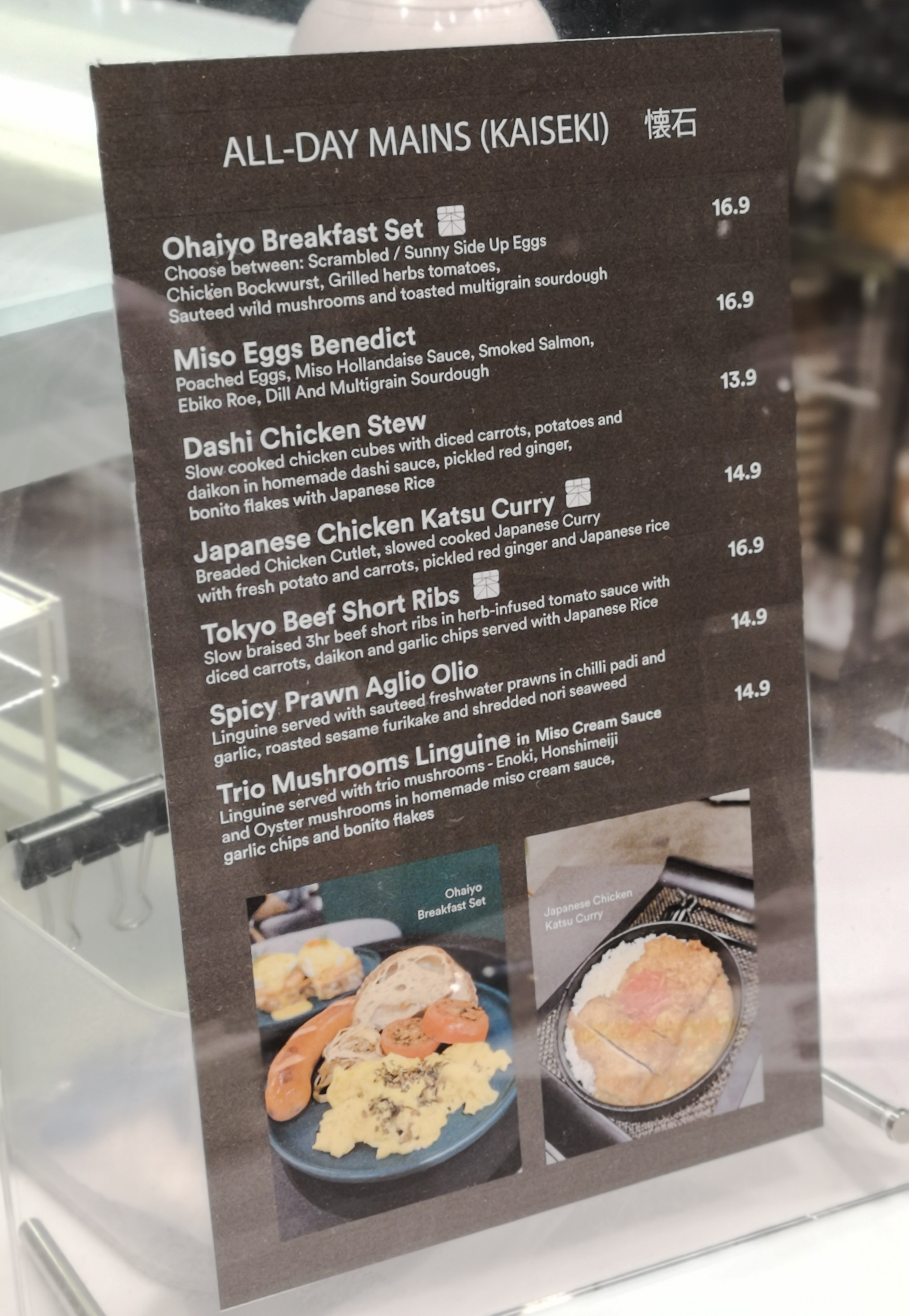 Moving out of their original space at Icon Village at Tanjong Pagar and centralizing their operations at their The Cathay branch after their re-branding, Matchaya had seen quite change in their operations over the years; starting off from just being a hole-in-the-wall store, they had grew way bigger to having their very own space with dine-in area at The Cathay when the second branch first opened; offering a wider variety of items such as Kakigori and other desserts. Only renovating their The Cathay outlet pretty recently, regulars would notice a big change with the physical aesthetics of the space; swopping the placement of the dine-in area and the food preparation area, the space is decked in a dark green accent with splashes of grey, including concrete flooring to provide for a chic, minimalist yet industrial look which is a massive change from its simplistic appearance before the revamp. Updating their menu to carry a wider variety of beverages and food options, Matchaya had not only retained most of their dessert items (that being said, the Kakigori would be sorely missed) but also had introduced a variety of mains and all-day breakfast options whilst also offering a bigger beverages menu as well. Diversifying their offerings, Matchaya also offers bakes and pastries; all of which displayed in a display chiller which also features other Japanese-inspired flavours using elements such as Kuromitsu, Sweet Potato, Goma and many more. 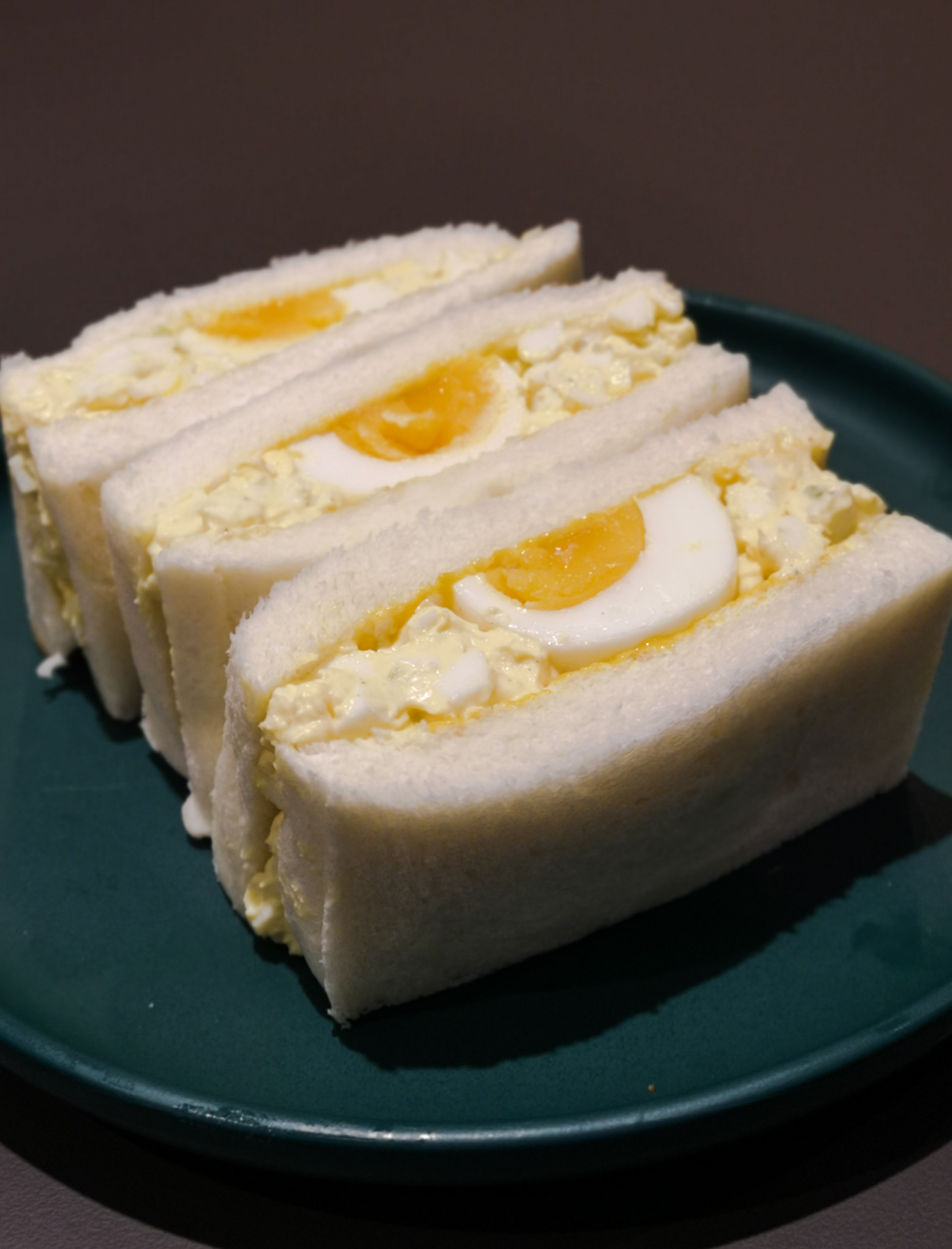 One of the items which are often raved about from the newly-introduced section of the “All-Day Breakfast” section of Matchaya’s menu would be the Tamago Sando. Featuring elements such as Soft-boiled eggs, Scallions, Dijon Mustard, Cracked Pepper, Kewpie Mayo, and Shokupan (Milk) Bread, the Tamago Sando is something meant for the light eater who just simply cannot resist their eggs. Coming with eggs done two ways, the Tamango Sando comes as a cold dish; the fluffy Shokupan (Milk) Bread being all light without being particularly wet from its fillings within, while the soft-boiled eggs come with a soft yolk that is just slightly past molten. The egg mayo is mixed with Kewpie Mayo and Dijon Mustard; the former helping to provide some creaminess to help bind the various forms of eggs and the bread together, while the latter attempts to bring out the egginess even more yet providing a tang that helps to refresh the taste buds. That being said, we felt that they could have gone a little lighter with the Dijon Mustard; starting off rather fine at first, the Dijon Mustard felt slightly overwhelming towards the end for how it packed a punchiness that was slightly excessive and a tad too sour for our liking. Still, a pretty decent item to have for a light bite, or even share for a tea break whilst having one of their Matcha-based concoctions. 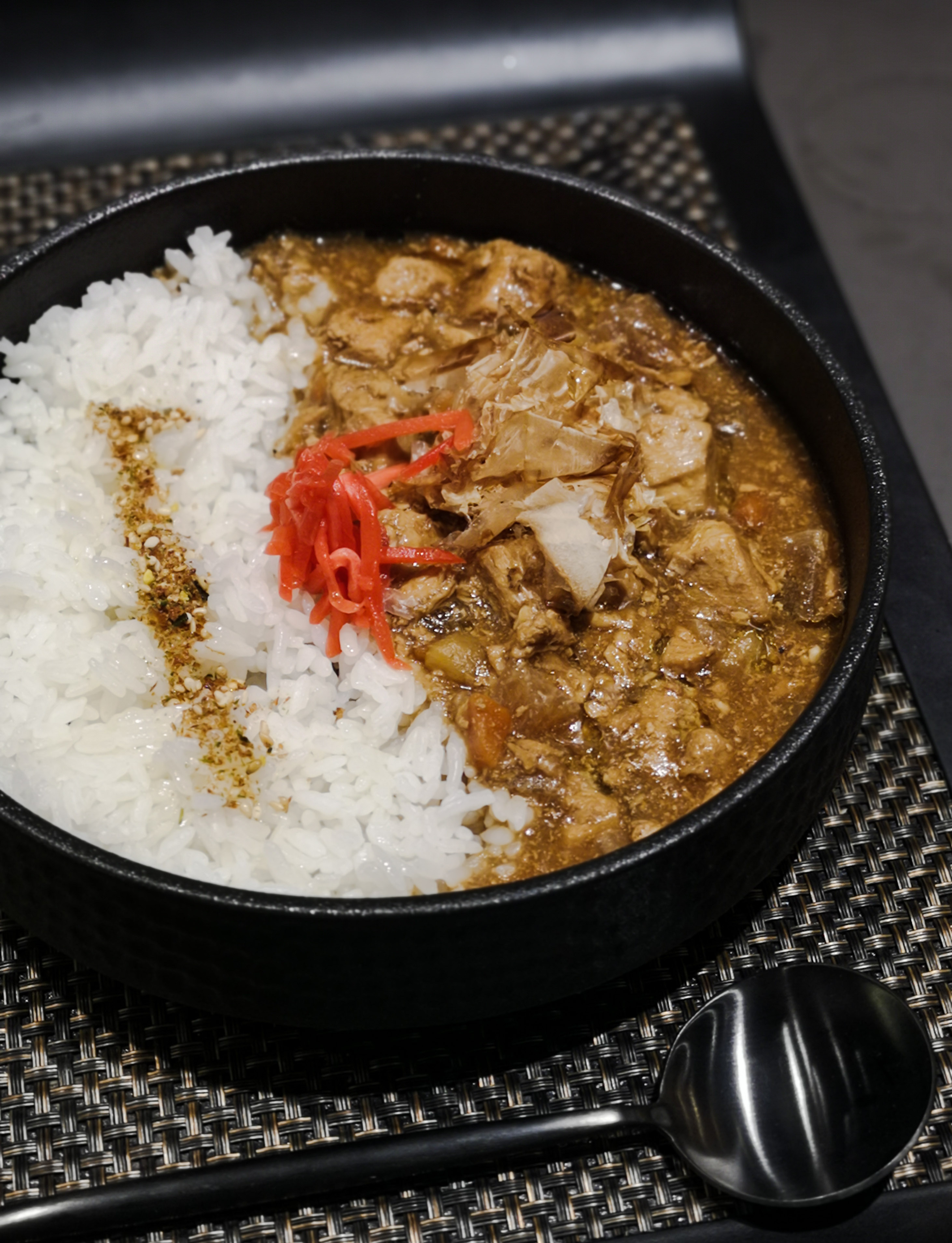 Given how they had also introduced a new line-up of mains, we also tried the Dashi Chicken Stew; an item that features elements such as Slow Cooked Chicken Cubes, Diced Carrots, Potatoes and Daikon in Homemade Dashi Sauce, Pickled Red Ginger and Bonito Flakes with Japanese Rice. More of a comforting item that warms the soul, the Dashi Chicken Stew is nothing fancy especially when compared to the Tamago Sando; the former really being more of homely stew that is lovingly cooked to carry just enough savouriness without being overly salty. The chicken cubes still carry a meaty bite, whilst the carrots, potatoes, and daikon are cooked till they are soft-to-bite; each element being sized just right to enable one to have just a good mix of all of them in one mouthful together with a decent portion of rice. While the rice may come a little dry as compared to what we had initially expected, it could be easily remedied by having a little bit of the stew every single time, while the pickled red ginger helps to add a crunch and a tang to help refresh the taste buds whenever things got a little flat after a while. 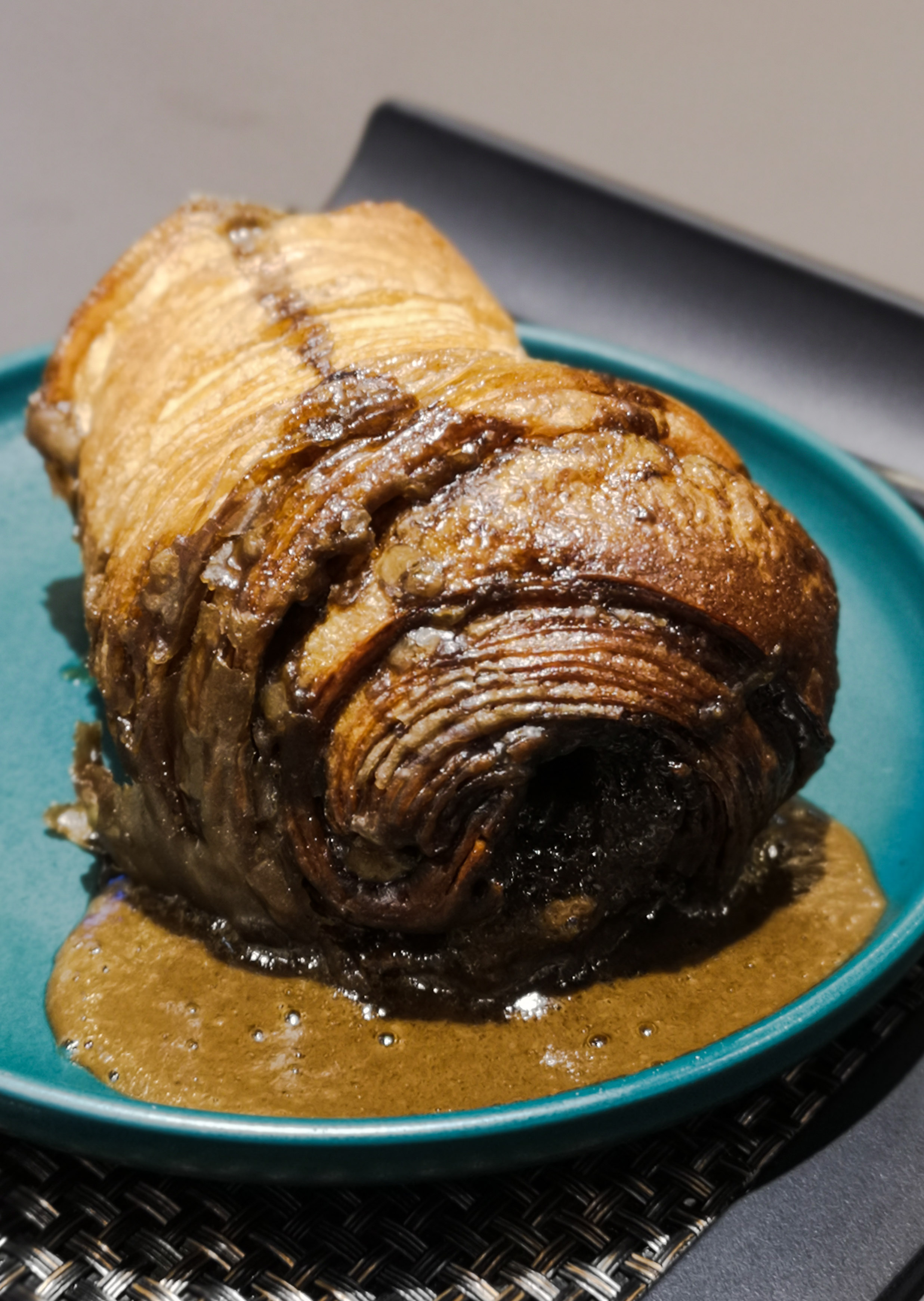 Introduced during the time when Matchaya had a pop-up stall at Takashimaya while their space at The Cathay was still undergoing renovations, the Houjicha Cruffin was one of the few bakes that are available in the display chiller when we made our visit to Matchaya. Being the only piece left when we visited on a weekday evening, the Houjicha Cruffin is served warm with an oozy Houjicha filling within. Perhaps being stored in the display chiller for a little long considering the time when we made our visit (past 7pm), the pastry seemed to have lost some of its crispiness despite being warmed up, but it is still buttery and flaky and pretty satisfying with a filling that carried the roasty notes of the tea very well. Whilst the presentation is not the best for the serving that we had got (somehow looking more like pork knuckle being served sideways on the plate) as opposed to that often seen on social media (usually standing on the plate instead), we could certainly see why this is an item that most folks would have went for when visiting the new Matchaya. 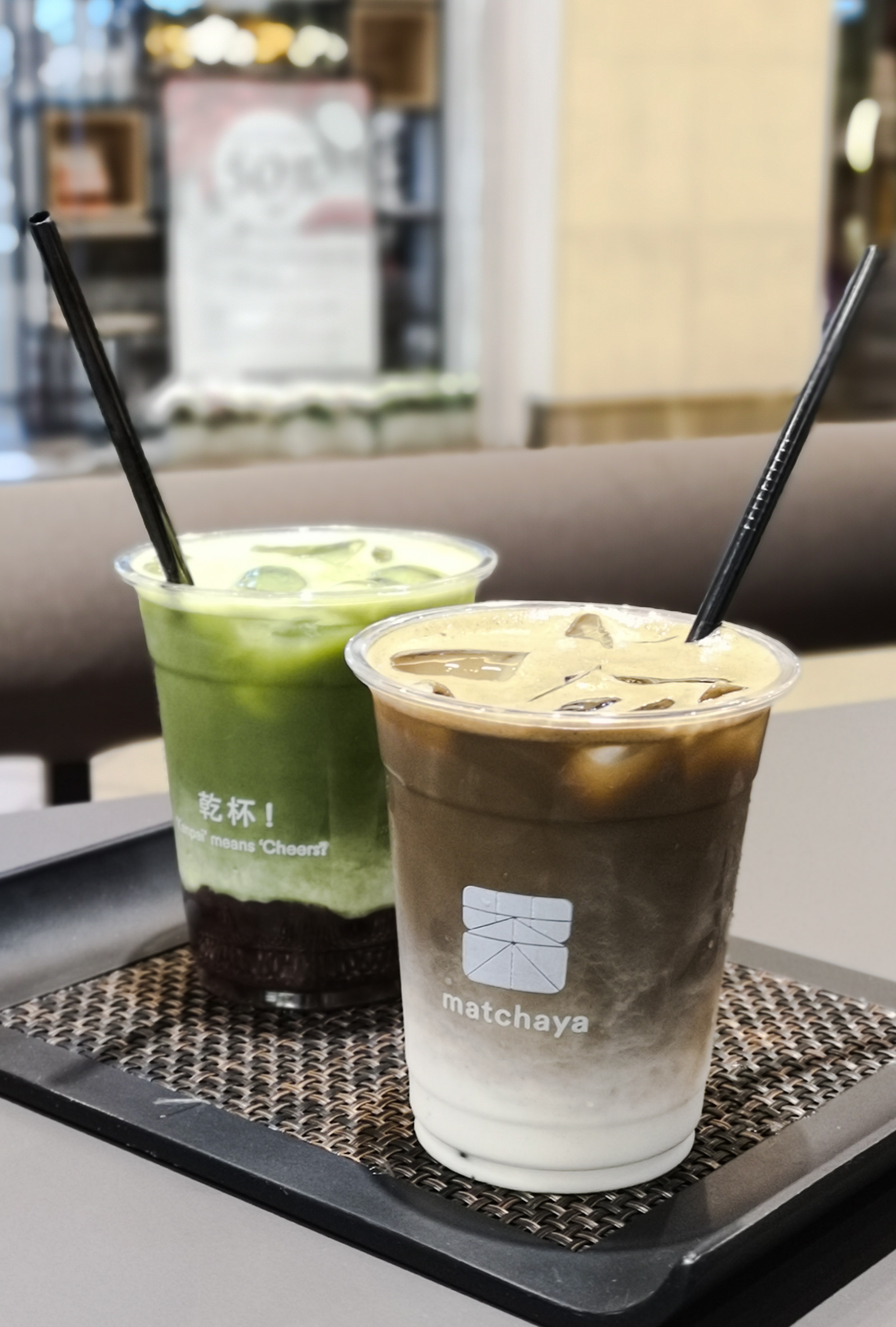 Not missing out on their beverages, we decided to give their Matcha Azuki and Houjicha Koffee a go. With both beverages belonging to their Japanese Milk Tea selection, all Japanese Milk Tea items come with a choice of Fresh Milk and Oat Milk (we picked the former for both orders), as well as a choice to go with sugar added or no sugar at all (which we went for the latter). The Matcha Azuki is a beverage that is essentially what is being described; a beverage that would have likely went even better with sugar added, the Matcha Azuki carried a good proportion of tea to milk with the earthy notes of the tea being pretty detectable yet nicely proportioned with the milkiness, while the Azuki helps to add yet another dimension of earthiness and a rather minimal hint of sweetness to the beverage with a bit of chew. The Houjicha Koffee would be a more adventurous option however; feeling more like a Latte when the initial wave of flavours hit the taste buds, it comes with a roasty hint typical of Houjicha for its finish which is almost akin to that of Yuan Yang (a beverage which is a concoction of coffee and tea mixed into a single drink) done with a Japanese touch. Pretty interesting overall. 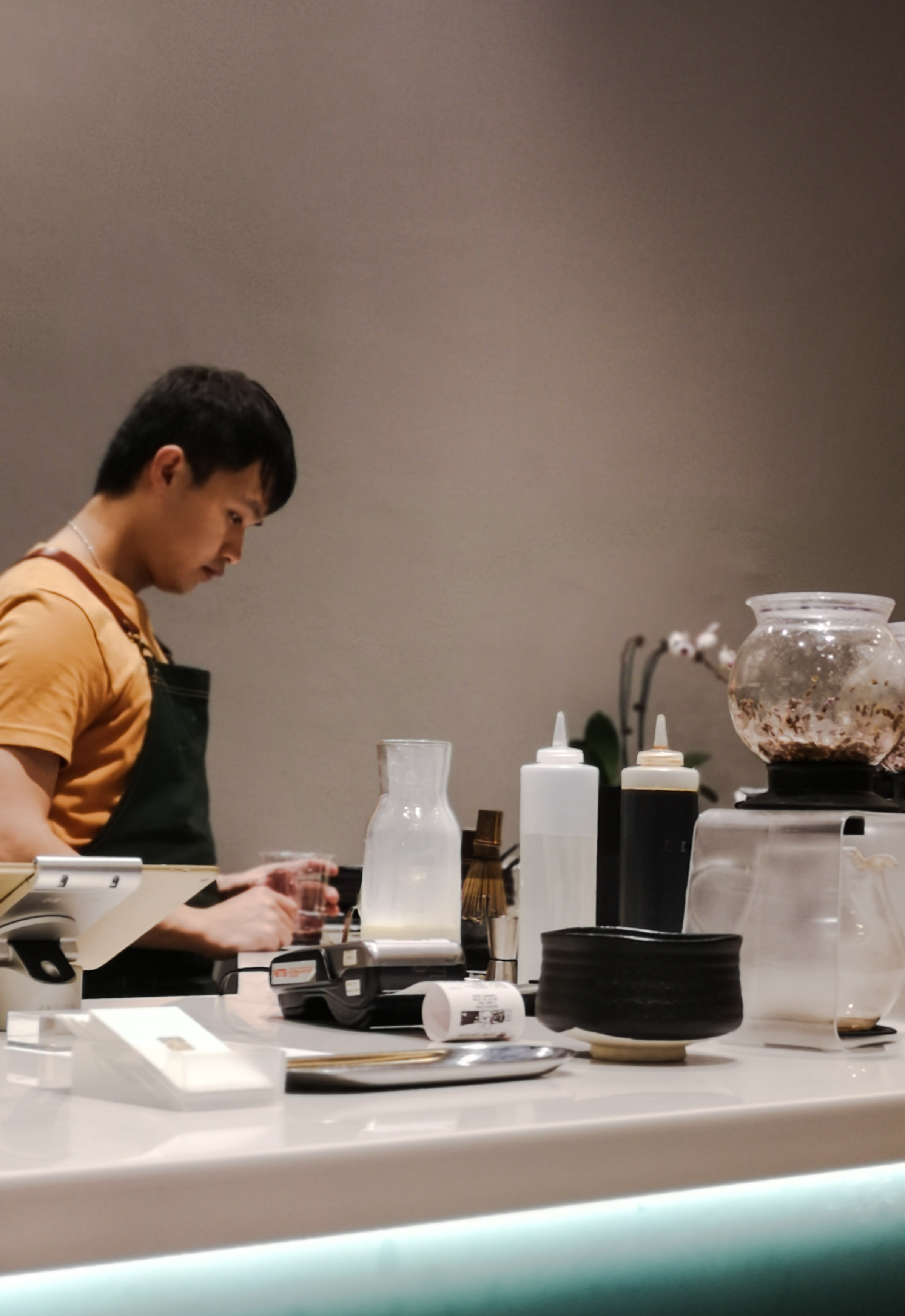 It may seem a little weird that Matchaya had diversified its offerings to include a more wholesome menu initially, but its probably doing so to scale up against other local Matcha-based brands like Hvala which had also started to serve a wider variety of desserts and also being pretty aggressive with its expansion of the late; perhaps a move that is intended to help Matchaya to stay relevant in the ever-competitive F&B scene in Singapore. While the mains are rather simple offerings and seem more to be comfort food for the soul rather than Instagrammable hits, the mains were relatively decent overall though nothing too much to shout about; they do still hold their fort with regard to beverages and desserts, which is an area that they had always been strong with. With many more new brands entering the F&B scene serving up Matcha-related items such as 108 Matcha Saro, it would be interesting to see how this version of Matchaya would appeal to the masses; a brand well-loved for their Matcha-related offerings, it would be worthwhile to see if patrons would be as accepting to the hot food items as much as their desserts which provided them much of the traction in their early days …