Going through a revamp recently, Suntec City Mall had seen some changes made to the basement of the mall which had since become home to yet another cluster of F&B establishments, increasing the variety of F&B tenants located in the mall. 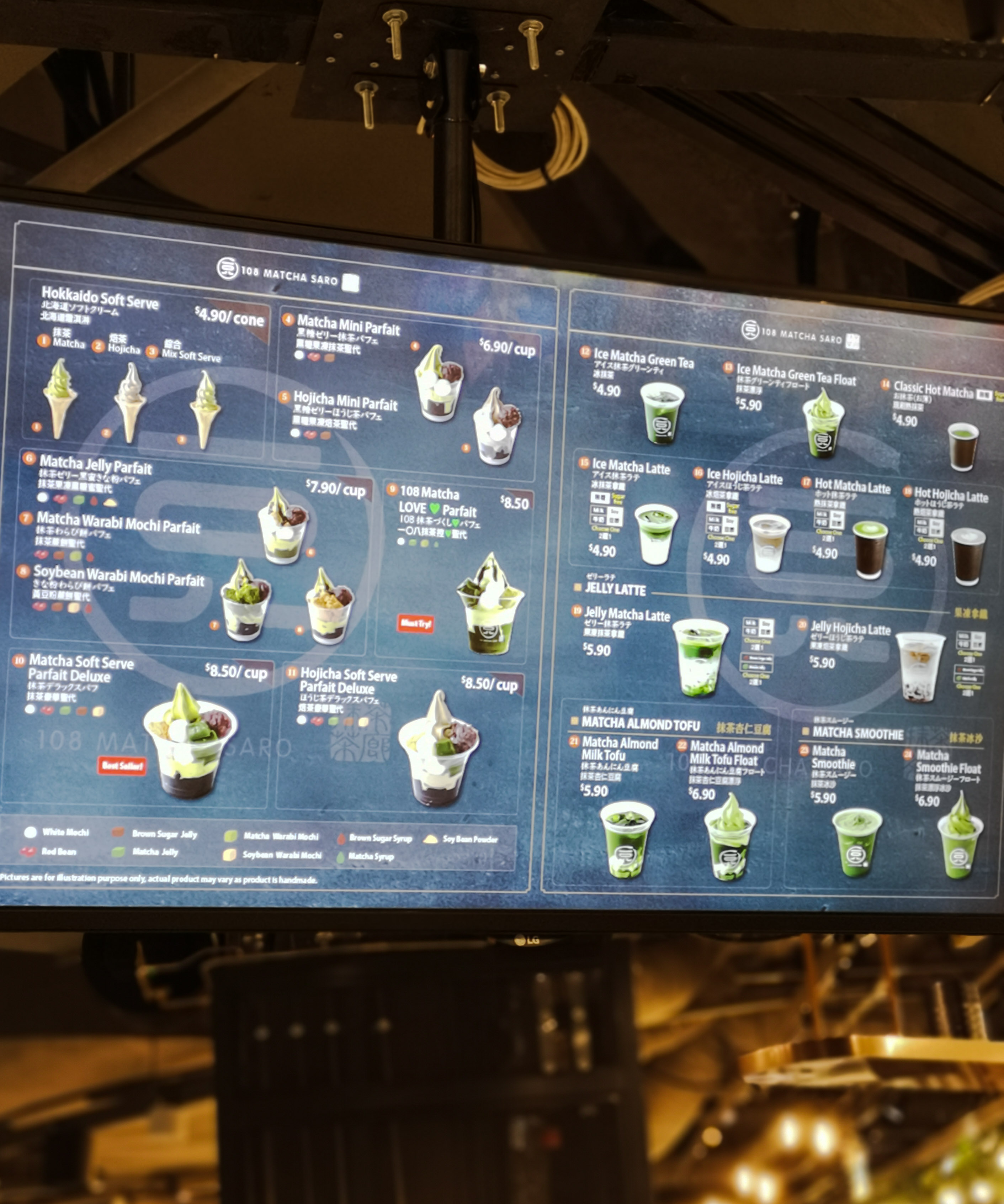 Situated at the same area where Food Republic, Soup Restaurant and Bali Thai used to be located, Suntec City Mall had made major changes to that particular area in Basement One; with the closure of all the shops within the cluster, the space had since been expanded to include a wider variety of F&B establishments to the mall, with some previous tenants having moved to a new space within the cluster, whilst also seeing the addition of other names such as Aburi-En, MOS Burger and The Salted Plum added to the mall. Taking up a rather spacious kiosk within the said area, 108 Matcha Saro is one newest Matcha-based establishments to have arrived in Singapore shores, following the likes of Tsujiri, as well as local born-and-bred brands Hvala and Matchaya. Being much of a takeaway store, 108 Matcha Saro’s stall at Suntec City Mall is Southeast Asia’s very first; the brand also operates several other stores abroad, namely in Taipei, Taiwan, and Japan, having originated from Hokkaido, Japan. Serving up a selection of desserts that pretty much revolves around Matcha, much of 108 Matcha Saro’s offerings in Singapore are focused on Matcha and Houjicha soft-serves and parfaits, as well as a wide array of Matcha/Houjicha beverages. Apart from serving soft-serve and beverages, 108 Matcha Saro is also known for their Obanyaki selection, whilst also offering items such as Warabi Mochi as well. 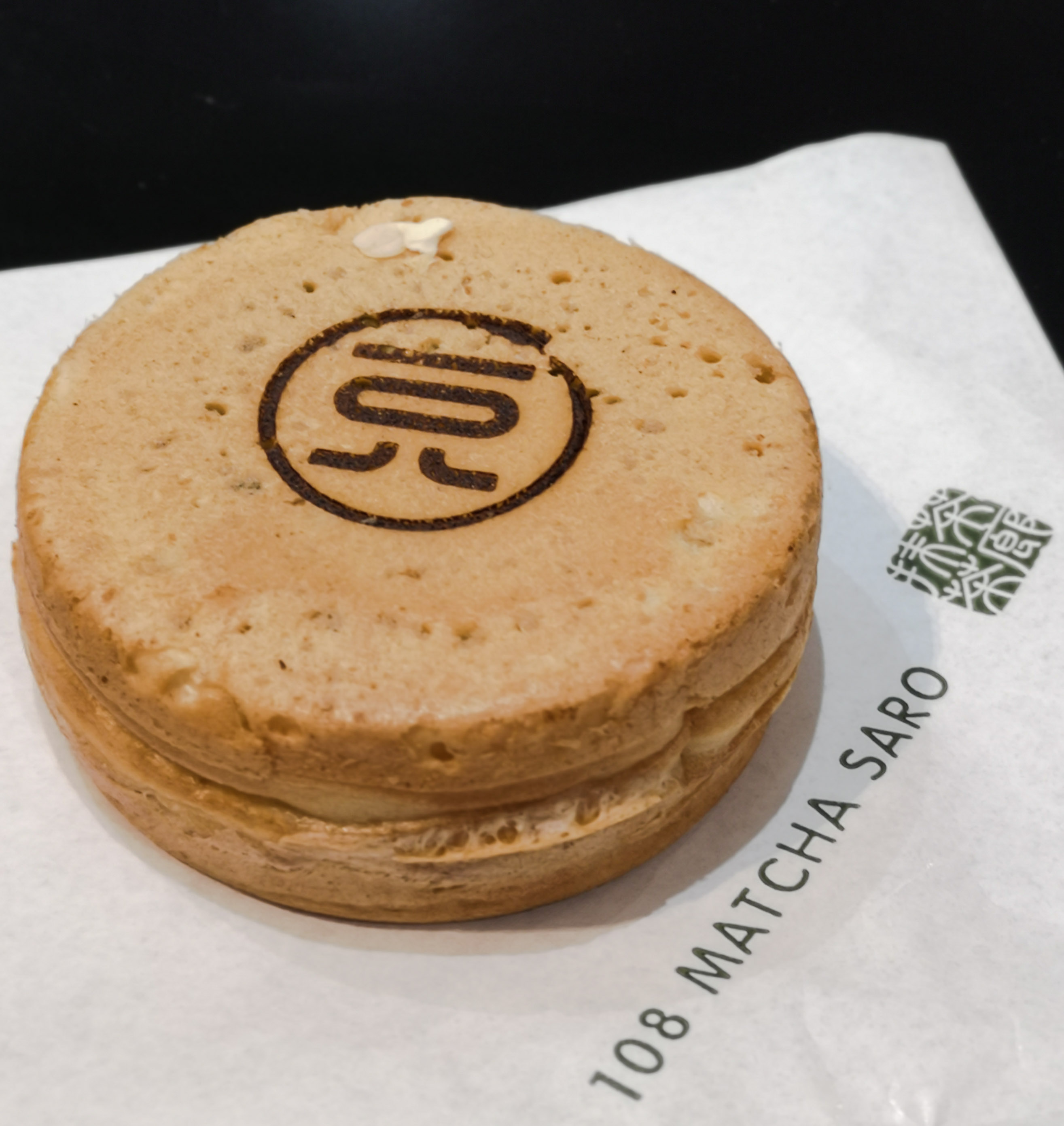 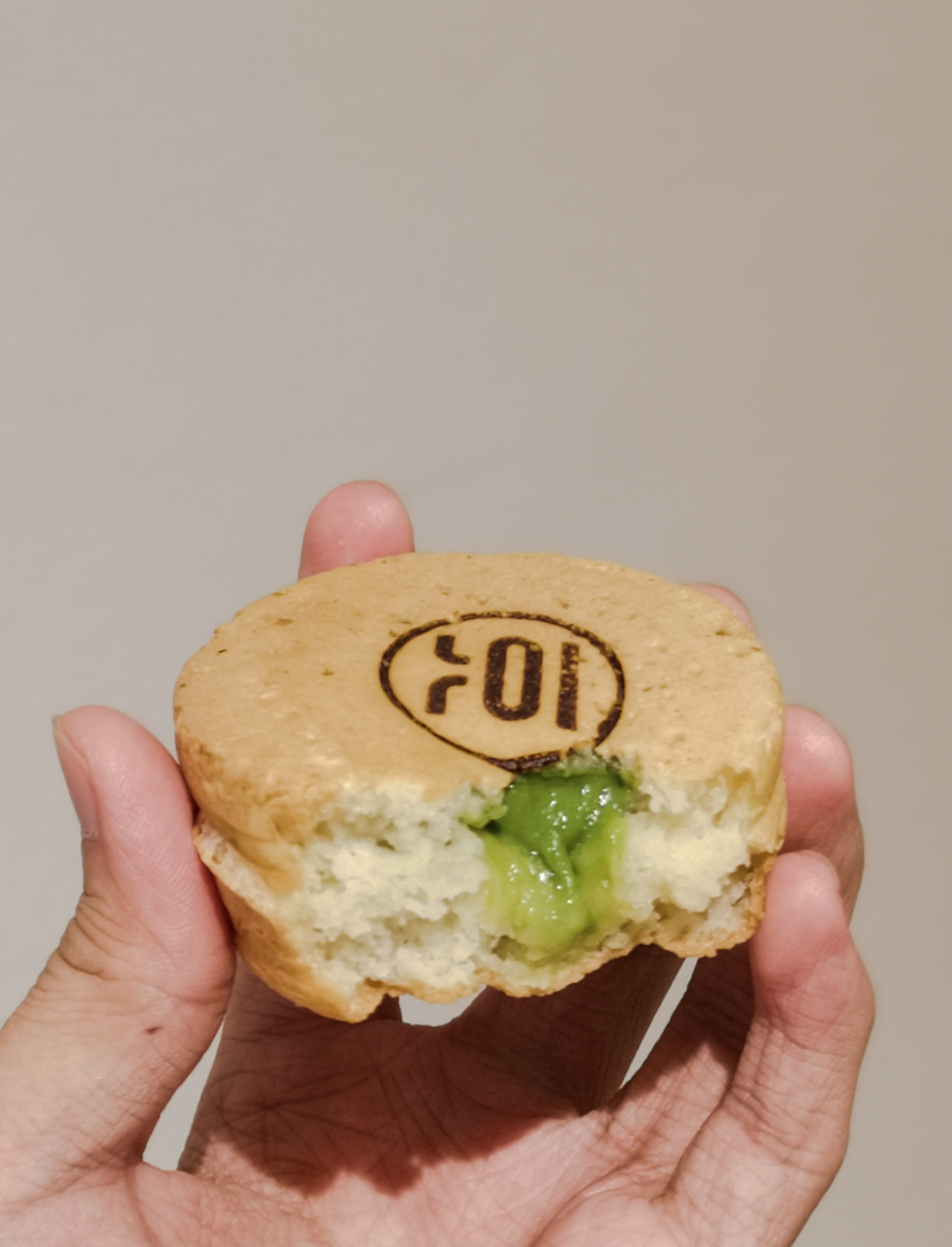 Being well-known for their Obanyaki, 108 Matcha Saro serves up Obanyanki with several flavours to choose from. Given how their focus is seemingly on their Matcha-based offerings, we went straight with the Matcha Custard + Original Dough. It is worth noting that patrons can choose to go for the Obanyaki ala-carte, though those whom are interested to try all five flavours that they have to offer at one go can also their Matcha Obanyaki, 5pcs in one box, which allows patrons to go for all five flavours at once. Sinking our teeth into the Obanyaki, it is worth noting that the Obanyaki was chewy without feeling overly dense; the dough not being rather easy to chew off, carrying a little bit of tension whilst not being particularly cakey. Whilst the first bite reveals a little bit of the Matcha Custard, the Matcha Custard starts to show by the second bite; a pretty decent portion considering how well-filled it was. The Matcha Custard carries a hint of bitter matcha, alongside the usual smooth yet dense custard without pockets of air that is usually served in quality Obanyaki; one that is mildly sweet yet slightly buttery, whilst not being too liquid nor molten yet creamy. Given how well-executed the dough and custard was, this was one item which we could not get enough of; so much so that we actually got so intrigued that we would definitely give the Custard + Original Dough a try someday, and something which we would most certainly crave for and even miss considering how we have already tried it now. 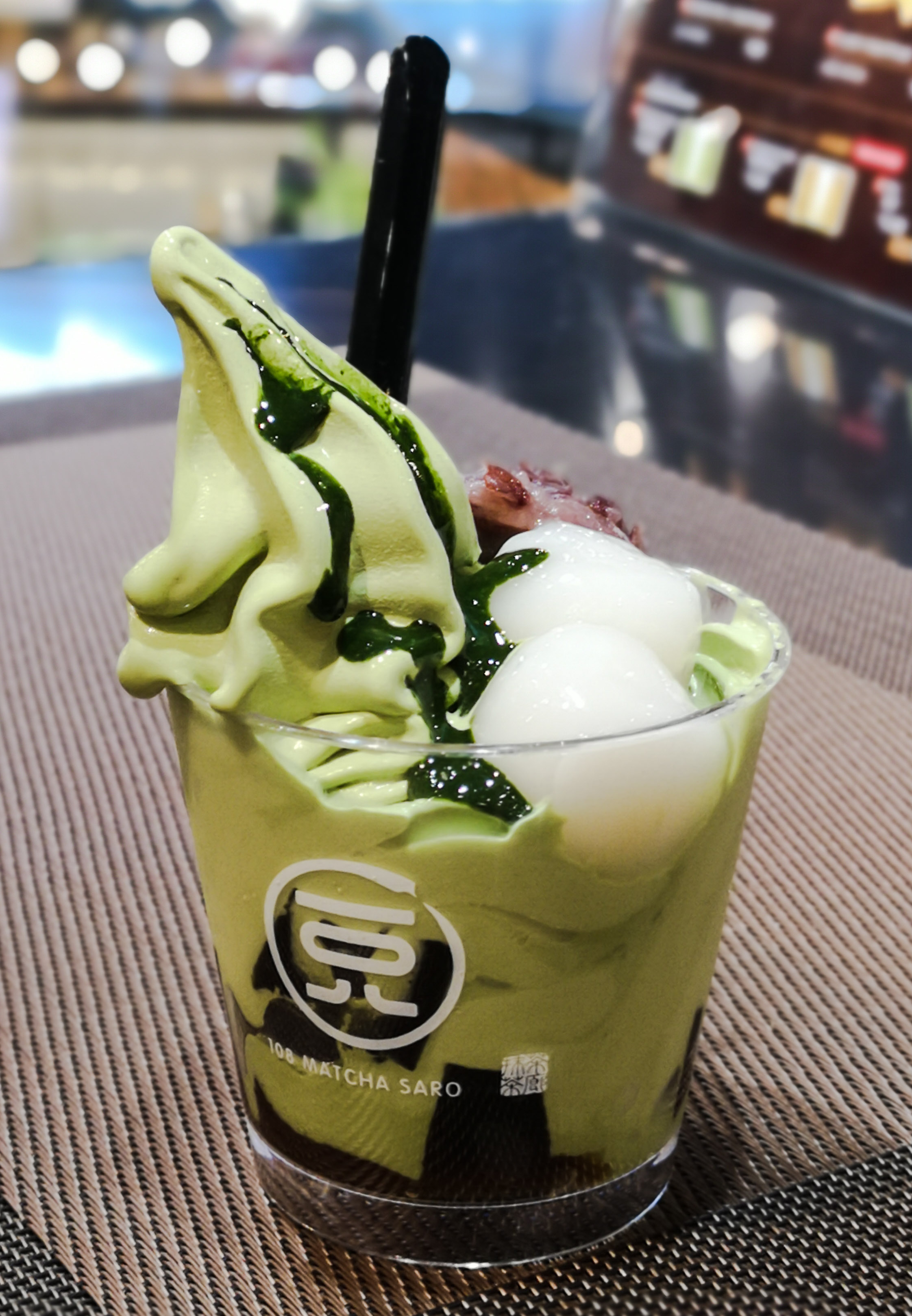 Also trying one of the various Parfaits that they have to offer, we went for the Matcha Mini Parfait; the Matcha Mini Parfait being a smaller cup than the other Parfaits that they have to offer, and comes with White Mochi, Brown Sugar Jelly and Red Bean with a choice of either Brown Sugar Syrup or Matcha Syrup (we opted for the Matcha Syrup for our order). Considering the many stellar Matcha soft-serves/ice-creams that we have around Singapore from established local names such as Matchaya and Hvala, as well as Takashimaya pop-up Tsujiri Honten, the Matcha soft-serve matches well against the competition here. Carrying the bitter notes of Matcha, the intense aroma is relatively undisturbed here; pretty much like a straight tea without any distractions from the addition of sugar or sweeteners, which puts it somewhat close to the soft-serve served at Tsujiri Honten during its yearly pop-up at Takashimaya Food Hall, though with a creamier consistency that is slightly milder in comparison, though would still certainly hit well with Matcha purists given its evident aroma. The other elements help to add a flavour contrast and textural contrast to the parfait; the brown sugar jelly helping to add a mellow sweetness whilst being soft without being sticky to the teeth, while the white mochi is pretty much neutral and provides much of a chew without requiring too much effort to bite through, and the red bean helping to add an earthy note to the soft-serve. The Matcha sauce helps to enhance the flavours of the soft-serve; a pretty rich and intense sauce that adds on to the bitter undertones to the soft-serve itself. An item that would hit the taste buds of Matcha lovers, especially those who would enjoy their Matcha desserts to be kept pure and undisturbed. 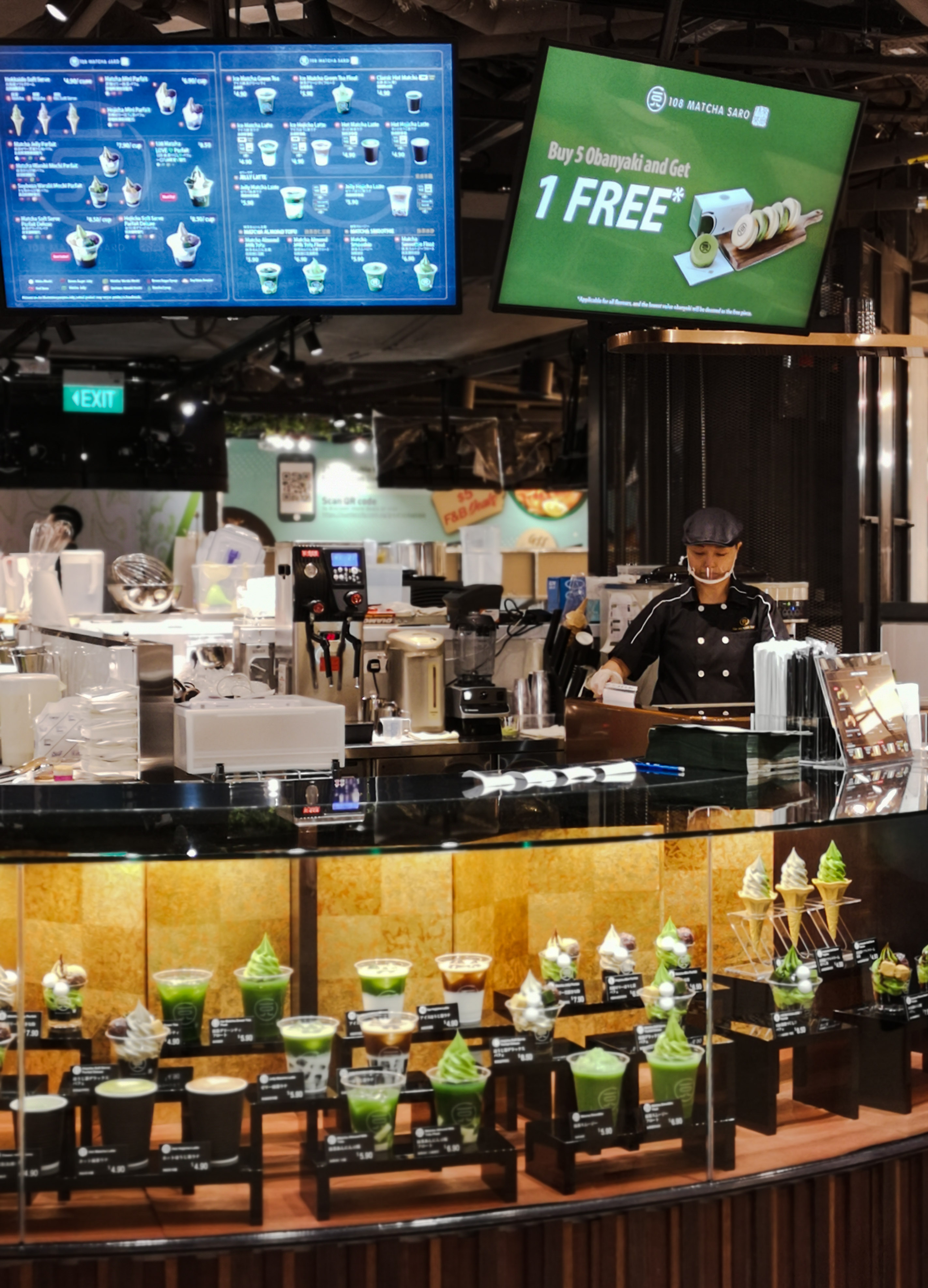 Given the small number of Matcha specialty stores in Singapore, 108 Matcha Saro is a great addition to the ever-changing food scene of Singapore. Whilst Hvala, Matchaya, and Tsujiri-Honten do appeal to their own niche groups of customers who may prefer different types of Matcha-based desserts, 108 Matcha Saro does also seem to provide the masses yet another option for quality Matcha-based desserts and beverages to go for. No doubt the set-up may be less elaborate than the other two local brands, however, Tsujiri-Honten does prove that it is possible to attract the crowds as long as the quality is achieved; something which 108 Matcha Saro seems to have done pretty well despite being just opened for a few days when we made our visit. Located in a pretty convenient spot within the Little Red Dot, 108 Matcha Saro is a place that Matcha lovers should probably add to their to-try list; a place that we would certainly look forward to revisiting again to solve those Matcha cravings. We guess it is a matter of time that the queues would start forming for 108 Matcha Saro for their Obanyanki and Soft-Serve/Parfaits; a place to keep a lookout for.