Taking over the former premises of Aloha Poke at Amoy Street, the folks behind Nesuto and 52 Sandwich Shack had opened their latest venture, Chichi House. 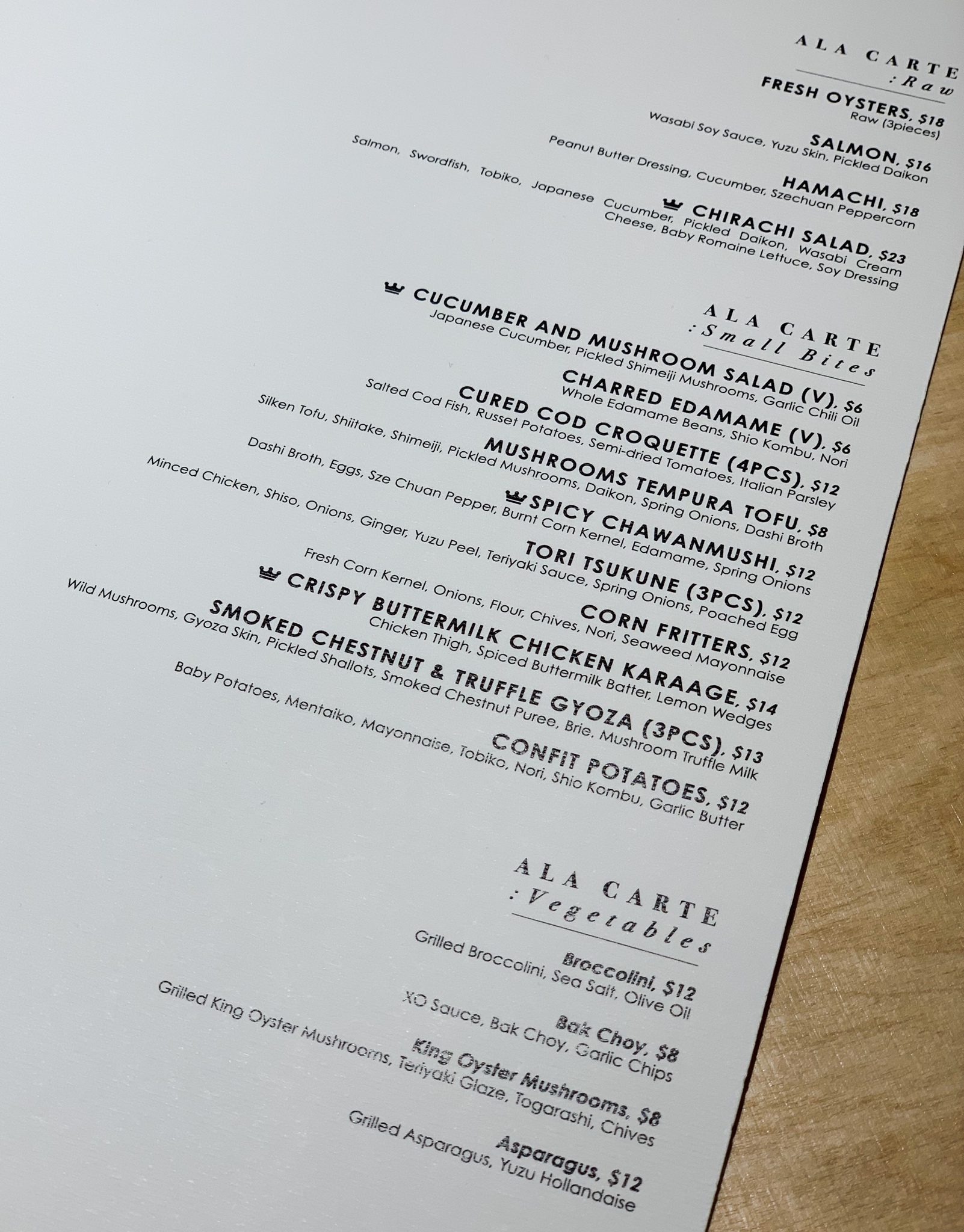 Situated in the heart of the Central Business District, Chichi House is a new establishment which aims to serve up modern Japanese fare. Being decked in a clean, yet modern design language, the furniture and fittings of Chichi House is relatively simple, yet evoking a minimalist style without being under-decorated. Making use of dim lighting to set the mood of the space, we liked how they had made use of spotlights especially directed to the tables to create a striking ambience that helps to draw the attention of the diners to the food served on the table. Being a casual dining establishment, Chichi House serves up both an ala-carte menu, as well as a set menu featuring multiple courses, as well as a beverage menu that carries both alcoholic (i.e. cocktails) and non-alcoholic options (i.e. Japanese Green Tea) that would pair well with the items that they have to offer. 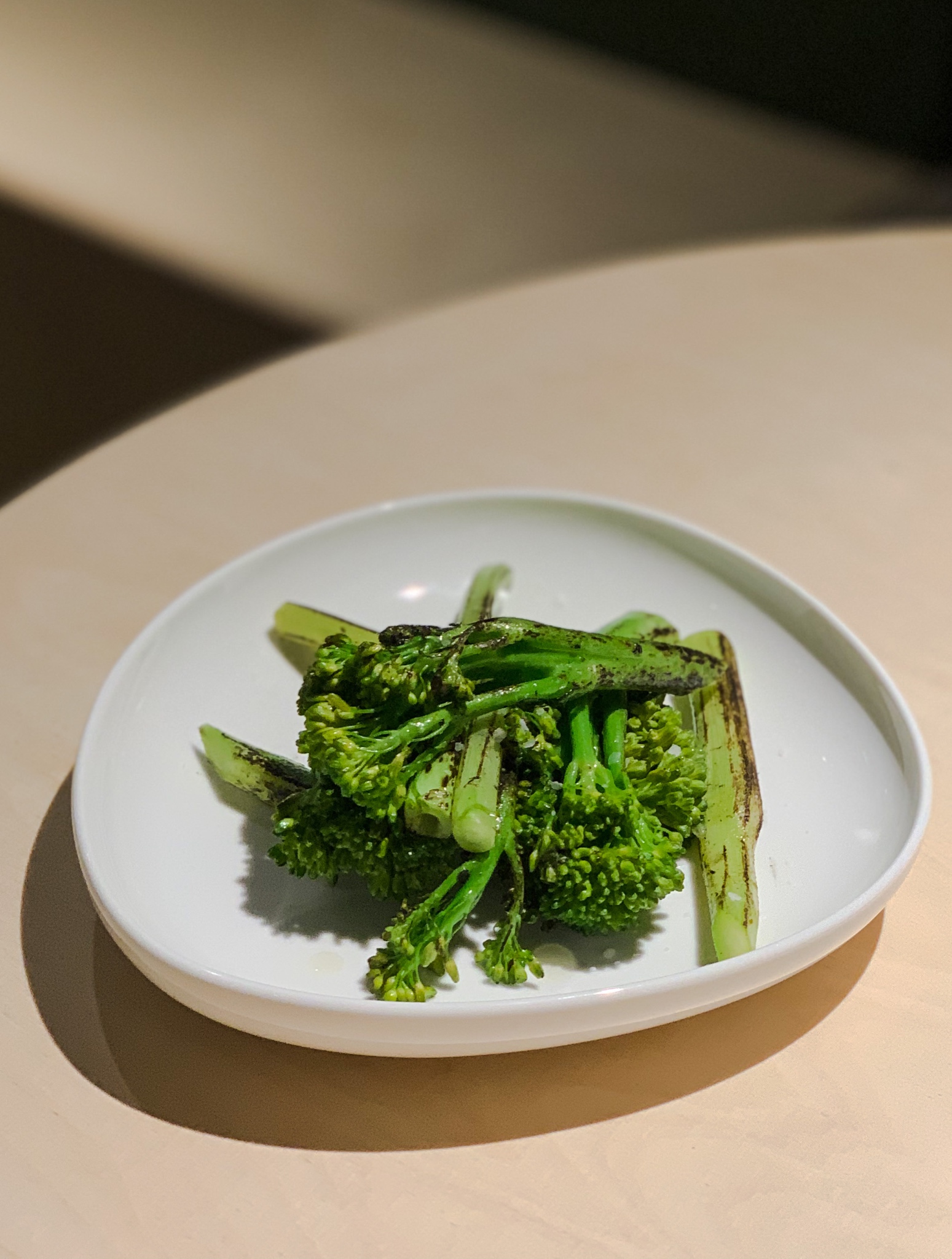 Going for an item off the “Vegetables” section of the menu, we went for the Broccolini, which features elements such as grilled broccolini, sea salt, and olive oil. The grilled broccolini came with a slight char; smoky and comes all crunchy and with a hint of smokiness for an extra oomph. A pretty simple, but refreshing accompaniment to the meats and seafood dishes that they have to offer here. 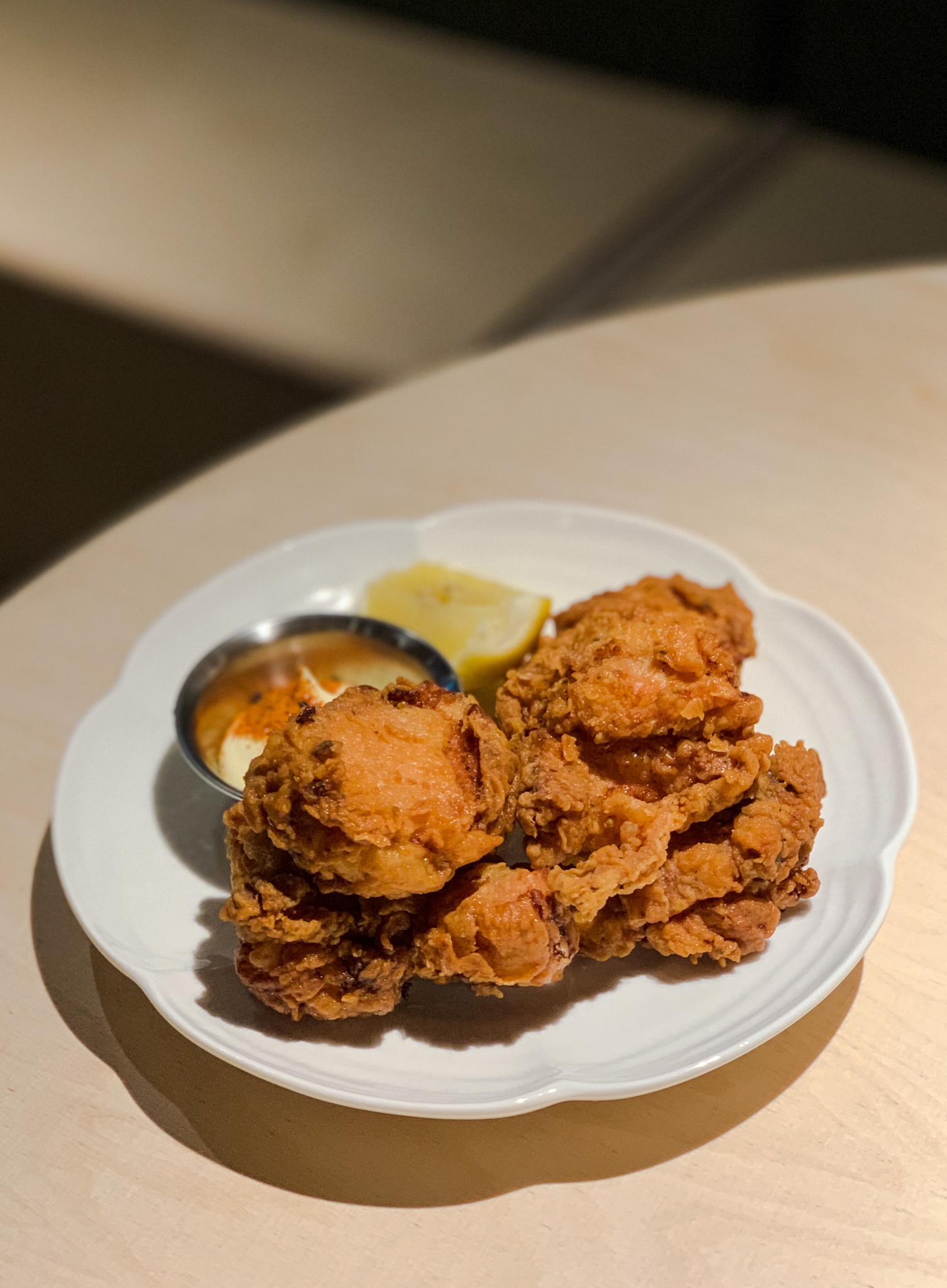 Also giving their small plates a try, we ordered the Crispy Buttermilk Chicken Kaarage; a dish that features Chicken Thigh, Spiced Buttermilk Batter and Lemon Wedges — a dish that caught our attention considering our love and cravings for fried chicken that day. While sounding relatively simple, the Crispy Buttermilk Chicken Kaarage was an item that we felt was particularly well-executed. Being generally boneless except for the front and back portion of the thigh, the chunks of chicken were well-sized, giving one a good, meaty bite that fits two bites — enough to savour its briny flavours without feeling particularly repetitive. We also liked how the batter was crisp on the exterior, while the meat was tender, juicy and succulent — very easy to eat. Coming with Japanese mayonnaise on the side, the mayonnaise also comes spiked with Japanese spicy powder for an extra kick of spiciness amidst the creamy, umami note that the Japanese mayonnaise provides. 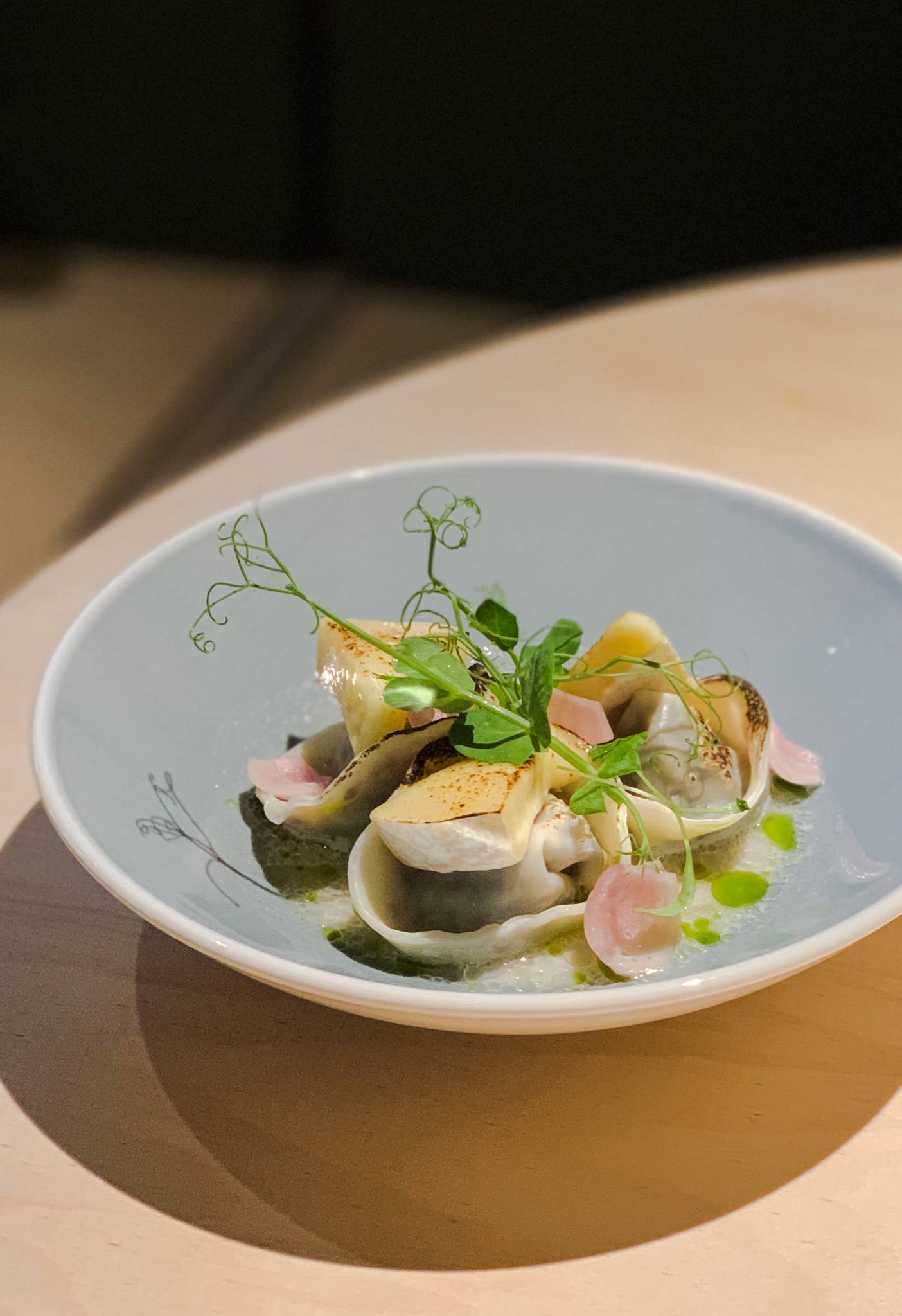 One of the items that caught our attention very early on whilst skimming through the menu of Chichi House was the Smoked Chestnut and Truffle Gyoza. Perhaps one of the more inventive dishes on the menu at Chichi House, this dish features elements such as Wild Mushrooms, Pickled Shallots, Smoked Chestnut Purée, Brie and Mushroom Truffle Milk — patrons are encouraged to enjoy the dish by having a little bit of every single element in a single mouthful. Popping the gyoza into our mouth, one would be able to notice how well-sized the Gyoza is to fit a single mouthful — the skin being of sufficient thickness to hold up to the fillings within without breaking, while that not being too thick in terms of mouthfeel. Chewing through the various elements within the Gyoza and the elements to be had with the Gyoza, the Gyoza comes with a burst of flavours from the earthiness of the mushrooms, the aroma of truffle perfuming throughout the entire dish, and the slight hint of cheesiness of the Brie — all of which complemented by the destined of the shallot and mellow of sweetness of the chestnut, whilst being further enhanced by the mushroom truffle milk at the bottom. A pretty creative take on a crowd favourite, and a testament to Chichi House’s vision to serve up modern Japanese cuisine. 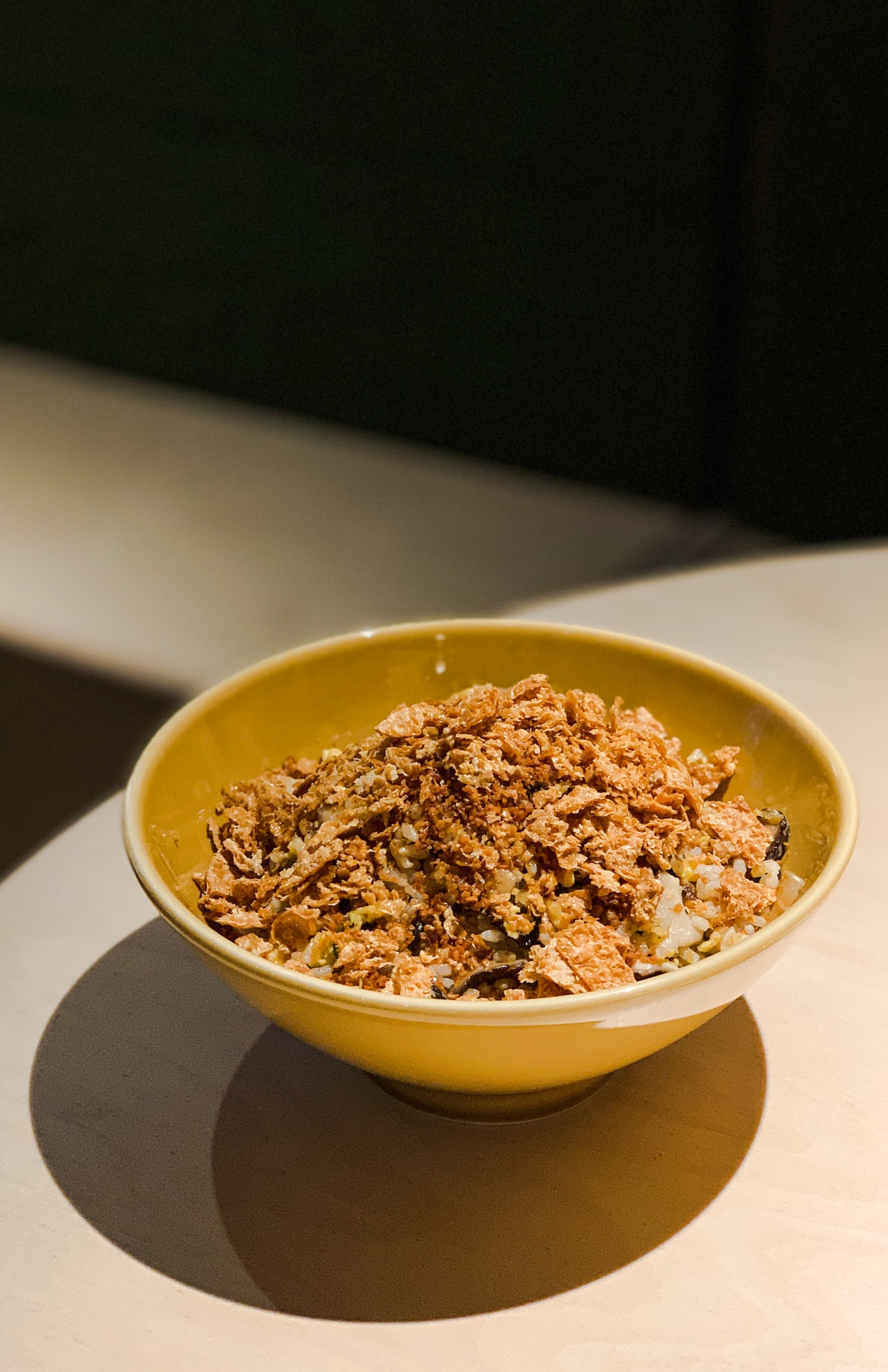 Our choice of main was the Fried Brown Rice; a dish that featured Garlic Oil, Shiitake Mushrooms, Eggs, Hijiki Seaweed, Japanese Brown Rice, Crispy Beancurd, Garlic Chip and Spring Onions. This was essentially Chichi House’s twist to the Garlic Yakimeshi, which is also known as Japanese Fried Rice — carrying the very same, fragrant garlicky notes as the Yakimeshi that it is inspired from, we loved how the Fried Brown Rice attempts to take things to the next level by providing a healthier option with the use of Japanese Brown Rice as opposed to regular white rice, whilst also featuring crispy beancurd sheets similar to that served at local vegetarian establishments for a crisp texture and a beany flavour that further compliments all of the flavours going on in the fried rice. Being folks who typically skip out on the rice dish, we found ourselves finishing the item in no time — all that without feeling overwhelmed, and possibly even craving for a second serving. 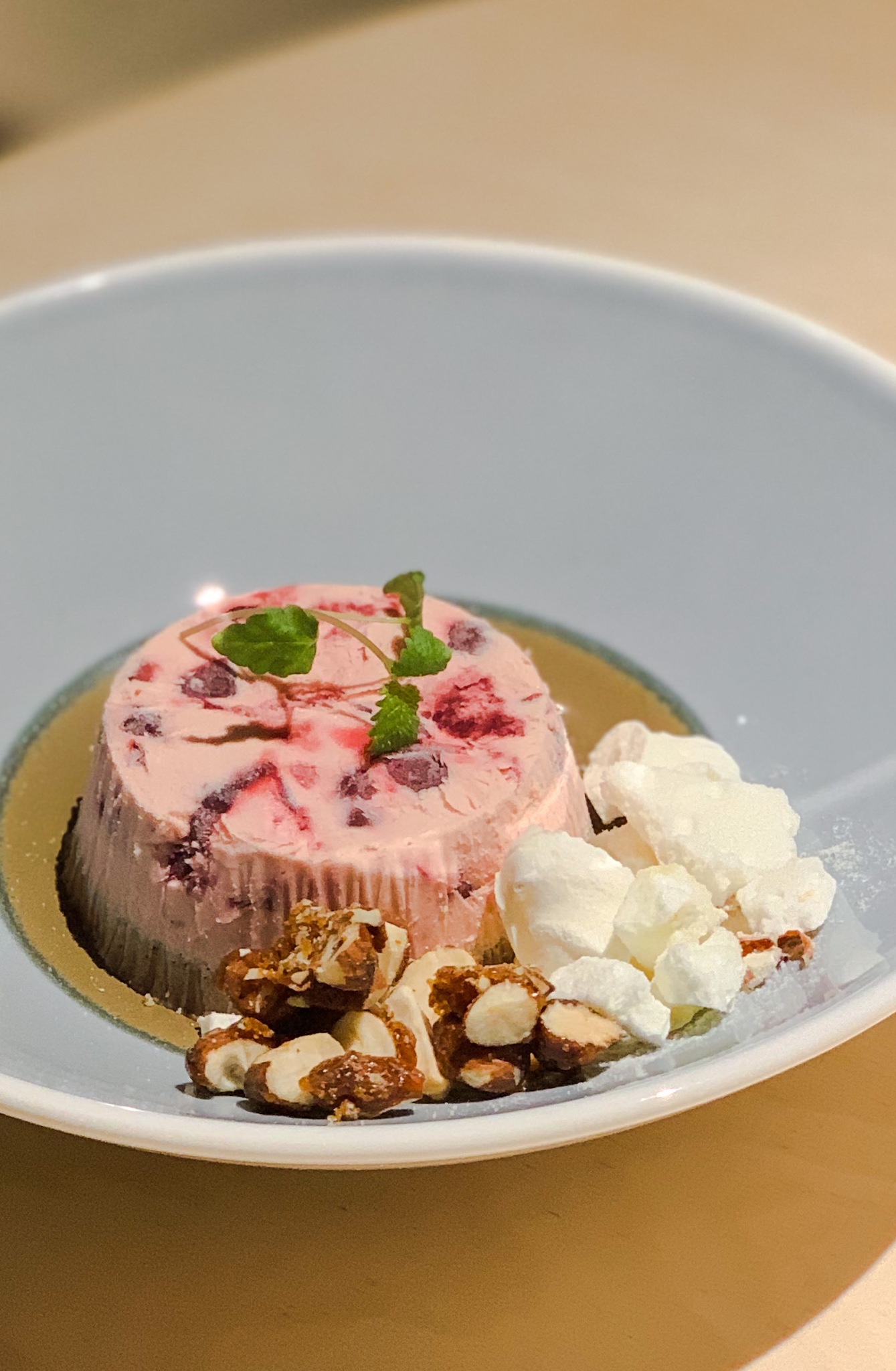 Ending off our meal at Chichi House with a dessert, we went for the Semifreddo, which is a frozen cream dish that featured elements such as Sour Cherry, Valrhona Chocolate, Meringue and Caramalised Almonds. The dessert feels like their own take of the Neapolitan, featuring a combination of flavours such as chocolate, sour cherry (replicating berries) and meringue (replicating that of Vanilla). Served to the table being frozen, the Semifreddo is best enjoyed in its semi-frozen state where the cream starts to melt just by a bit, allowing one to easily scoop into the cream using a spoon. We liked how the variant here seemingly used a classic flavour profile, yet giving it a slight twist by switching up some of the components; the nibs of sour cherries were particularly appealing given its tartness against the mellow sweetness of the 63% dark chocolate. Both mousse layers were also undoubtedly creamy and rich, while the meringue helps to provide a near-neutral sweetness and provided a light, airy crunch with the crunchy and nutty caramelised almonds that helps to provide a contrast of textures to the dish and provide a balance in between the various flavour profiles as well. A pretty thoughtful dessert overall. 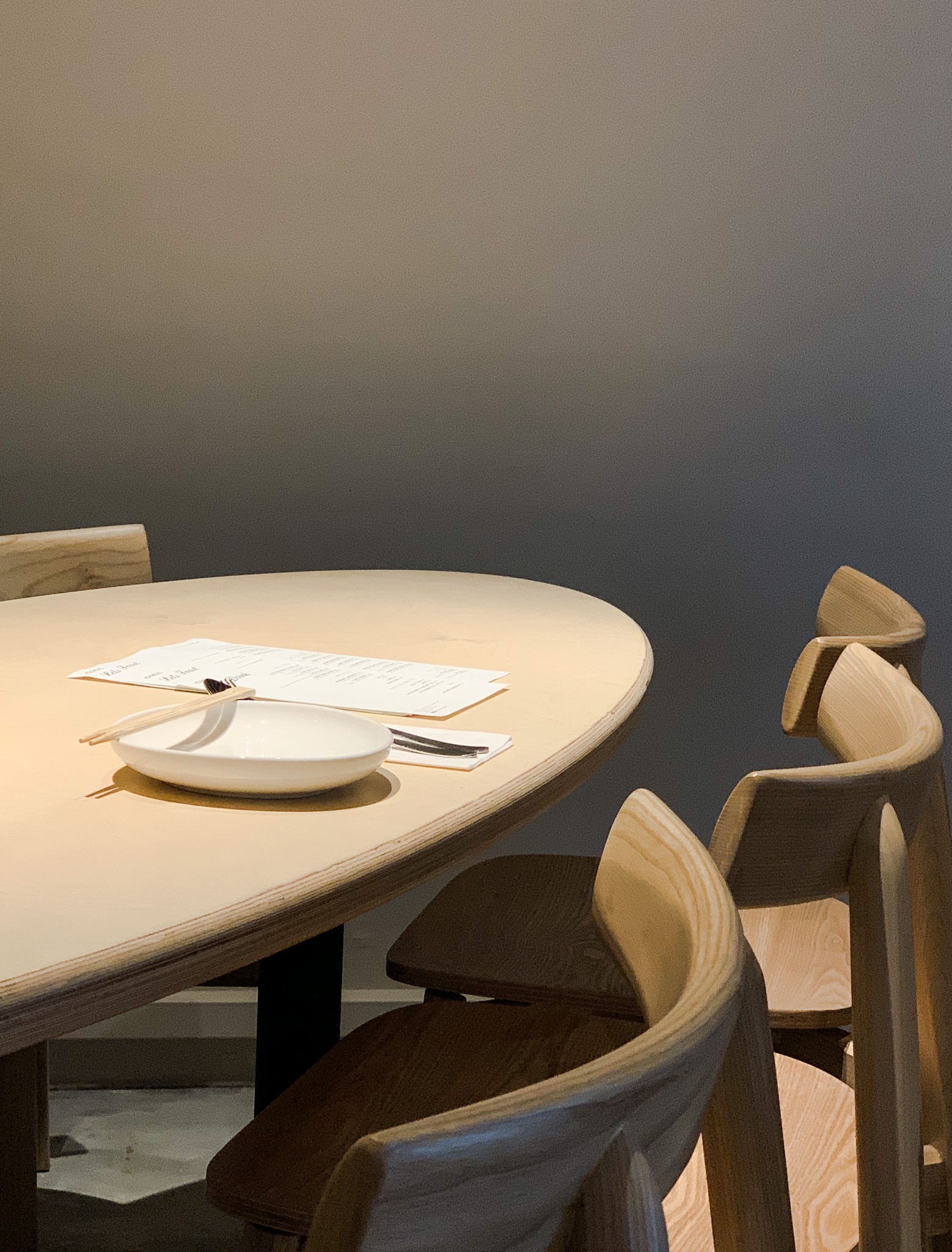 Being an establishment which aims to serve up Modern Japanese dining, Chichi House does seem to present quite a few innovative takes on Japanese food; this is especially so when it comes to the Smoked Chestnut and Truffle Gyoza, which sees quite an adventurous and creative adaptations of ingredients into a classic Japanese dish. That being said, we felt that the menu offerings feel very loosely tied to the concept; perhaps this could be due to the items which had chosen to order, considering the more conventional items that we have ordered such as the Fried Brown Rice and Crispy Buttermilk Chicken Kaarage, though we felt like dishes such as these felt closer to being “Contemporary Japanese” than Modern Japanese considering how the Fried Brown Rice seemed more like a Japanese item with a local twist instead. That being said, we felt that the vibes at Chichi House were on-point; the dim lighting being pretty suited for the occasion, providing a relaxed and intimate dining experience that works well for date nights especially, while the service was also on point with their staff being helpful it providing their recommendations, whilst also taking the time to explain the various dishes and elements in each dish as they were being served up; something which is worth commending. Given how Chichi House is pretty much a casual dining establishment situated in the heart of the Central Business District serving an ala-carte menu at an affordable price point, Chichi House is likely to be a spot well-liked by office folks in the area, or casual diners looking for a destination for a date night or somewhere for an intimate catch-up, as well as group gatherings considering the few dining tables that could accommodate up to six pax. Chichi House is a spot with quite a fair bit of potential, and it pretty much shows it what it has to offer; thoughtful dishes that are well-designed to hit the spot be it in terms of flavour or texture, and somewhere which we do have intentions of revisiting in the near future.