It is always interesting to see how new establishments seem to push local/Asian cuisine beyond its own boundaries, especially with the current wave of resto-bars that had been sprouting up across the island. 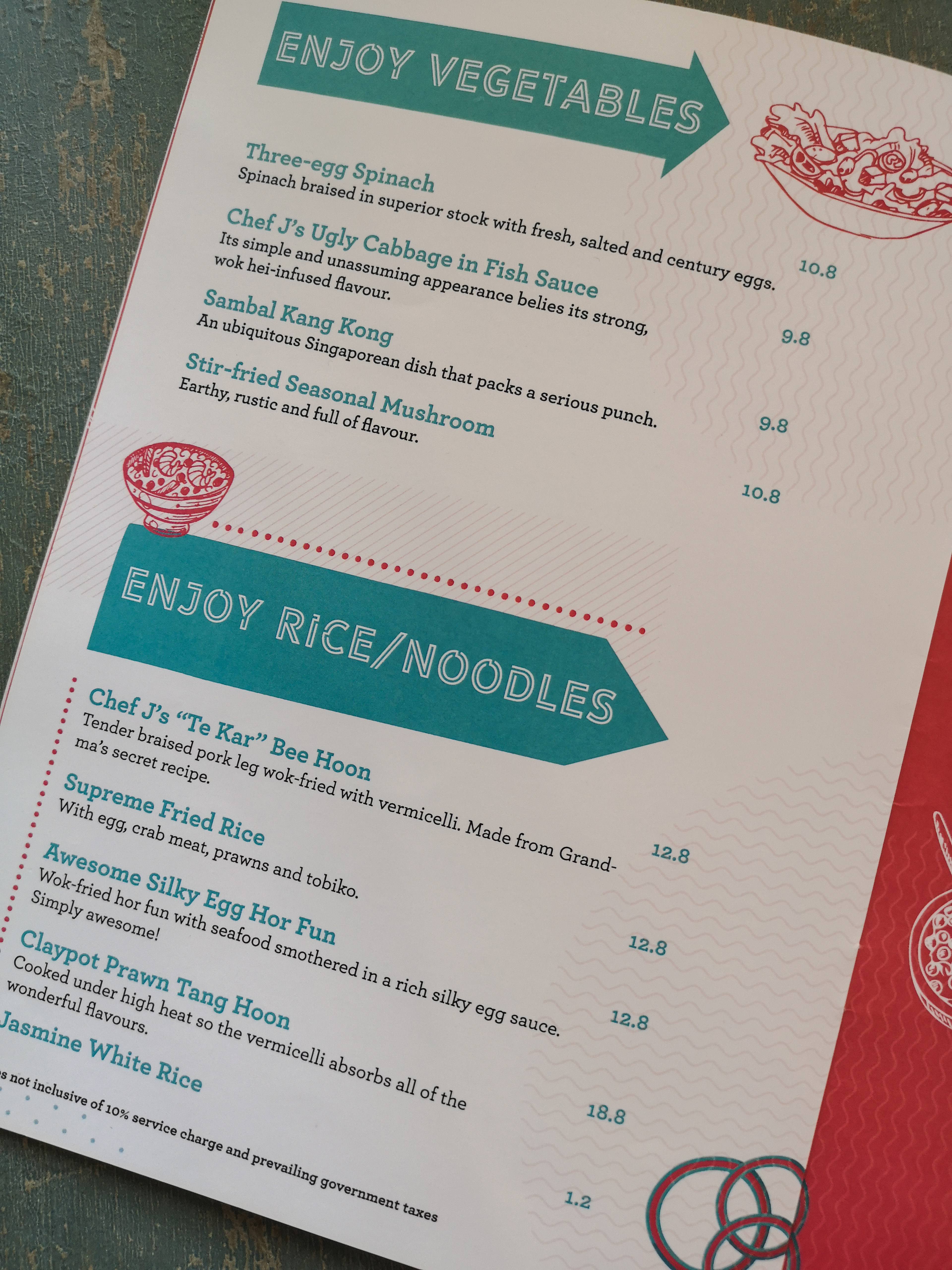 Taking over the former premises of Sin Hoe Huat Cafe (or for those who are more familiar with the tenant before, which is the now-defunct Suprette), Enjoy Eating Bar is a new resto-bar that is located within the grounds of Kam Leng Hotel along Jalan Besar; the hotel being a heritage hotel that had since been revamped with a touch of hipsterism for a more modern, yet retro look. Enjoy Eating House & Bar seems to fall in place nicely within the refurbished hotel, given how the eatery itself focuses on local cuisine, though with their own twist; a very fitting establishment to the heritage hotel itself. The eatery is decked in pastel colours; a playful vibe with elements that scream retro, from the wallpaper featuring Peranakan tiles used at the bar counter area, all the way to the small decor placed on the shelves around the shop space. Otherwise, the windows, which are part of the architecture of the building, helped to further evoke that retro theming to the establishment. Being an eating house and a bar, Enjoy Eating House & Bar’s menu is split into two sections; one being the ala-carte food menu which features appetisers, starters, rice/noodle dishes as well as communal sharing plates, while the drinks and bar bites menu features the various alcoholic and non-alcoholic beverages available, as well as finger food (some of the items also being listed in the ala-carte food menu, though at a lower price which probably suggests a smaller portion size) that would pair well with the alcoholic beverages. 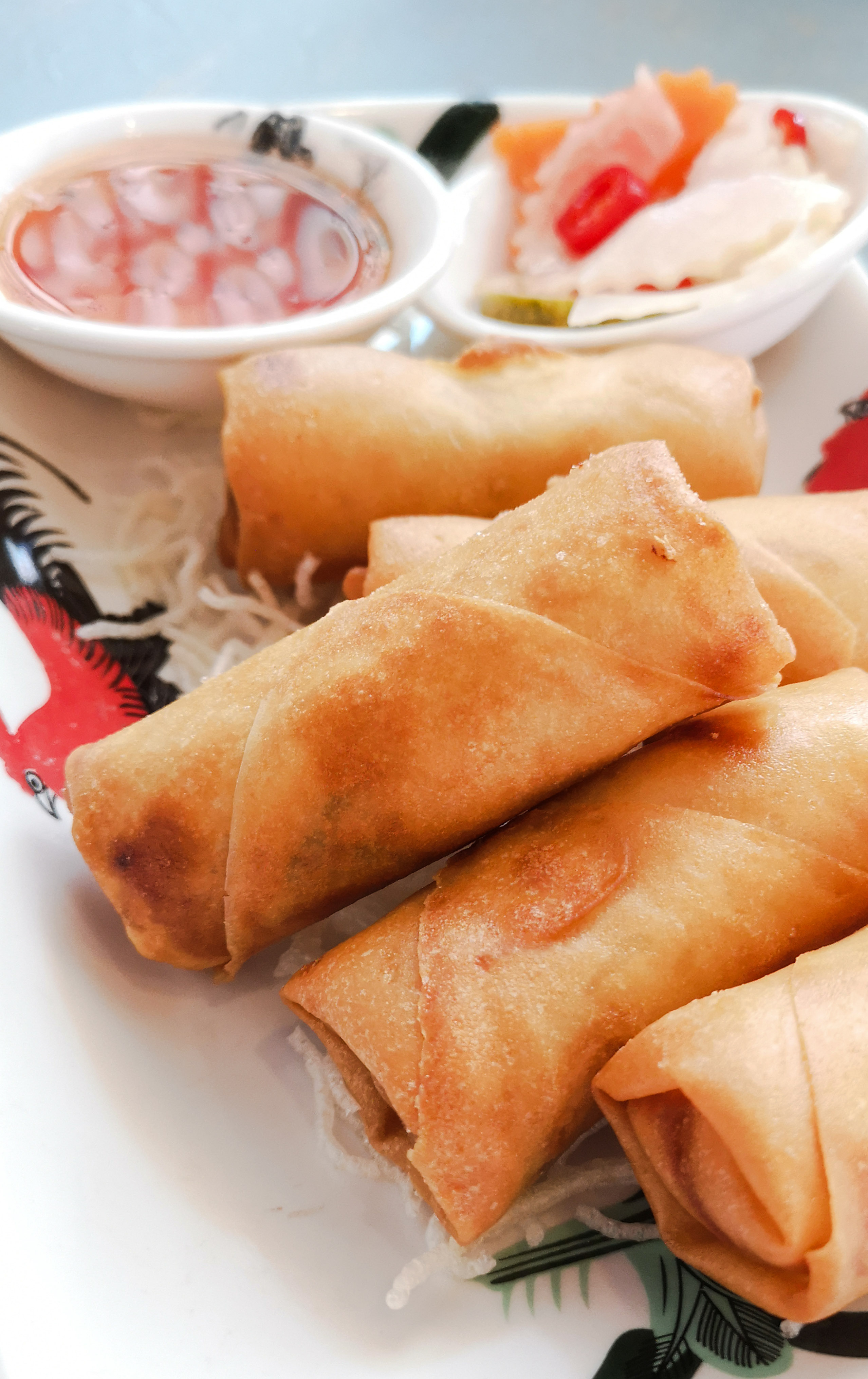 Going for one of the appetisers, we picked the Crispy Spring Rolls, which were described as “deep-fried vegetarian spring rolls with a light, crispy skin”. Coming in a portion of five pieces, we found the spring rolls to be well-executed. No doubt that this item is more of a crowd-pleaser rather than to be an item to showcase their culinary prowess, but we the spring rolls were indeed light and crisp on the exterior, whilst crunchy in the middle. We also noticed how the spring rolls were also not particularly greasy, while the dish also comes with pickles on the side; a thoughtful touch which helps to cleanse the palate given how this is a fried item after all. 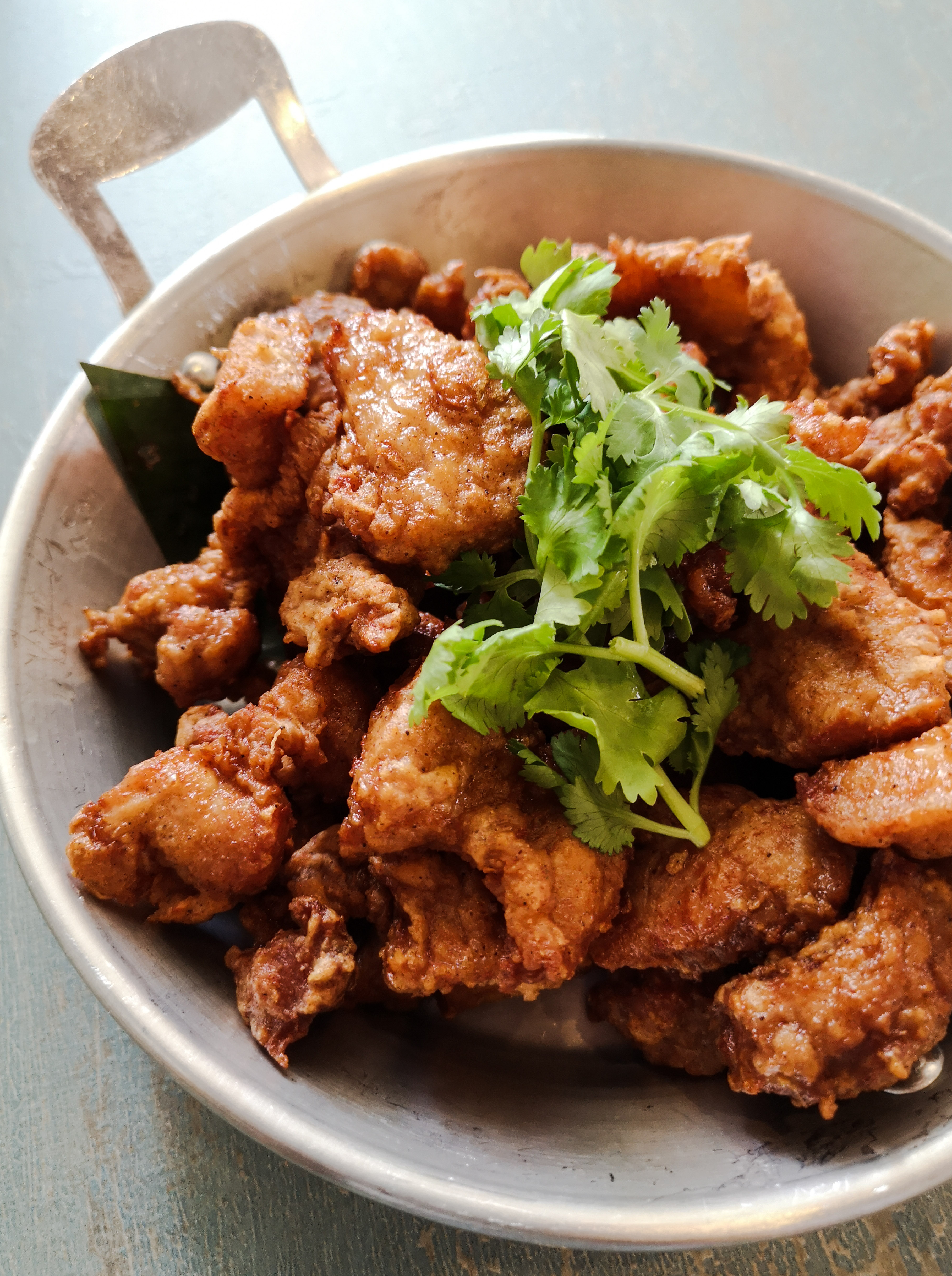 We also went for the Hakka “Nam Lu” Pork Belly; an item which is available on both the ala-carte food menu as well as the bar bites menu, with the former being a larger portion at S$13.80 while our order was off the bar bites menu at $9.80. Marinated in fermented beancurd before being deep-fried, the Hakka “Nam Lu” Pork Belly could have been a little bit crisper but was also noticeably almost free from grease. Sure, the pork belly could have been a little less dry, but we felt that those were all minor issues; the meat did not carry a particularly strong porkiness, whilst also being relatively easy to chew. We also found the pork belly to carry just enough Nam Lu flavour; not too overpowering, but definitely evident. An item that we just simply cannot stop going for at the table. 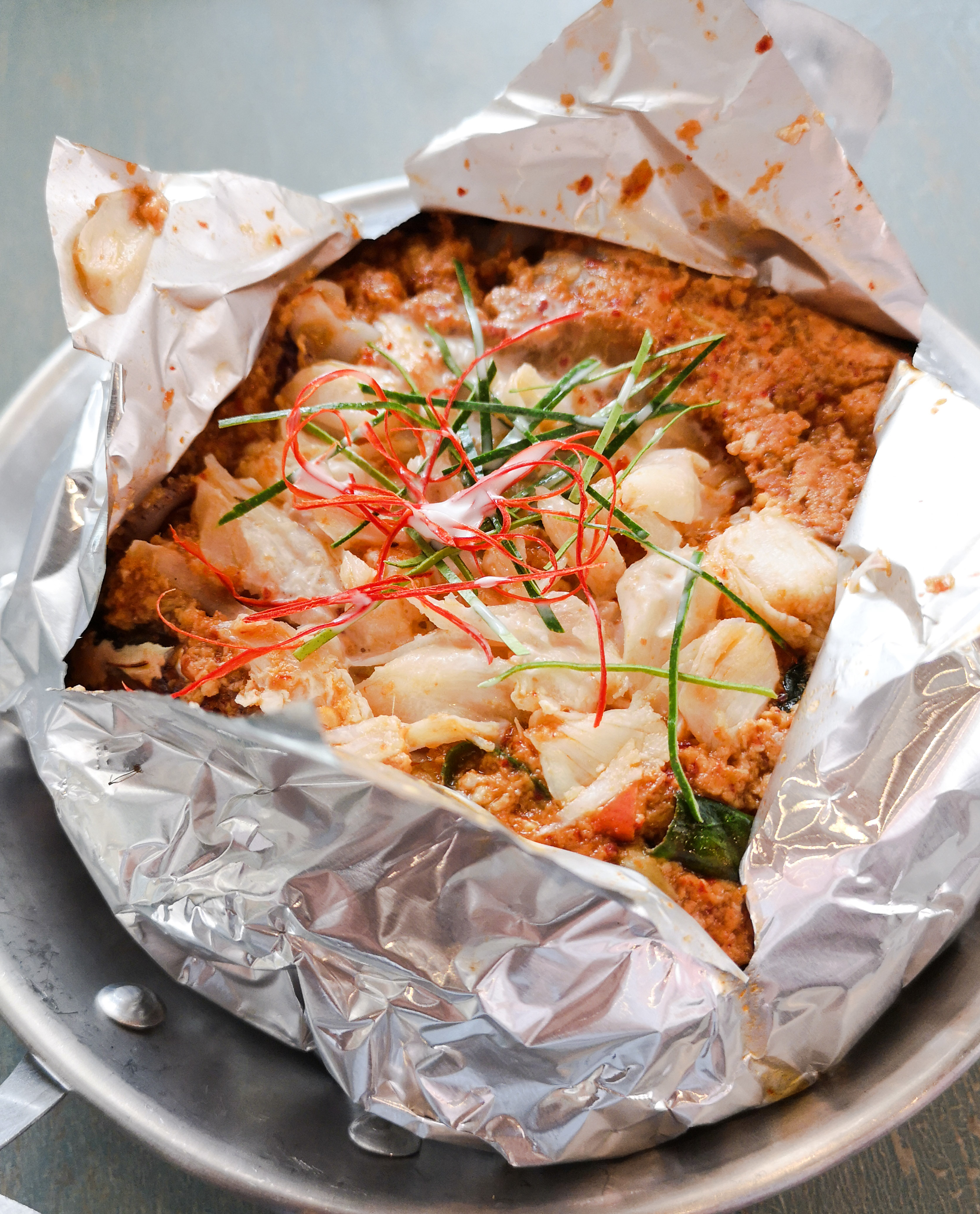 One of the items that caught our eyes while we skimmed through the menu at Enjoy Eating House & Bar online was the Seafood Stir-Fry in Otah Paste. A twist to the usual Otah where the fish paste is often the star of the dish, the Seafood Stir-Fry features a mix of seafood (prawn, fish, and squid being mentioned by the staff) being stir-fried in their house-made Otah paste. The Otah paste carried evident hints of rempah spices for that signature note of Otah, whilst also tasted of coconut milk for some richness, but the addition such as lemongrass and basil helped to provide a slight zippiness that was rather unique; almost akin to that of a Thai-inspired dish, which was fairly refreshing as compared to the Otah paste that we are familiar with. The Otah Paste was also not particularly spicy; fairly easy to handle for those who are able to take moderate levels of spiciness. Seafood was pretty fresh; the squid provides a good chew without being overly rubbery, while the fish helps to replicate that texture that makes it almost similar to that of Muar Otah. Two large prawns were hidden beneath; plump and fresh, carrying its natural sweetness. It is interesting to observe that a layer of cabbage is being lined beneath all the seafood and Otah paste; a thoughtful touch to ensure that the Otah does not get burnt at the bottom while providing a refreshing crunch that gives a good break in terms of flavour between morsels of the dish. 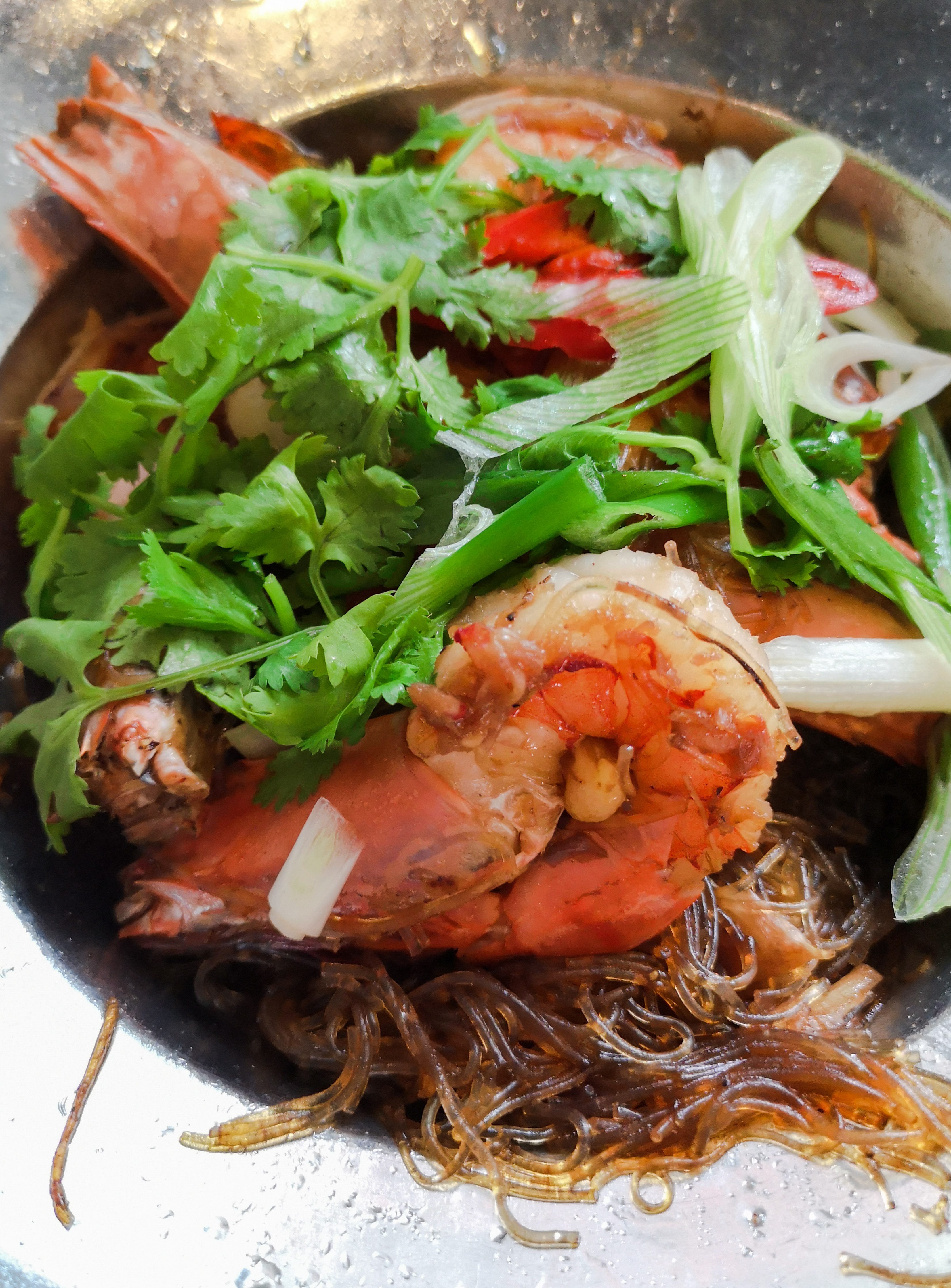 Our choice of carbs was the Claypot Prawn Tang Hoon; a Thai-inspired dish that replicates Pad Woon Sen pretty closely. While the prawns were no doubt large and fresh, the star of the dish was no doubt the glass vermicelli. Cooked under high heat as mentioned in the menu, the glass vermicelli absorbed the flavours of the sauces really well, providing a savoury note to the dish with the greens providing a good contrast to cuts through the savouriness, whilst carrying a slight wok-hei and being all chewy. Pretty simple, yet satisfying overall. 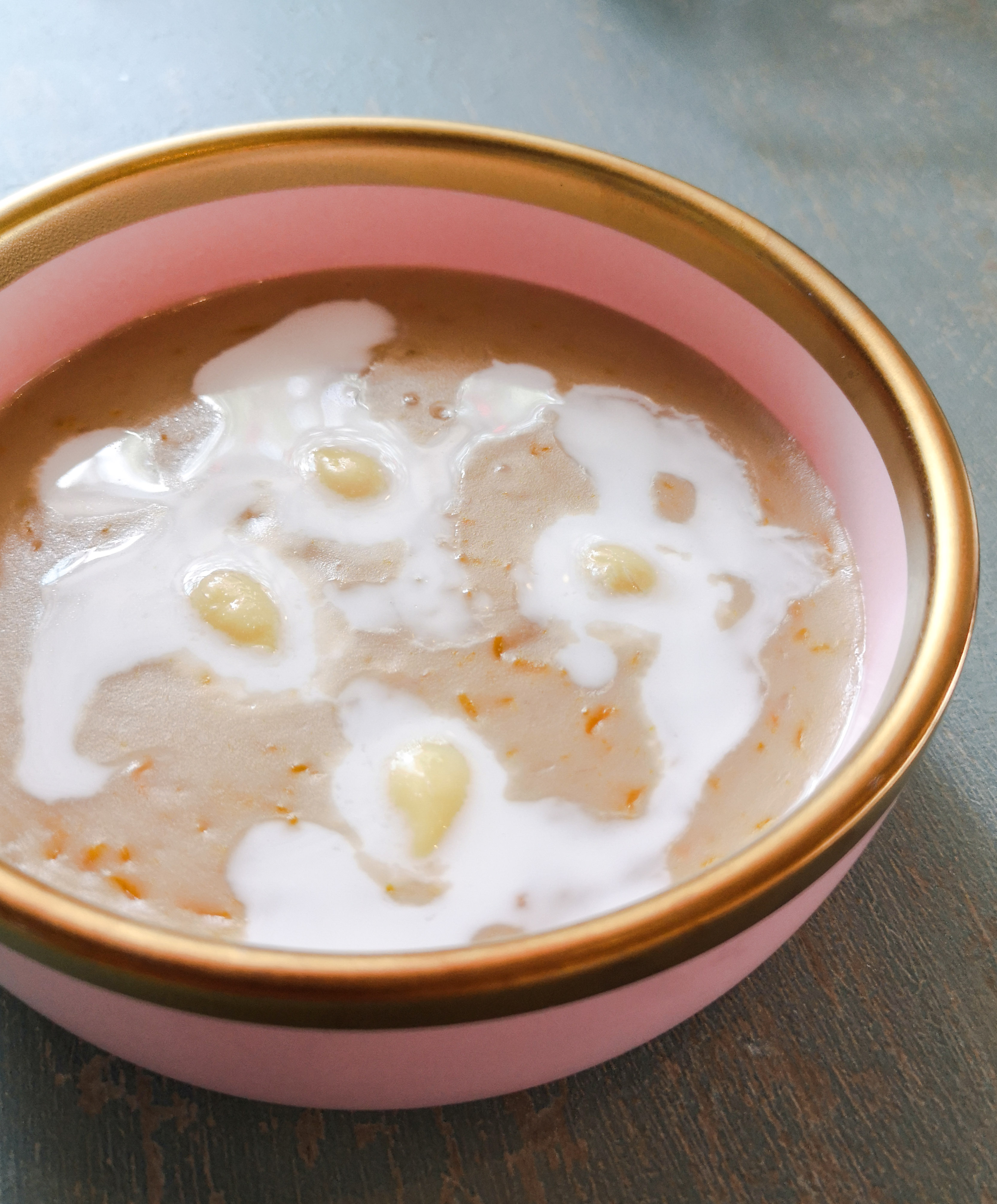 Rounding up our meal at Enjoy Eating House & Bar with the Teochew “Orh Ni”, the traditional Teochew dessert comes served with coconut milk, pumpkin puree and Gingko nuts as well. The yam paste was undoubtedly smooth and creamy, with the coconut milk helping to thicken the already rich and earthy paste together. The pumpkin puree helps to add yet another contrast of sweetness to the dessert, while the dessert was also not overly sweet; the Gingko nuts providing a soft bite while cutting through the sweetness with its slightly bitter aftertaste. A rather well-executed version of the yam paste here. 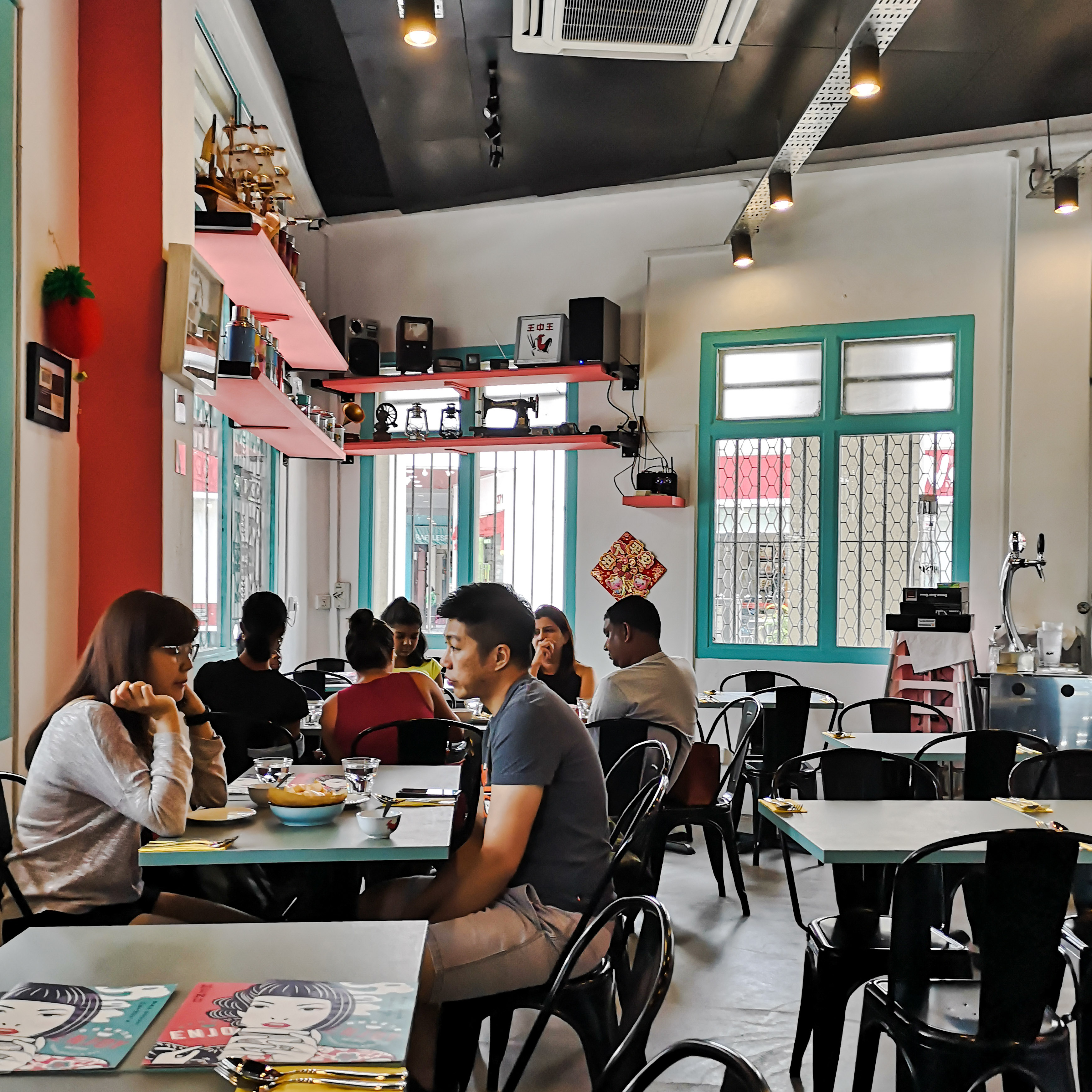 There is no doubt that we left Enjoy Eating House & Bar satisfied; having heard good reviews of the establishment online, Enjoy Eating House & Bar had certainly delivered in terms of the quality of food. The items were tried were mostly hits; no doubt there were things to be improved on in regards to the Hakka “Nam Lu” Pork Belly, we felt that those were just minor issues that could also probably due to our own taste buds at play. The flavours were all on-point, while there are tiny, thoughtful details with the dishes which shows the effort in bringing out the very best for their patrons; very well-rounded recipes with the nitty-gritty details checked in its R&D process, which is seemingly a rarity with F&B establishments these days. Service was also commendable on the day of our visit; though seemingly short of staff on the day of our visit, service was pretty prompt with the staff being rather observant with the patrons with regards to billing, filling up glasses and making orders in general. Enjoy Eating House & Bar is a spot that seems to have the right recipes, good food quality and a decent level of service; everything that an eatery should have; a spot that leaves us wanting for more, we would certainly be back again to try out the other dishes on the menu another time!