The revamp of The Basement at Hong Leong Building had brought about some interesting dining options to the folks of the Central Business District, considering how a number of interesting tenants such as Fu-Men, Sanji Singapore, Noveau Cafe and Monnani had recently moved into its premises. 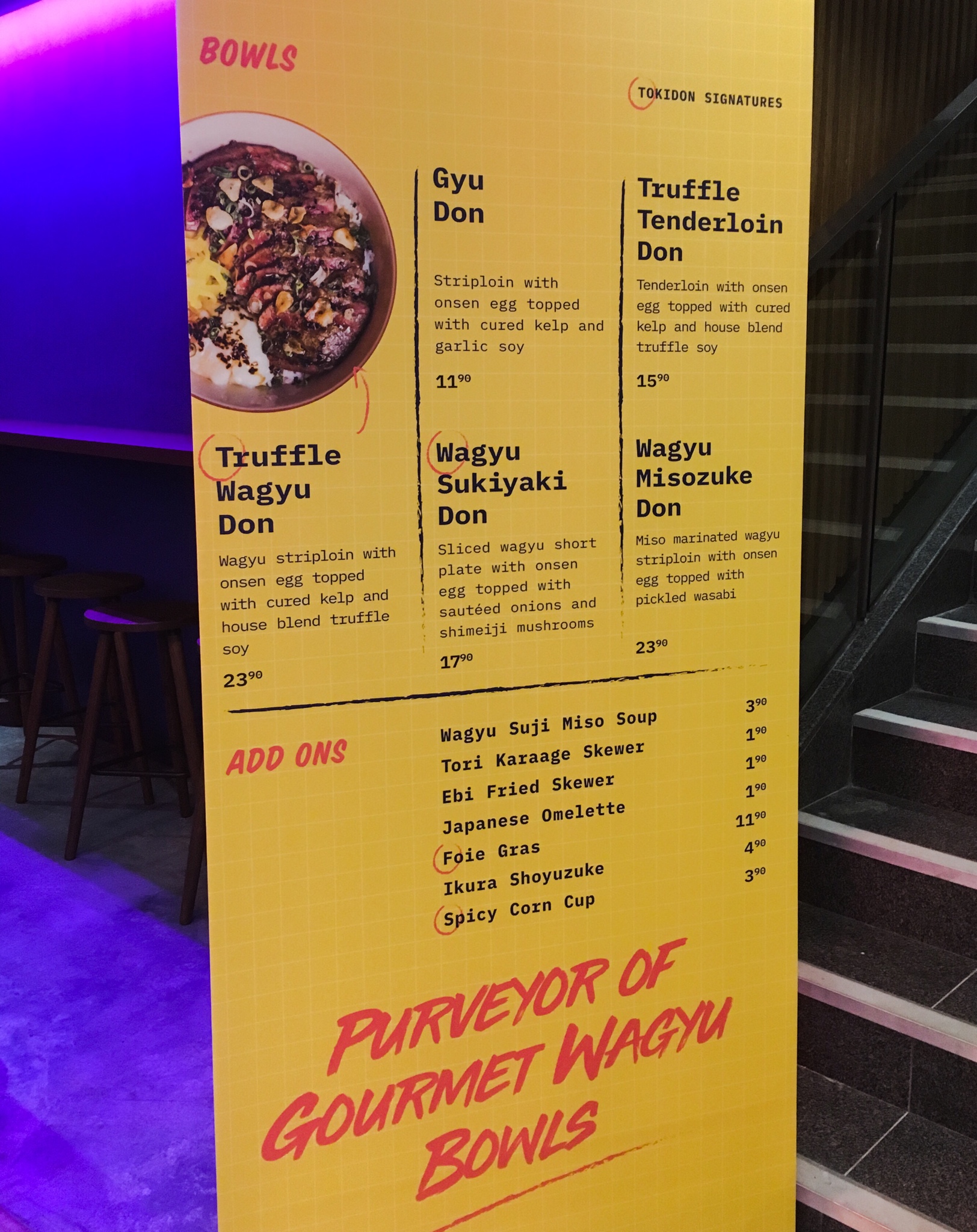 Tokidon is one of the few tenants that had moved into the building after its revamp; occupying one of the stalls nearest to the escalator into the building, it is pretty hard to miss the shop with its dim lighting and dark-coloured decor scheme with flashy red and blue neon lights. The concept is being run by the same folks behind Kabuke; a Japanese gastrobar that is known for their rice bowls during lunch hours, while serving up Yakitori and other small bites alongside a wide variety of sake at night. Tokidon’s concept would, however, focus on beef, serving up only beef-based Donburi throughout is operating hours alongside a variety of alcoholic and non-alcoholic drinks; an idea that is similar to Waa Cow! Sushi Bar though with less variety. Tokidon’s primary target audience would be the office workers in the area; though there is quite a decently-sized dine-in area within the shop, orders are typically served in paper bowls and plastic utensils to suit takeaway orders Patrons can opt to go for the set an additional cost, which sees an addon of a side of soup or Spicy Corn Cup, as well as a canned drink of the patron’s choice. 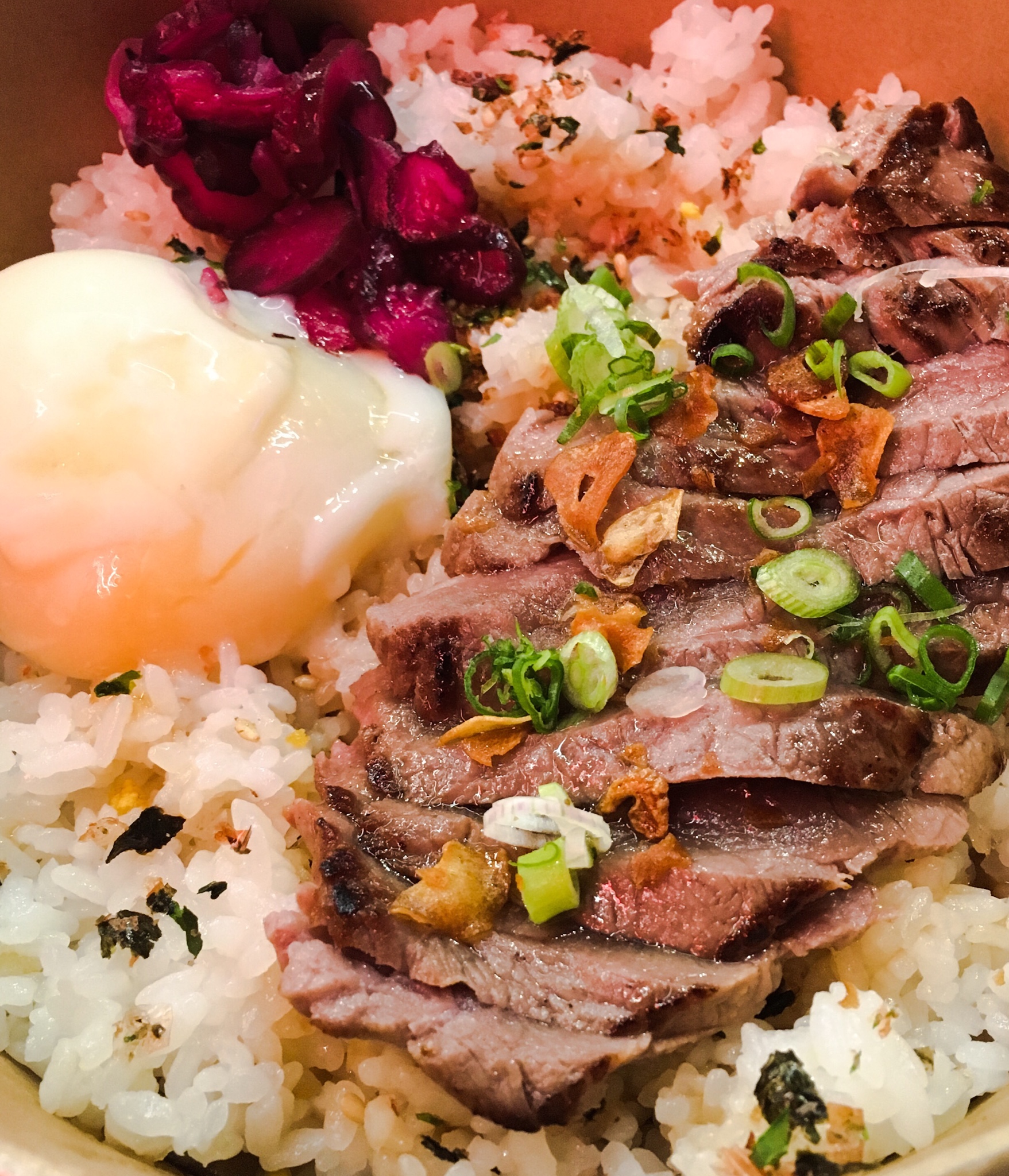 Going for the most basic bowl, the Gyu Don features striploin with onsen egg topped with cured kelp and garlic soy. It is noted that all beef is done medium-rare at Tokidon, as specified in their menu. The Gyu Don’s striploin came slightly overcooked beyond medium-rare, though still reasonably tender and does not require too much of a chew without carrying a gamey flavour. That being said, the beef does seem to taste a tad plain; thankfully, the rice was well-flavoured with the cured kelp which helped to add an alluring umami flavour to the rice to shake things up a little. All bowls also come served with sous-vide egg and Japanese pickles by default; the former being jiggly while the liquid yolk bursts eagerly upon the poke of the fork, the Japanese pickles helped to refresh the taste buds with its zingy flavours when things get a little too meaty or heavy. 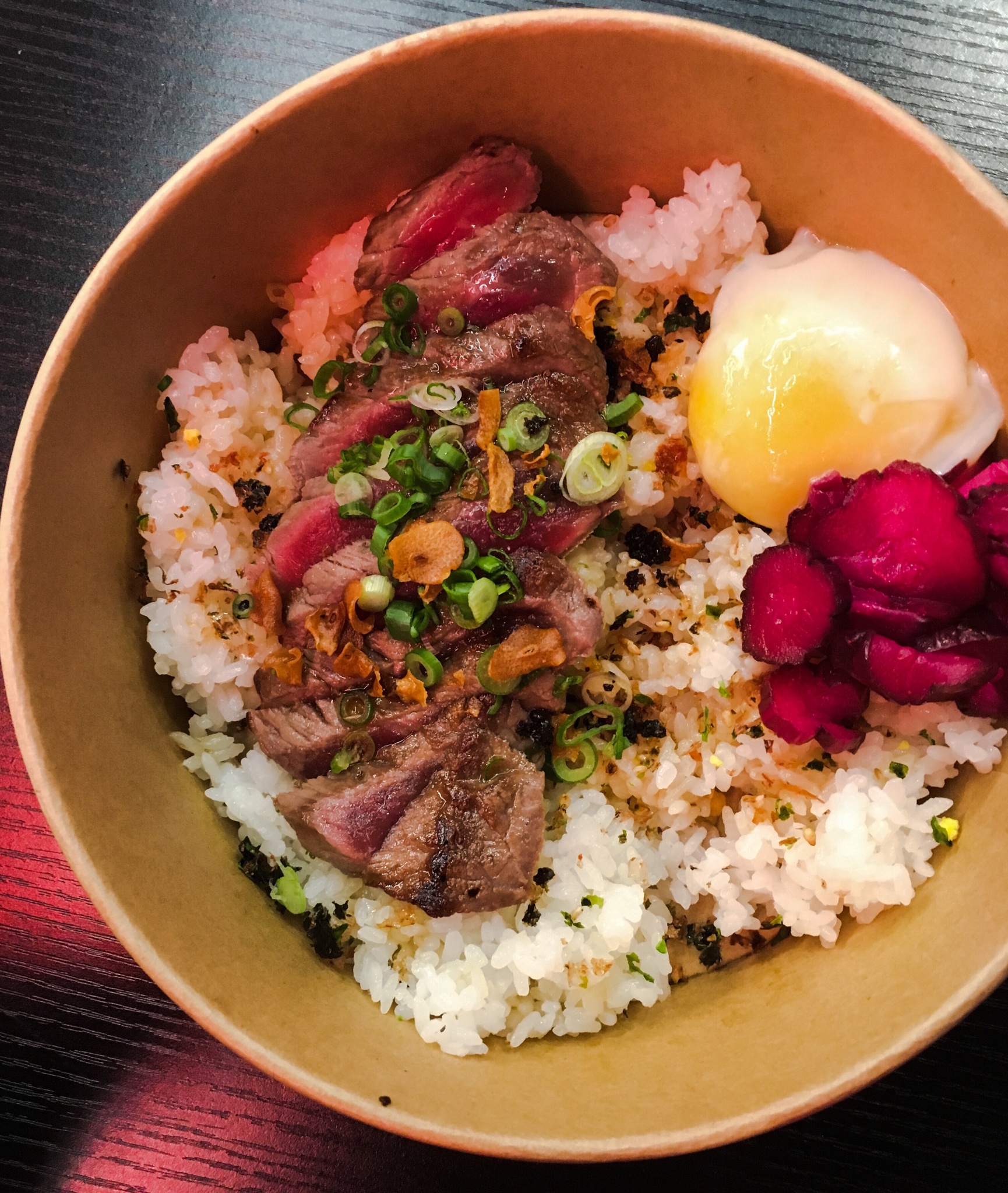 The Truffle Wagyu Don is probably an item that is meant to attract the crowds; a now-classic combination of elements, the Truffle Wagyu Don comes with Wagyu Striploin as opposed to the usual striploin used in the Gyu Don, while also coming cured kelp, onsen egg, and Japanese pickles. A slight difference with this particular bowl is that it comes with a House Blend Truffle Soy drizzled atop the rice; the Wagyu Striploin is done medium-rare with a pinkish centre; tender, juicy and does not require much effort to chew. The garlic chips helped to add a dimension of crispness to the entire bowl, while it comes with an evident whiff of truffle apart from the lingering umami-ness that perfumes the rice from the cured kelp. 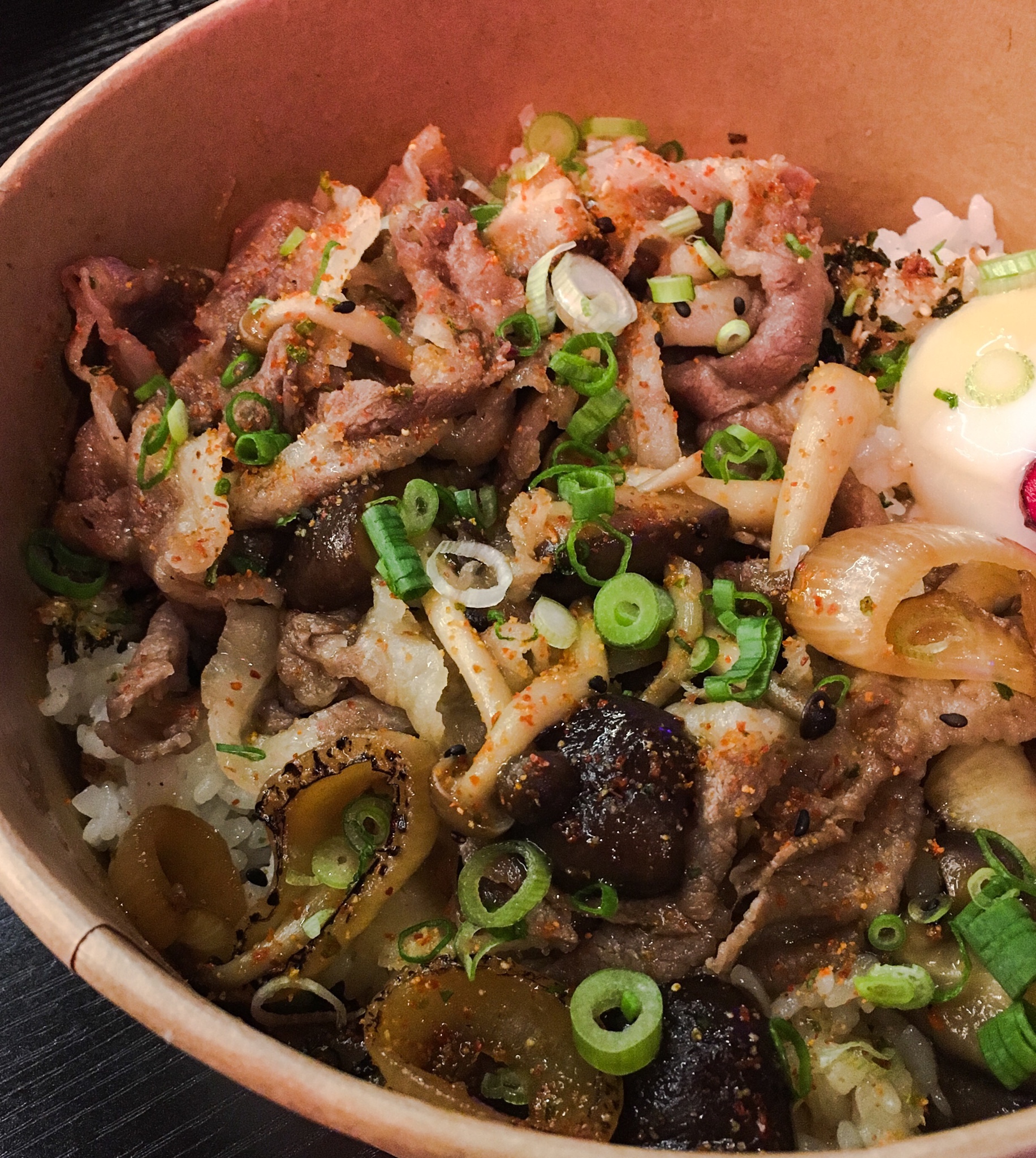 Unlike the other two bowls mentioned earlier, the Wagyu Suikiyaki Don features sliced wagyu with shimeiji mushrooms and sauteed onions alongside the same onsen egg, Japanese pickles, and Furikake added to the rice for flavour. This was our favourite bowl; one that was comforting considering the thin, sliced strips of wagyu that is tender and juicy without being particularly chewy accompanied with a slight earthiness from the shimeiji mushrooms, the caramelised onions helped add a hint of sweetness that rounds everything off perfectly. A brilliant combination in terms of flavour and texture. 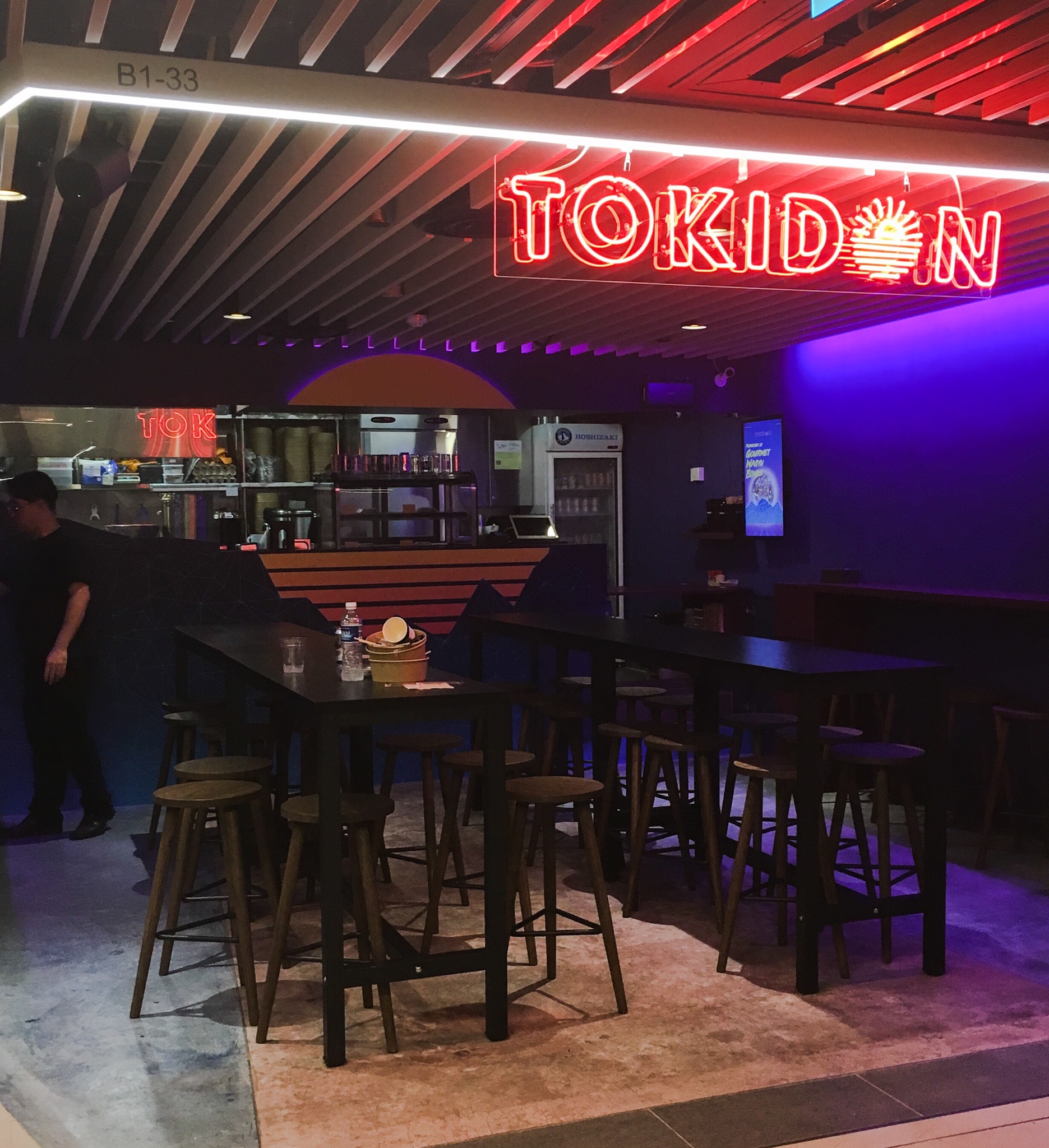 Overall, we found that Tokidon serves up decent beef-based Donburi bowls in the Central Business District. That being said, we did feel the prices felt a little steep and would probably fit well for those who are looking to splurge a little to treat themselves to something out of the usual lunch fare rather than a wallet-friendly lunch spot in the area. Perhaps we were expecting a little too much, but we also felt that the choice of using paper bowls and plastic utensils for dine-in was a slight mismatch against the prices that they were commanding for; would certainly fit better if they could look into serving up their food in proper bowls and cutlery for dine-in patrons to improve on the presentation of the dishes at the price point. That being said, Tokidon would be a place that adds on to the countless options that folks around the Central Business District can consider to dine at; it would be interesting to see if Tokidon would be the spot that office folks would be flocking to for that pay-day treat and/or Beef Donburi fix.