(En Sushi had since moved to Midland House at Middle Road; updated address at the end of the post.)

Yet another F&B concept had jumped on the bandwagon for Japanese eateries serving affordable Bara Chirashi Don — this time, again, in the Bencoolen/Bras Basah neighbourhood. 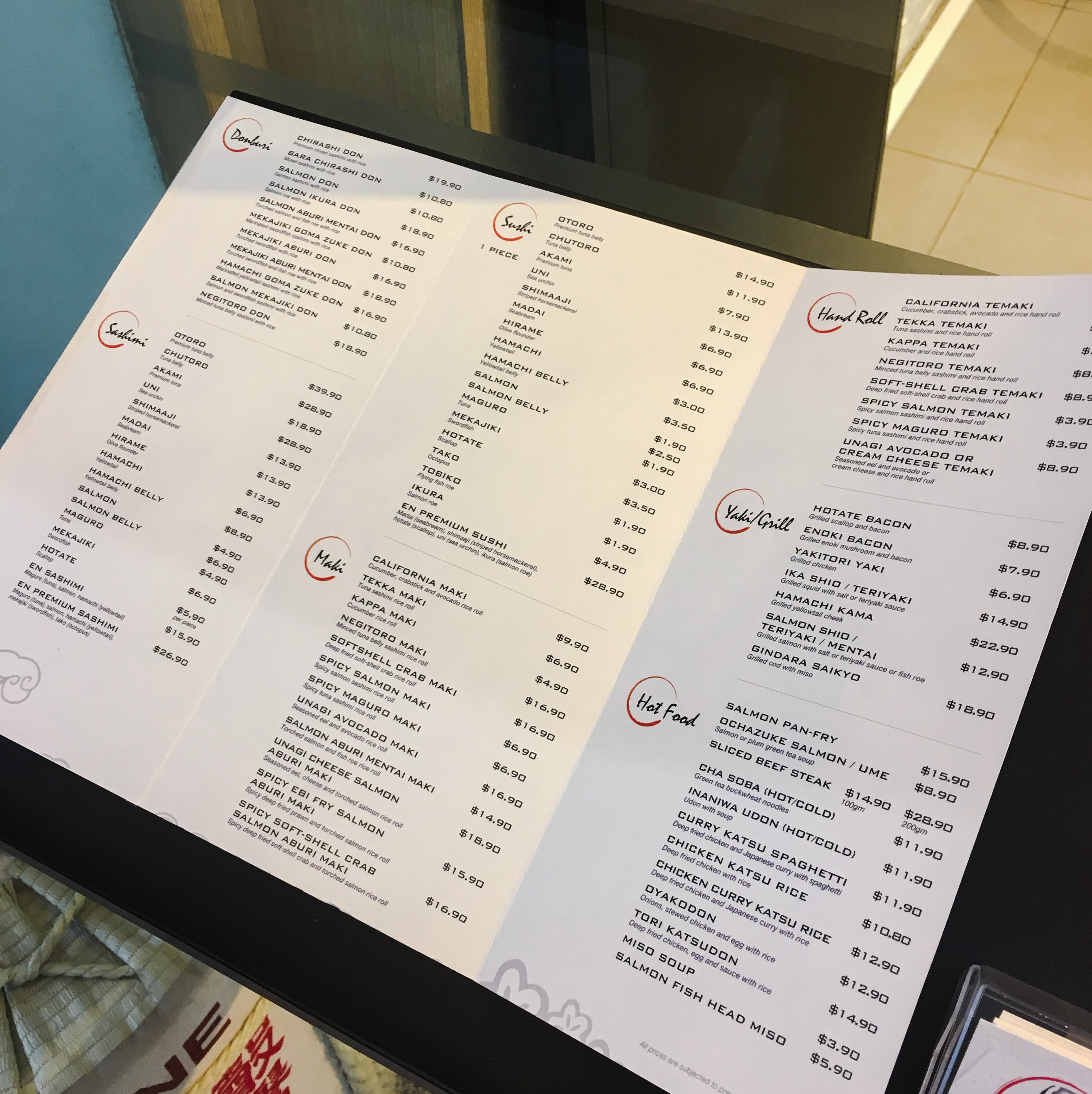 Situated just in between ERC Institute and Rendezvous Hotel opposite School Of The Arts (SOTA), En Sushi takes over the spot formerly occupied by Captain K Seafood Tower. The spot is well-decorated with functional furnishings while the walls are adorned with wallpapers that carries a modern, Japanese vibe; while most of the dining area features dining tables, a sushi counter is situated at the end of the shop space where counter seating is also available. En Sushi features a wide variety of Japanese cuisine; the menu features Donburi, Sashimi, Sushi, Maki, Hand Rolls, Yaki (Grill), Hot Food and Appetisers — one of the key highlights here would be their Bara Chrashi Don that comes at an affordable $10.80++, being one of the cheapest, if not the cheapest Bara Chirashi Don currently in town. 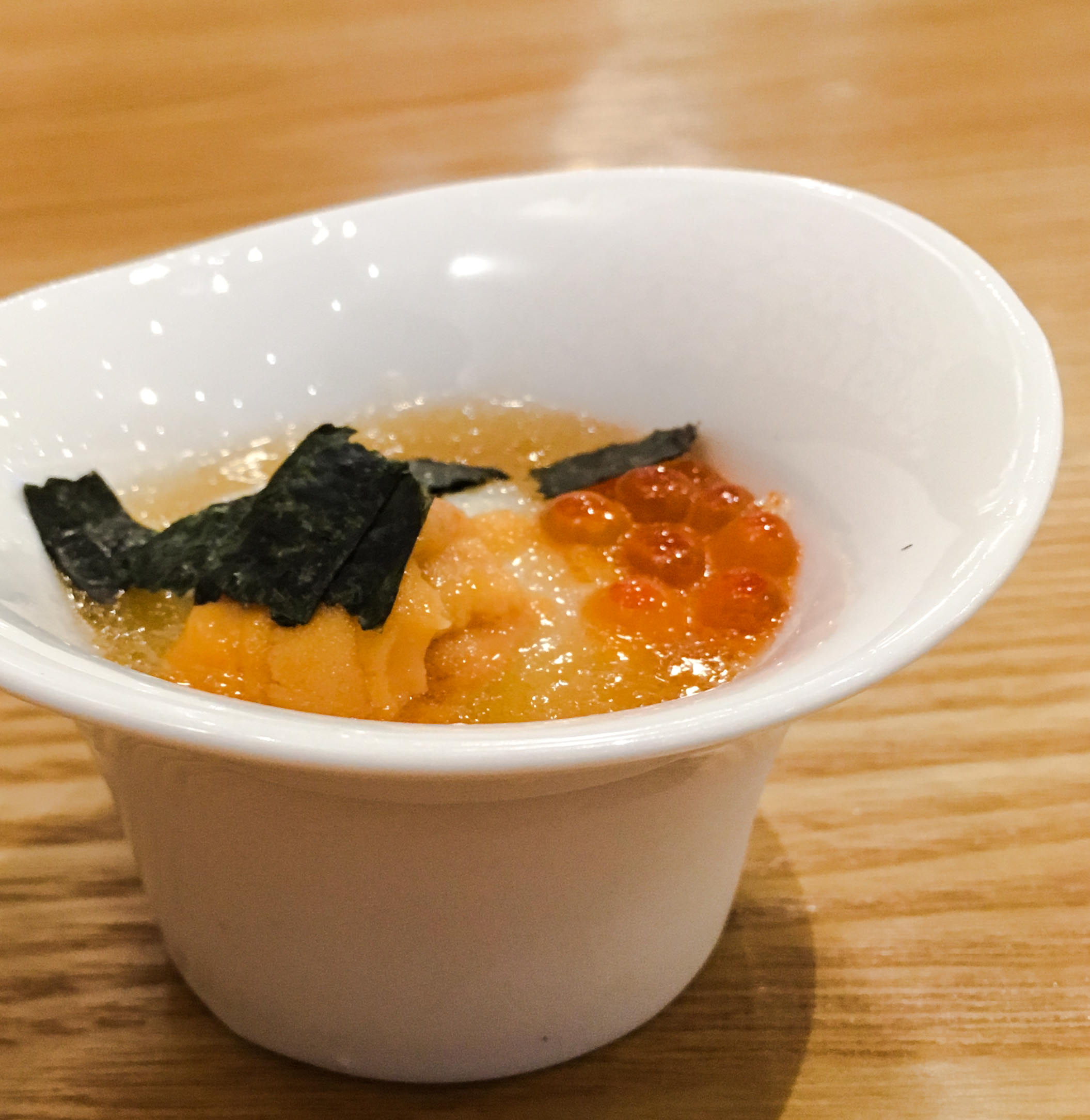 Going for one of the appetisers to share, the Uni Ikura Onsen Tamago was one of the items that caught our attention — after all, a dish coming with Uni at a price of $10.90++ is a rare find. The item is served cold; the Uni being fresh without any unpleasant odour while the flowy onsen egg is complimented with a soft hint of light soya sauce for a savoury flavour. Ikura helps to enhance the overall flavours further by adding a contrast with its umami-ness and popping sensation. 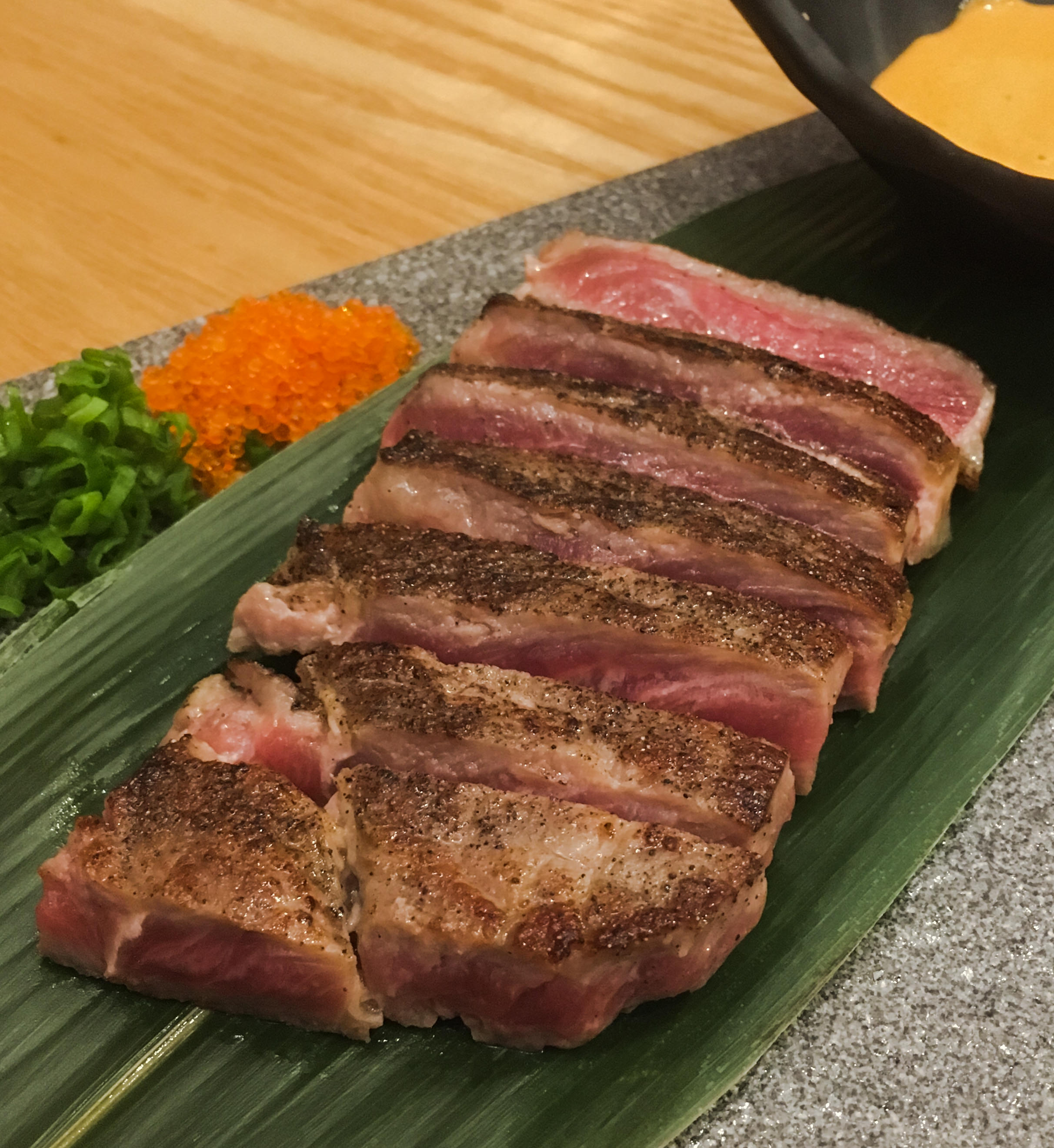 We also shared the Sliced Beef Steak — it comes in both 100gm and 200gm portions; we picked the former. The beef is seared with a pinkish centre; tender without needing much effort to chew whilst considerably flavourful. It comes with a spicy sauce; not quite a mayonnaise but it’s tangy and moderately spicy; in fact, a delicious sauce that would certainly work well with some other dishes that they have to offer as well. 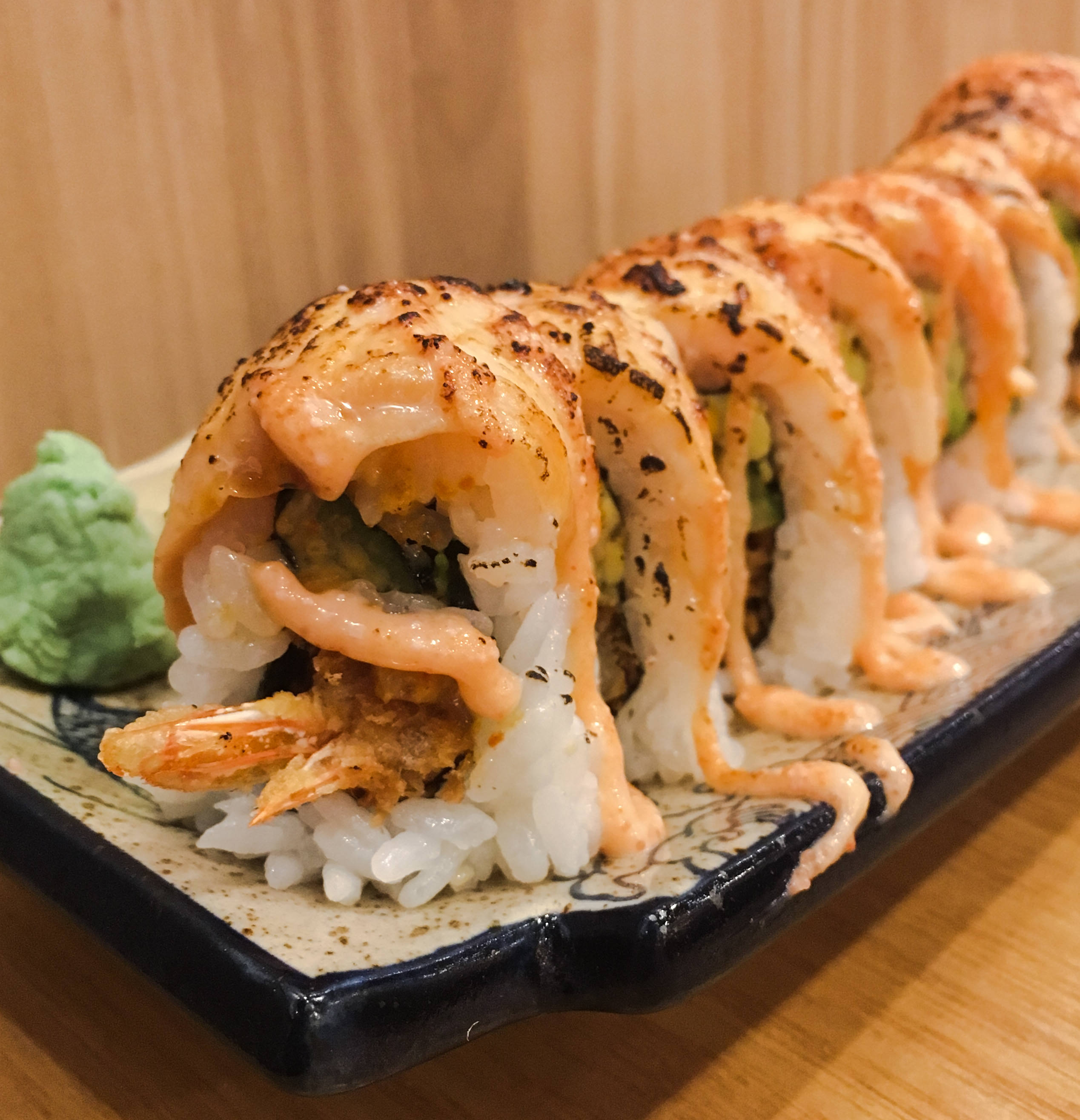 Since En Sushi has its focus on sushi, we ordered the Spicy Ebi Fry Salmon Aburi Maki — the Maki comes with deep-fried prawn and torched salmon drizzled with Mentaiko mayo. The Maki was decent; the Ebi Fry helps to add a crisp texture to the Maki, while the rice is generally well-packed. Aburi salmon carried a balance of texture and flavour; carried a hint of smokiness, yet melt-in-the-mouth. We thought the item could have fared better with a slightly more generous drizzle of Mentaiko sauce; the sauce itself being umami when had on its own but did not exactly come through when had with the Maki altogether. That being said, the Mentaiko mayo can be seen as a bonus element here, however, considering there was no mention of it in the item’s description nor in its name. We also note that one of the ends of the Maki carried a distinct hint of pepper that we were not a big fan of, though that was largely not a big issue considering how the Maki was otherwise fine throughout. 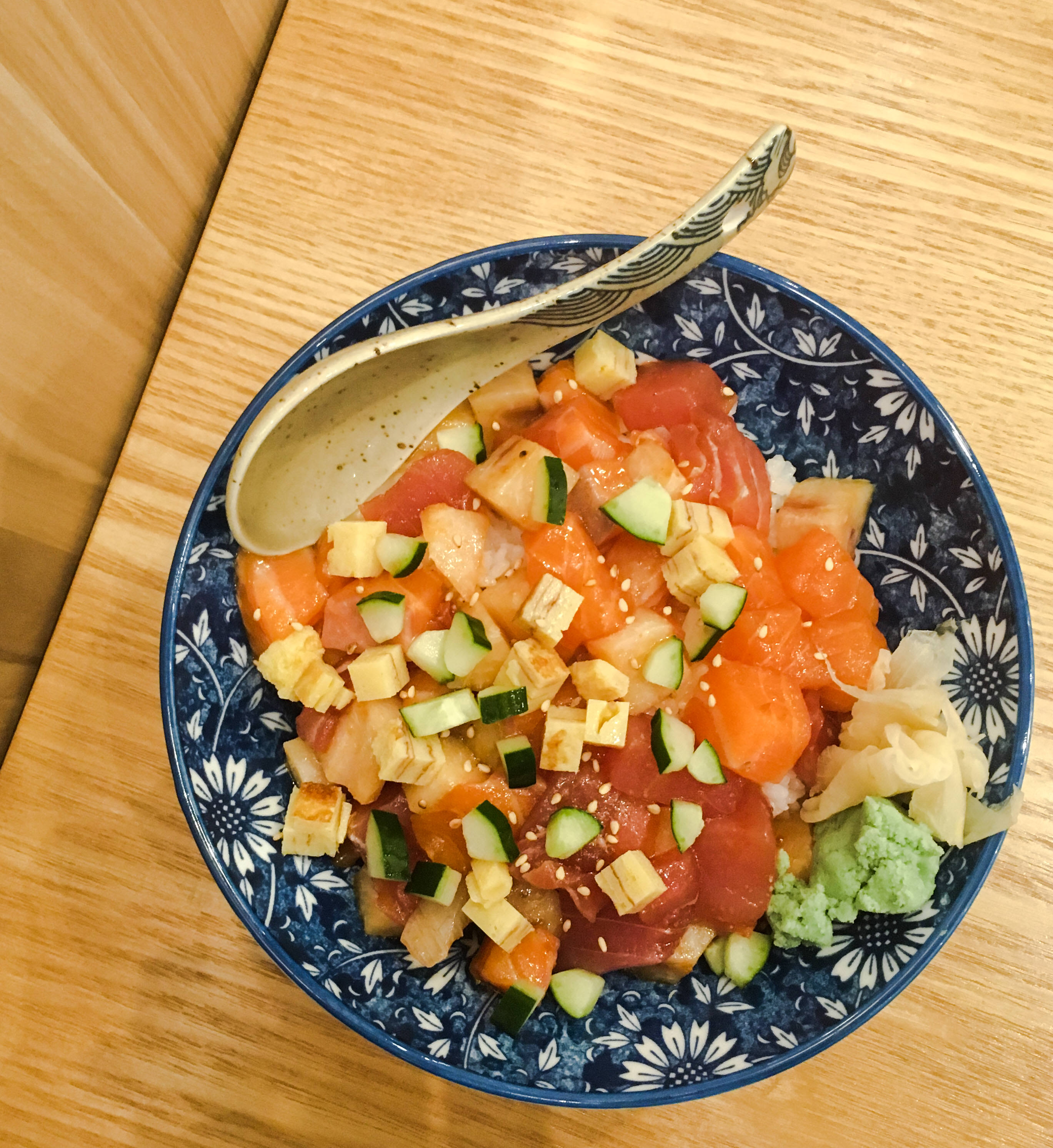 Affordable Bara Chirashi Dons are something that makes us pretty excited; this meant that we would not give the Bara Chirashi Don at En Sushi a miss considering its very affordable price tag of $10.80++. It comes with a good portion of raw fish cubes such as Tuna, Swordfish and Salmon, along with other elements such as diced cucumbers and Tamago. The raw fish cubes comes lightly marinated with a slightly sweet and savoury sauce; one that helps to enhance the flavours of the raw fish cubes but still leaves the freshness of the fish pretty much as-is. The cucumbers help to add a crunch, while the cubes of Tamago helps to add a hint of sweetness to the entire bowl. Unlike most other places, the sushi rice is served without any sauce and at room temperature — the rice matched up the flavours of the fish perfectly; pearly, and carries its own hint of sweetness that goes so well with the fish despite the lack of sauce. One of the affordably priced Bara Chirashi Dons out there that is well put together and of a respectable quality at its price. 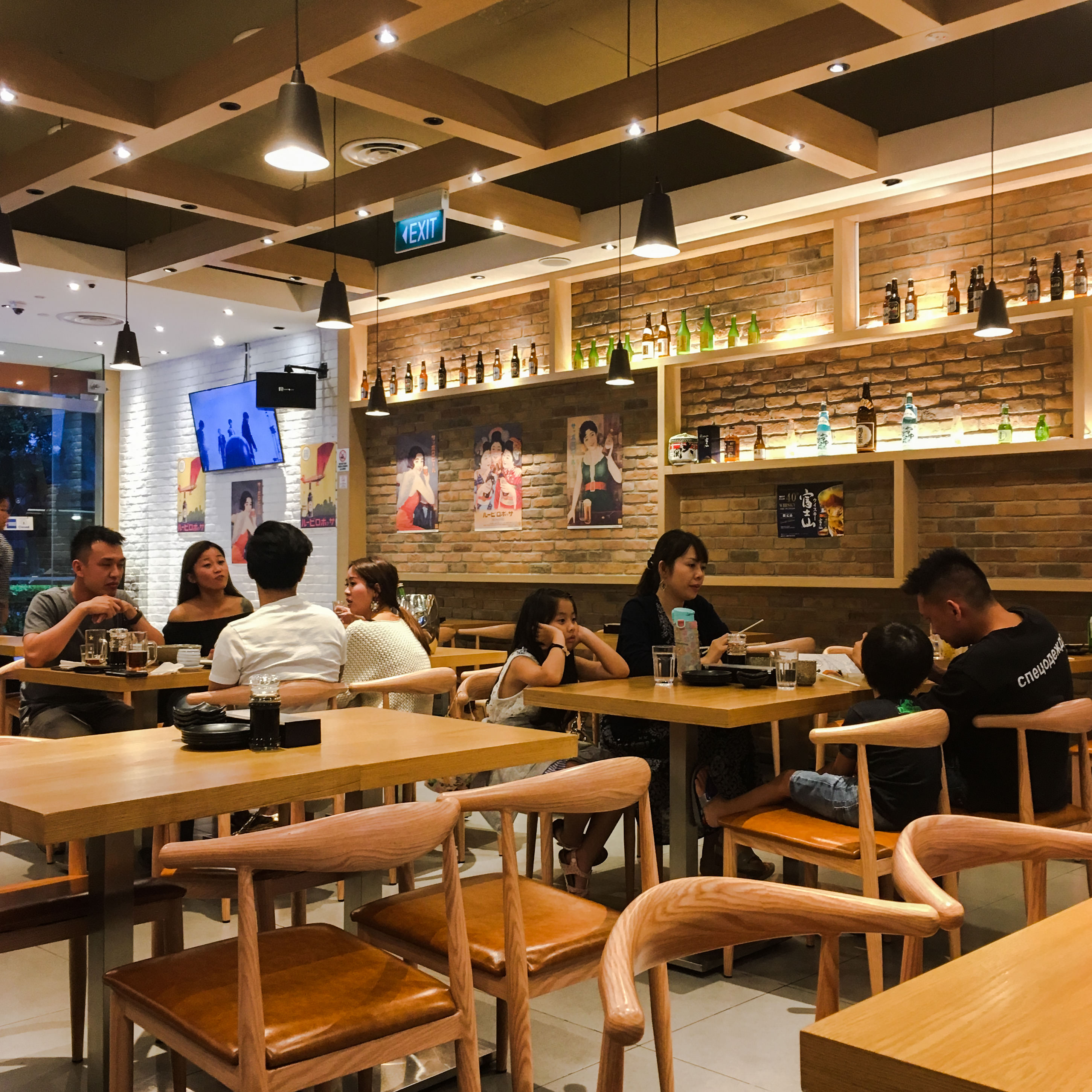 While District Sushi has been the de-facto spot for value-for-money Bara Chirashi Dons in the neighbourhood, En Sushi is a place that would probably give District Sushi a good run for its money considering the quality and the lower price tag that its Bara Chirashi Don commands for. The other items that we tried at En Sushi were also pretty decent; generally left a nice impression for the price. Given how locals always seem to be in for a good Bara Chirashi deal with queues often forming around Teppei Syukudo/Daidokoro, Hana Hana, Sushiro and District Sushi, En Sushi would be a place for Bara Chirashi Don lovers to visit, especially for those who prefer places that puts an emphasis on the freshness of the fish over the marinade; a place to keep a lookout for.