Purvis Street had always been a street known for its eclectic mix of F&B establishments, with the likes of Clinton Street Baking Company and Salted & Hung being located in the same street as humble local establishments such as Yet Con being situated there for the longest time, serving up Hainanese Chicken Rice. 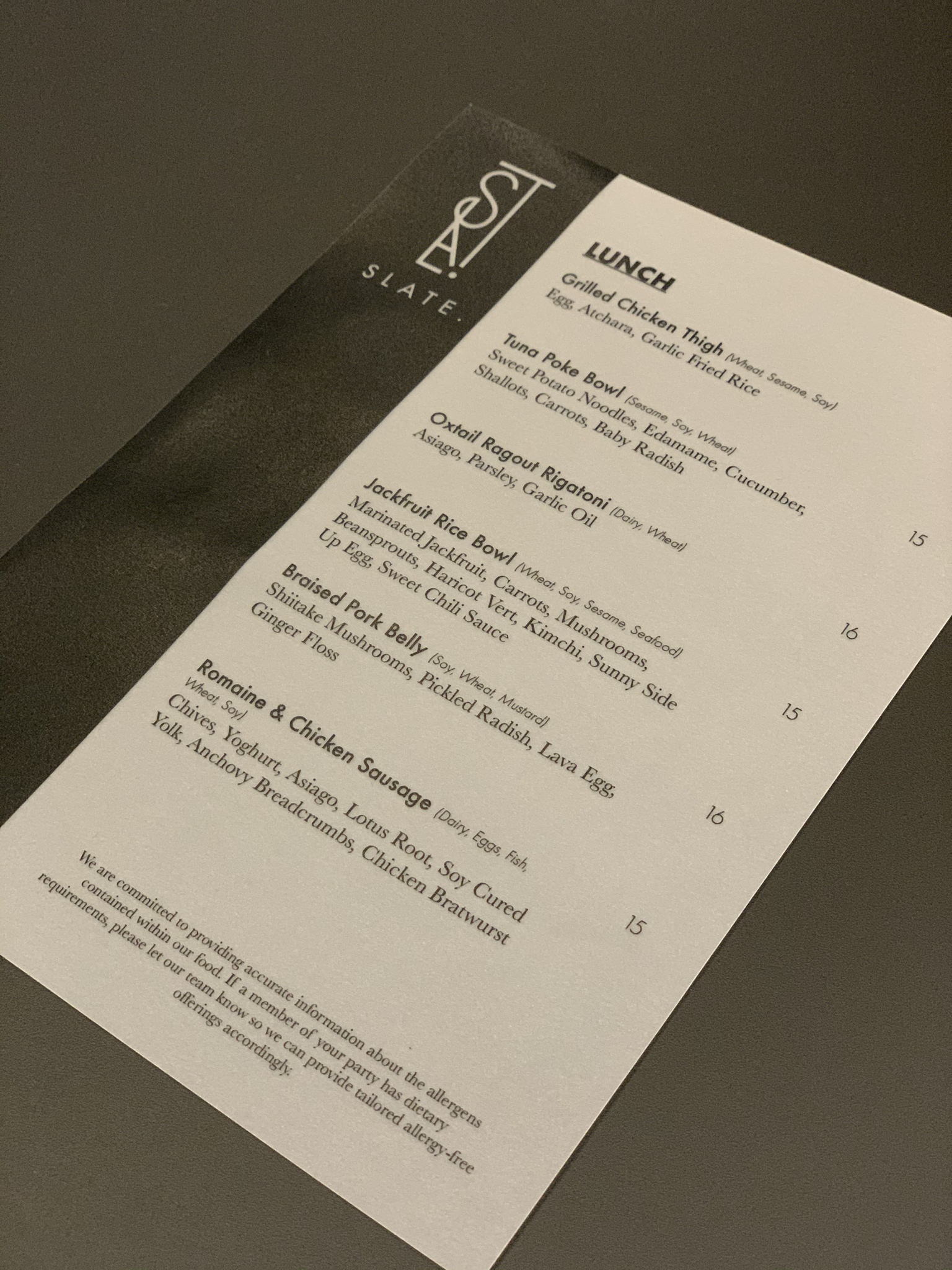 Slate is the latest addition to the Purvis Street neighbourhood, which is situated in between City Hall MRT Station and Bugis MRT Station, and a stone’s throw away from Esplanade MRT Station as well. Bringing a Aussie-style cafe concept in the day and a Contemporary tapas-style restaurant and bar in the evening, Slate is decked in a style of a casual bistro; filled with booth seats on one side of the shop space and dining tables and chairs on the other towards the back of the unit, the bar counter takes up a section in the middle, while dining tables and chairs take up the front of the space — the space is decked in a pretty modern aesthetic, though nothing minimalistic with its heavy use of wooden elements and blue furnishing and decor that compliments the black furnishings and fittings of the shop. The result is a look that is easy to the eyes and not pretentious; rather contemporary even. Serving up a different menu for brunch and dinner, we were served the brunch menu considering our visit was made during weekend brunch service — apart from the items listed on the menu, Slate does carry a few specials which are normally communicated through their wait staff to the patrons while they serve the menu to the table. Being a restaurant and bar concept, the beverages menu seems to be feature quite an extensive list of alcoholic beverages from cocktails to gins, wines, and spirits, while non-alcoholic options include specialty coffee and tea. 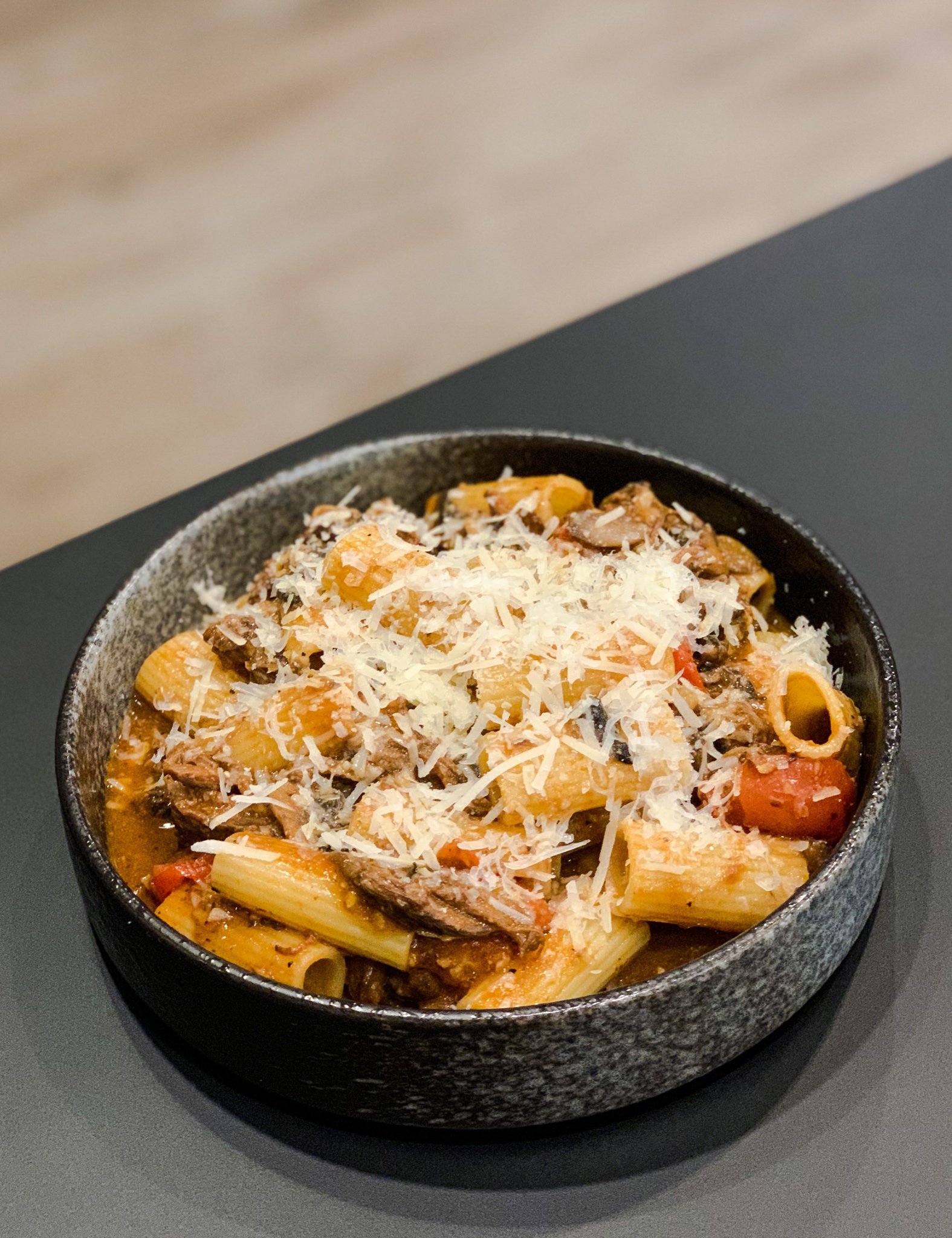 Skimming through the menu on the items that they serve for brunch service, we found ourselves going for the Oxtail Ragout Rigatoni. Featuring elements such as Asiago, Parsley, and Garlic Oil, the Oxtail Ragout Rigatoni is a pretty decent pasta dish overall. Tossed in an Oxtail Ragout, the Rigatoni was al-dente, carrying a good bite whilst the Oxtail Ragout clings onto the grooves of the pasta, carrying a savoury hint of flavours that hints of a medley of meaty, tomato and herb-y notes that is pretty flavourful on its own. The chunks of shredded Oxtail helps to enhance those flavours further, providing a fibrous texture and a meaty flavour, while the shaved Asiago cheese helps to add yet another dimension of savouriness for the dish. We liked how the item also came with cherry tomatoes; the tomatoes being juicy and burst of refreshing zestiness. A pretty decent pasta item overall. 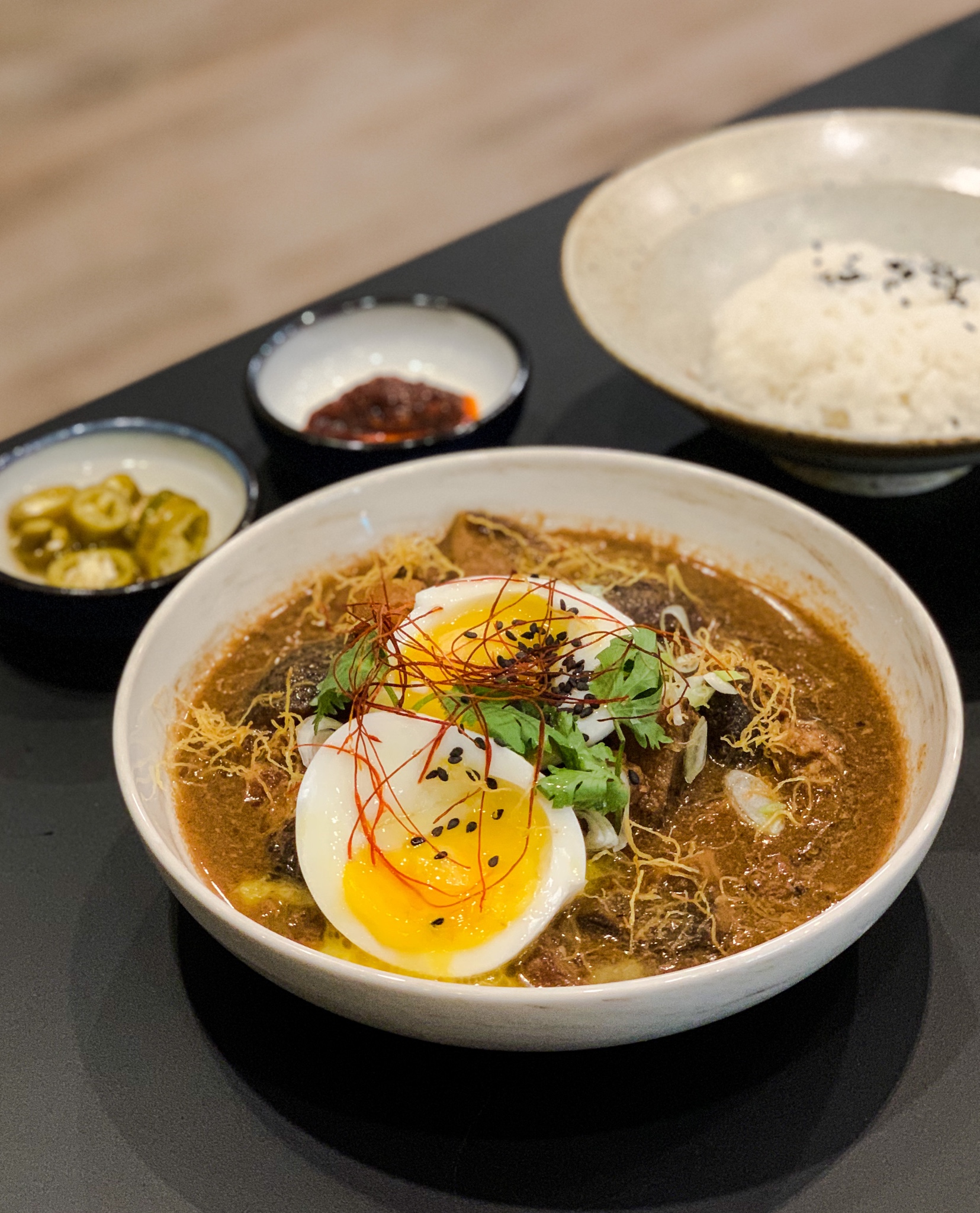 We also went for the Braised Pork Belly. One of the items that seem to carry more Asian influence than the Aussie-style concept that Slate seems to describe of itself, the Braised Pork Belly features elements such as Shiitake Mushroom, Pickled Radish, Lava Egg and Ginger Floss, served with a portion of rice on the side as well as sambal and green chilli. Just going by how the Braised Pork Belly looks here, one could tell that the Braised Pork Belly here comes more similar to that of a stewed dish rather than that of a typical Chinese braised item; the braising liquid is significantly lighter in both its appearance and its flavour, as compared to the thick, dark and rich braised sauce that is often associated with braised delights that other Chinese establishments would usually serve up. We note that the chunks of pork belly were pretty juicy, succulent and melt-in-the-mouth; however, the dish seem to place a heavier emphasis on the Shiitake Mushrooms. While we are not complaining of the addition of Shiitake Mushrooms in the dish, we felt that the ratio of Shiitake Mushrooms to chunks of Pork Belly was a little off-balance, considering the generous portion of Shiitake Mushrooms served. That being said, we did enjoy how the mushroom provides a good contrast of both flavours and texture to the dish, providing a bouncier bite and an earthy flavour profile that cuts through the meatiness of the dish. We also liked how the Braised Pork Belly seems to come with a pretty controlled portion of rice; just enough rice to go around the Braised Pork Belly, without being particularly carb-heavy or overwhelming. The lava egg is undeniably the crowd-pleaser of the entire dish, revealing its still molten yolk in its full glory. A familiar dish coming with their very own touch, the rendition of the Braised Pork Belly here is pretty unique; one that comes slightly less jelak or saltish as the typical Chinese rendition, though still pretty palatable in its own right. 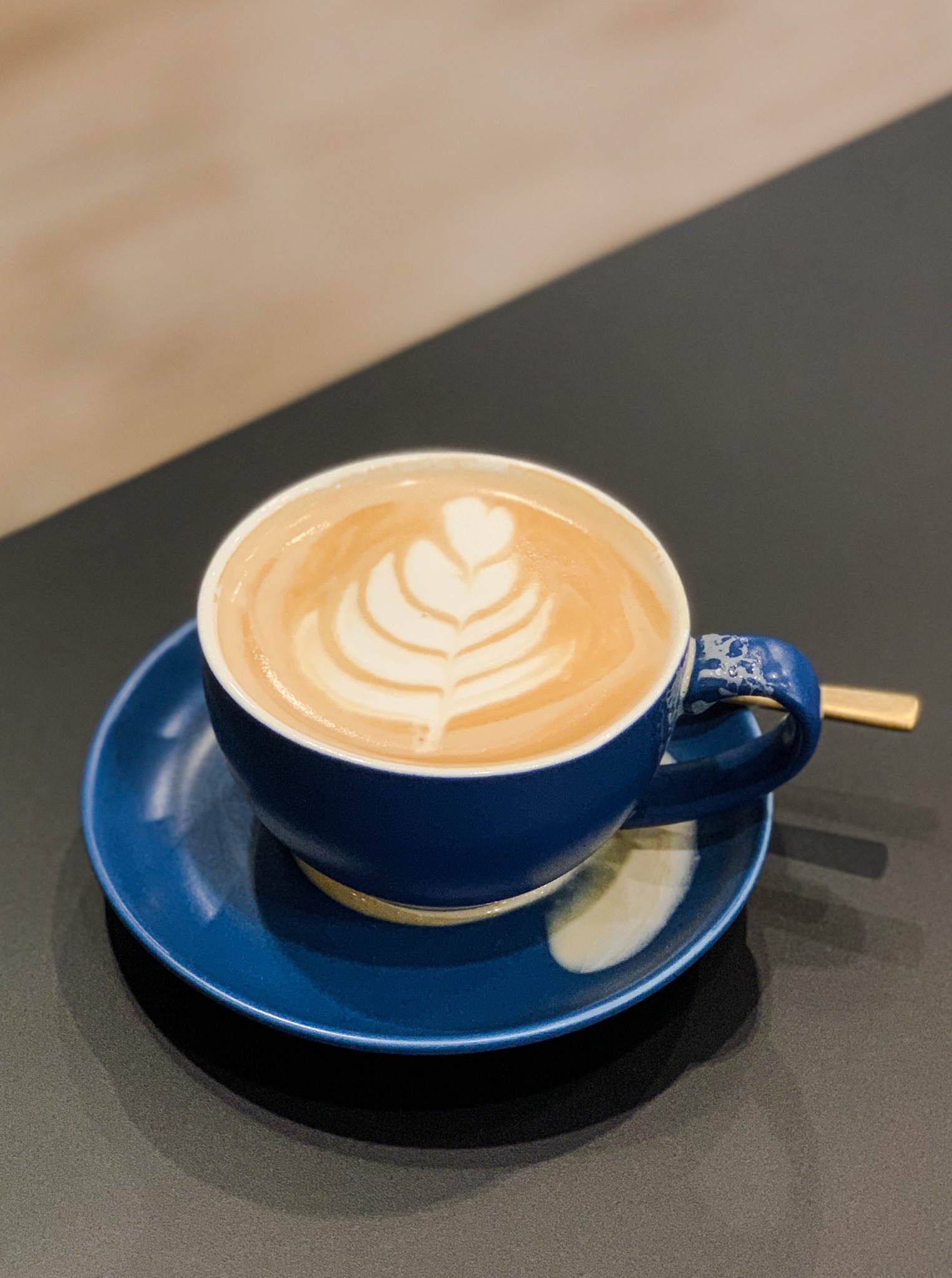 Going for the usual cuppa here, we found ourselves ordering the Flat White here. The Flat White is pretty decent; a cuppa that features a medium body and a nutty flavour profile, it is considerably well-pulled considering how Slate seems to be more of a bistro/gastro-bar conceptually. A cuppa that would work well for the mid-day perk-me-up that is not too heavy to shock the senses. 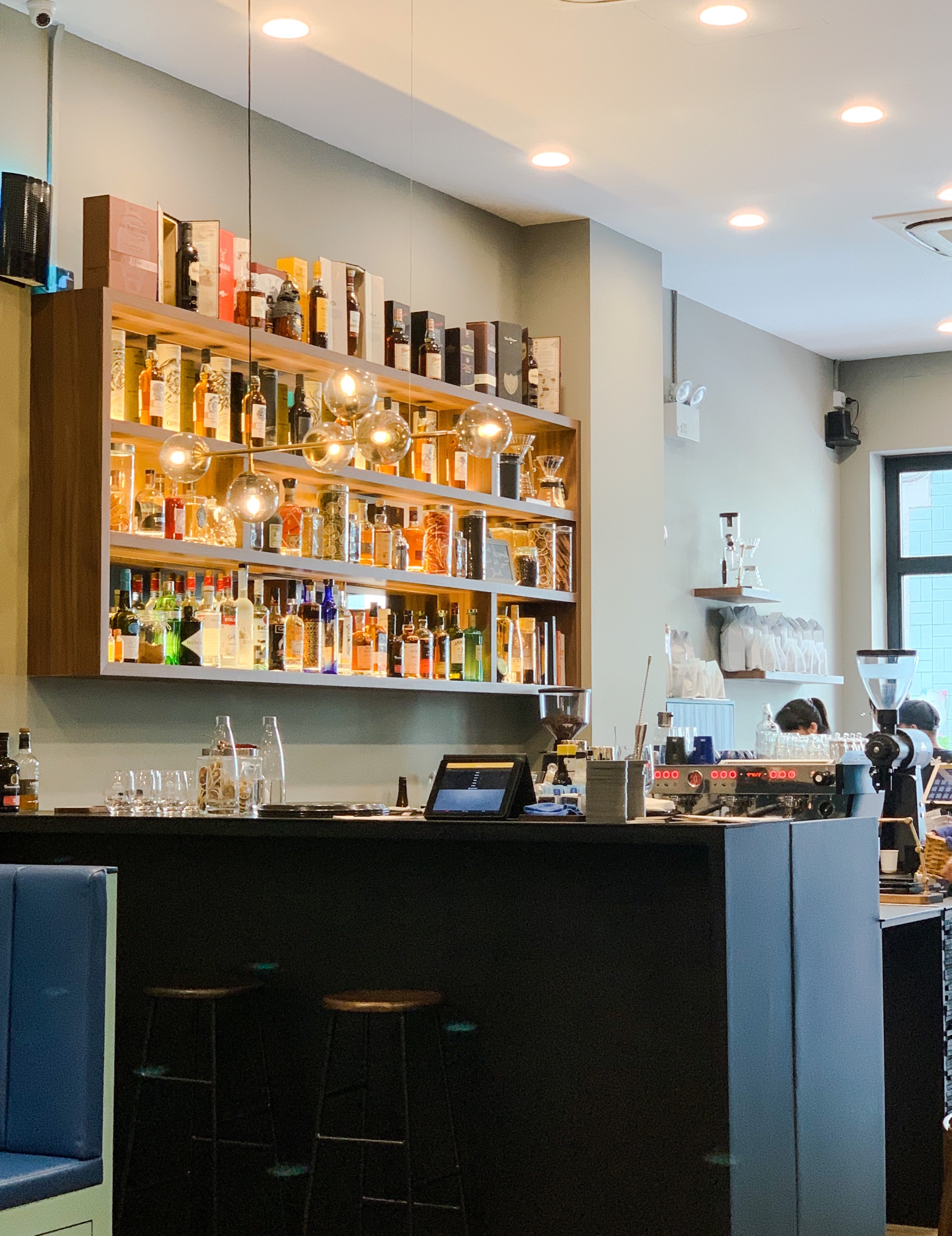 Given how Slate is described to be an Aussie-style cafe concept in the day and a Contemporary tapas-style restaurant and bar in the evening, we felt that the menu served for its brunch service seems to be very loosely connected towards the theme that they are trying to bring across. Perhaps we were trying the items that are much on the safer side, considering how they do offer other more adventurous items such as the Jackfruit Rice Bowl and Romaine & Chicken Sausage. That being said, we felt that the brunch plates do carry a more progressive and contemporary feel to them; this is especially so for the Braised Pork Belly which seems to carry a heavier Asian influence as compared to the other items on the menu, though one would probably associate Aussie-style with more comforting, brunch-style items with the use of eggs or dishes such as pancakes. That being said, it is interesting to see how Slate does shape their own character and style from the food that they serve; no doubt having their own style, though could do with some minor tweaks to make it even better. Given the competitive nature of the F&B establishments at this part of City Hall/Bras Basah/Bugis, it would be interesting to see how Slate will be like in the future; a place that one could consider dining at if in the area.