While the opening of cafes had been slowing down quite a fair bit recently, Bacha Coffee is a new name that aims to bring yet another unique experience into the local cafe scene. 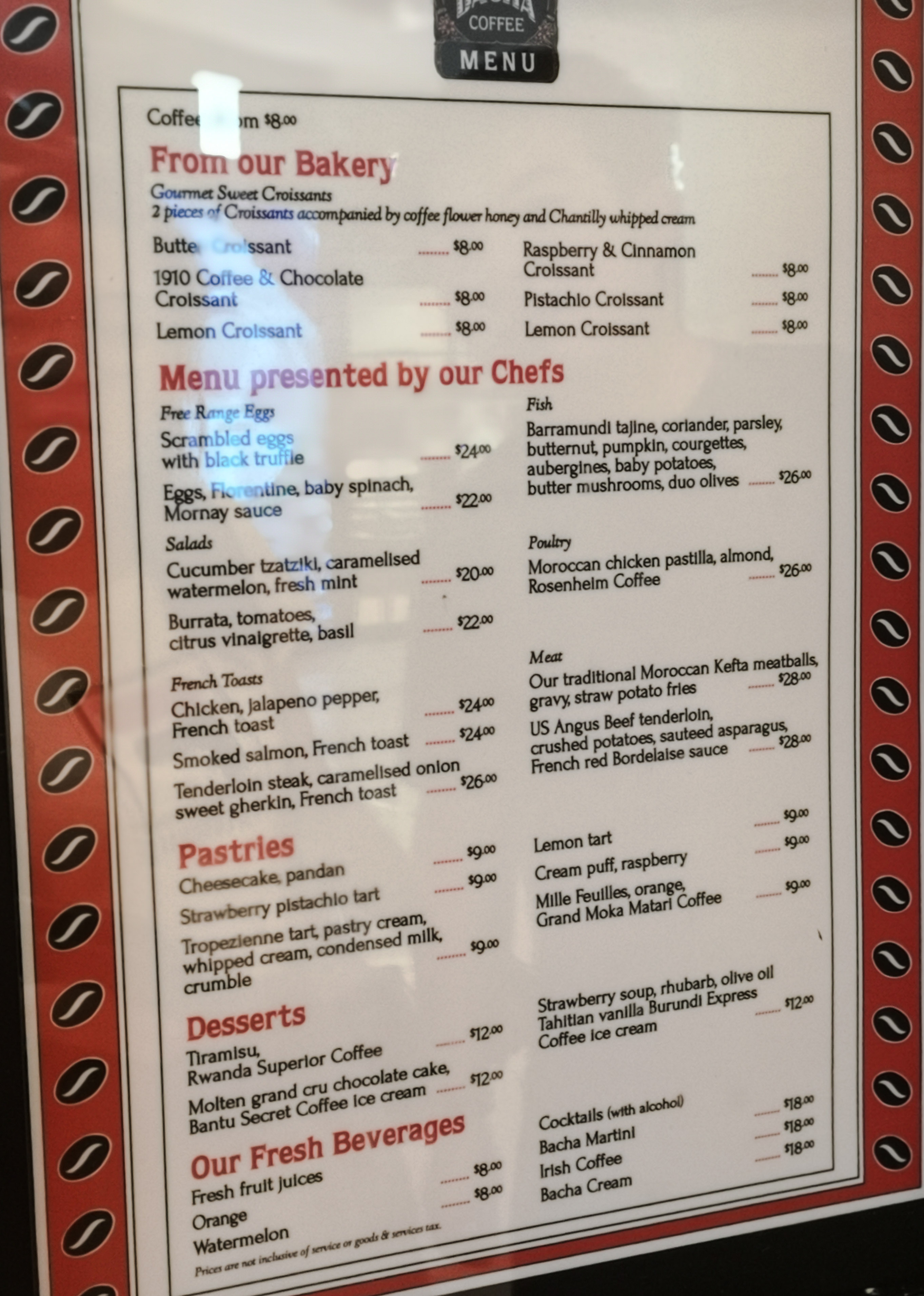 Originating from Morocco, Bacha Coffee had recently opened its very first coffee room in Singapore. Taking up a space that had been left vacant for quite a while at ION Orchard at Level 1 just across Nespresso, the outlet is inspired by the Dar El Bacha palace in Marrakech. Adopting a bright color scheme with a large use of orange elements as well as grand-looking ornaments such as chandeliers with reflective elements, plush furniture and a rather grand, yet classic look, the interior design is almost TWG Tea-esque with a Moroccan theme. Splitting the shop into two different areas, patrons will first walk into the retail space where one could pick up pastries or coffee beans packaged for retail from before stepping into the cafe area. Serving up a small variety of food, the food menu here consists of all-day breakfast items, salads, and main courses. Also available on the menu would be a small selection of pastries, desserts, and viennoiserie. Considering how much of the focus at Bacha Coffee revolves around coffee, Bacha Coffee serves up a quite an extensive selection of coffee from all around the world — the menu is largely divided into a few sections; one being dedicated to single-origin brews, while others include blends that are deemed to fit different times of the day to one that carries various types of flavored coffee — all brewed without the use of milk or syrup. Other beverages available at Bacha Coffee include fresh juices, cocktails, and mocktails, though the latter two may still carry coffee infusions in them. 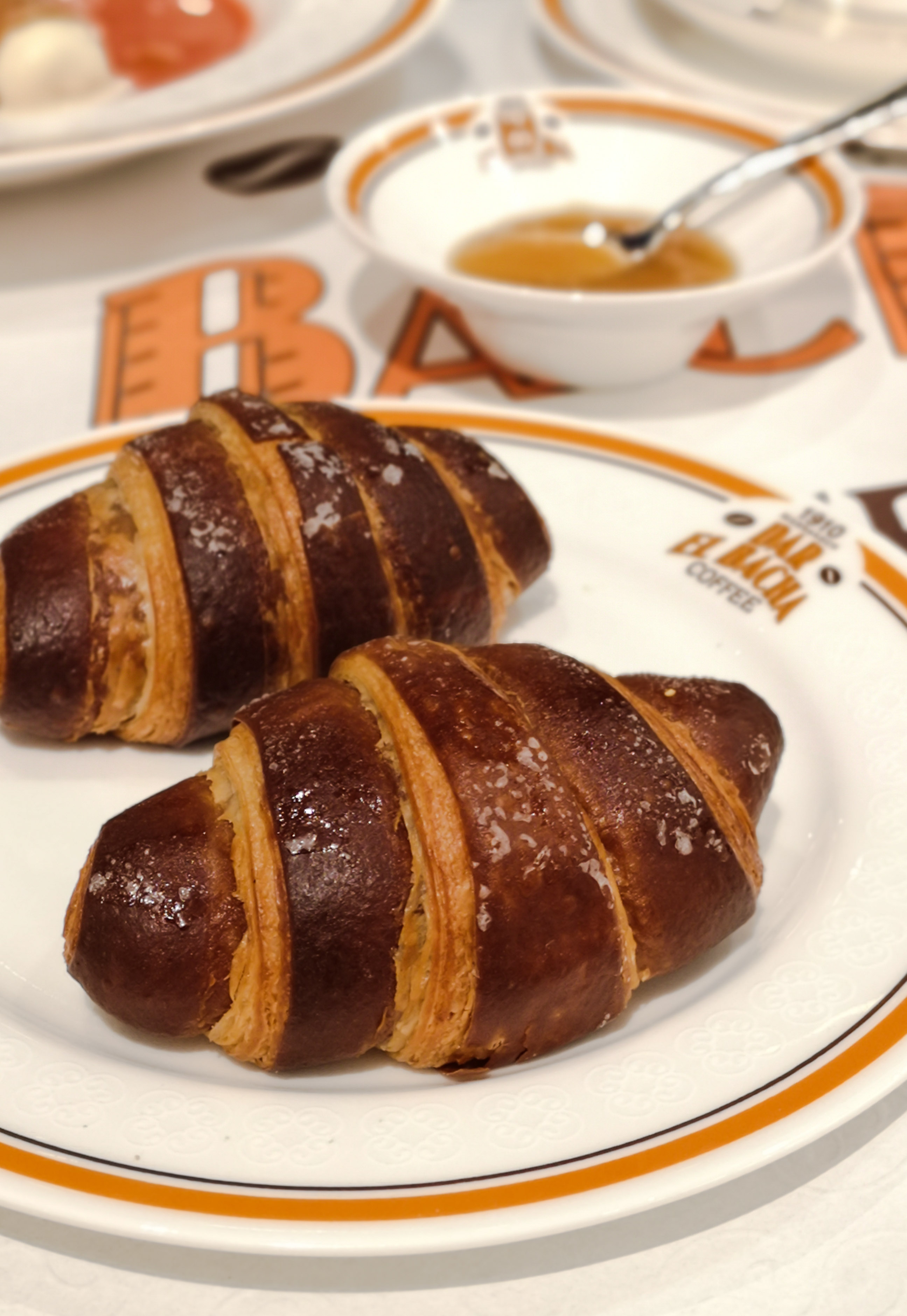 Tempted to grab a croissant, we went for the 1910 Coffee & Chocolate Croissant which was off the “Gourmet Sweet Croissants” section of the menu. Coming in a serving of two, the croissants also came with coffee flower honey on the side to be had with the croissants. Sinking our teeth into the croissant, one could easily notice how the croissants were flaky and buttery; sprinkled with a dash of sea salt over the top, the saltiness helps to further enhance the butteriness of the croissant. Infusing coffee into the dough of the croissant, the croissant carries a light hint of earthiness and roastiness, while a knob of chocolate is included within the provide for a hint of sweetness. Whilst adding the coffee flower honey seemed a tad unnecessary considering how the 1910 Coffee & Chocolate Croissant is already sweetened, the raw honey adds a sticky, gritty texture that came with a rice floral sweetness which was pretty alluring to have even on its own. Something which would certainly fit a taitai‘s high tea session over a pot of coffee on a leisurely afternoon in between shopping. 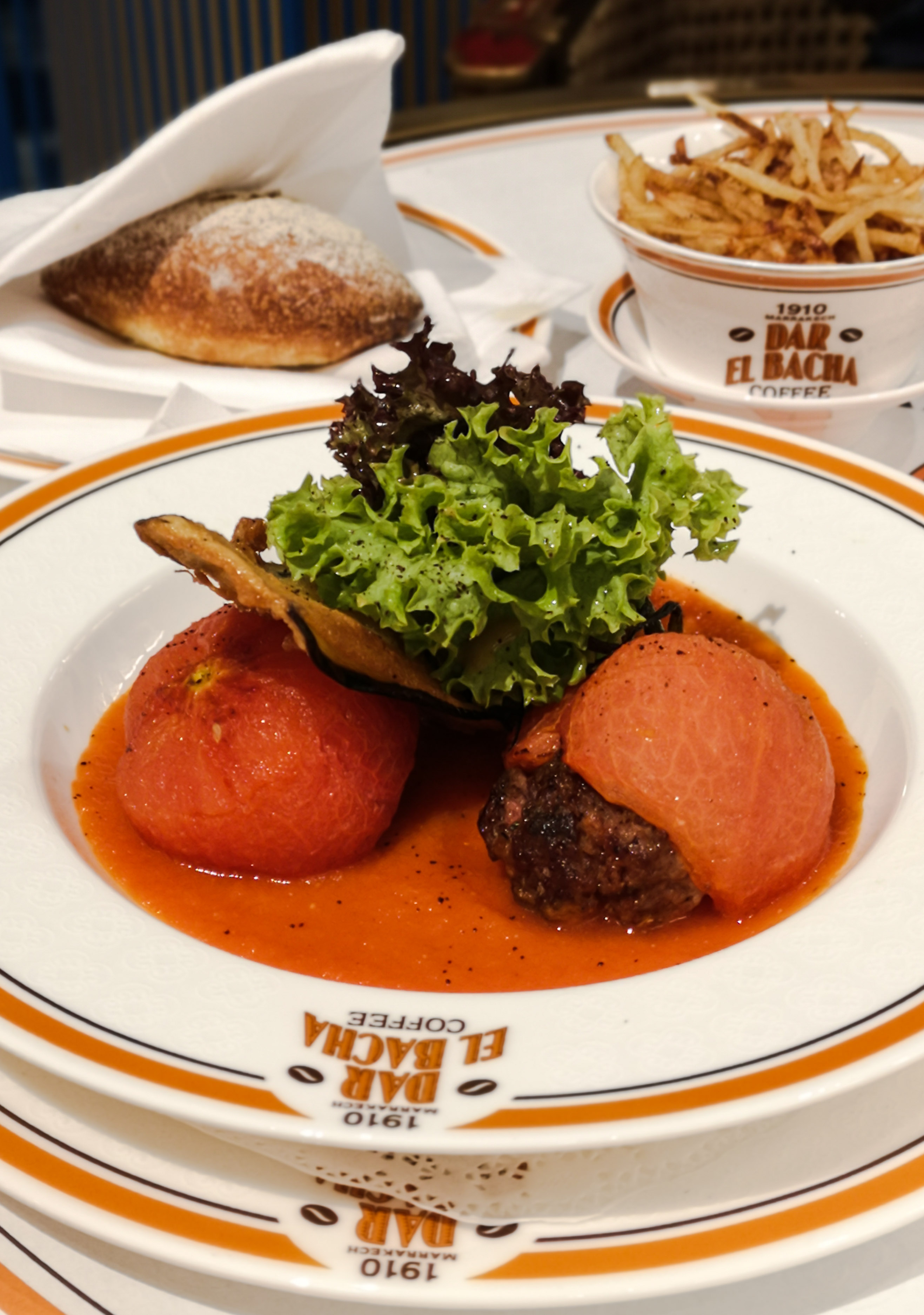 Having initially wanting to opt for the set menu, we eventually ordered all the items ala-carte as the Weekly Set Menu was only applicable to the Barramundi Tajine during the day of our visit. We eventually ended up with the Moroccan Kefta Meatballs, gravy, straw potato fries — an item which had caught our attention when we skimmed through the “Meat” category from the “Menu presented by our Chefs” section of the menu. Served in a portion of three meatballs, the meatballs come encased in an assortment of greens including that of zucchini and tomatoes, whilst also coming with a thin slice of fried zucchini, as well as a bread on the side and the straw potato fries on the side. Starting off with the bread, the bread was nothing short of being amazing with its crusted exterior and dense interior which provided a good chew; pretty firm gives a good bite — we could imagine how good this would be with butter served on the side. Digging into the main deal, the Moroccan Kefta Meatballs were pretty delicious; the exterior was well-crusted, while the meat was not particularly gamey — easy to chew and provided a meaty bite. Encased within a variety of greens, the ones stuffed within the tomatoes were pretty refreshing — the fleshy tomato helps to enhance the textures even further by giving it a soft but firm bite, whilst also adding a refreshing zing to cleanse the taste buds and cutting through the meatiness of the meatballs. The fried zucchini was almost akin to that of a fried tempura item; coming with a very light, golden-brown batter on the exterior, it provided a soft crunch which helps to bring a contrast of textures to the dish. Coming at the side is the Straw Potato Fries; thinly-sliced fries that seem to be shredded off a potato rather than sliced — pretty crisp and well-seasoned with salt, the fries here do not feel in any way jelak, and keeps one yearning for more. Patrons can also choose to go for a sprinkling of their special coffee-infused peppers, where the staff would crack the pepper right at the table if requested. 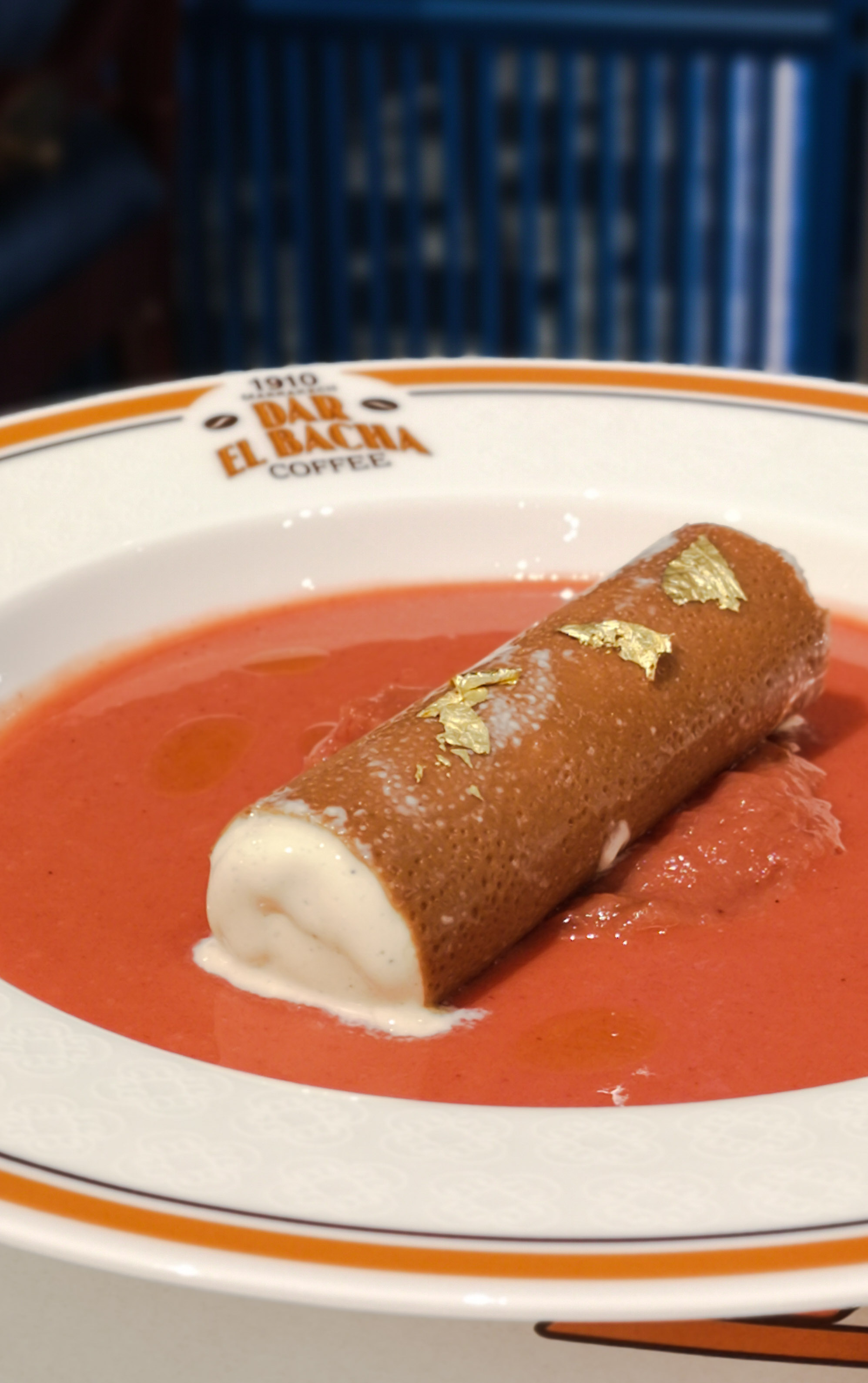 To end off our meal with a dessert, we went for the Strawberry Soup, Rhubarb, Olive Oil, Tahitian Vanilla Burundi Express Coffee Ice Cream. A pretty refreshing dessert on its own, the Strawberry Soup comes pretty tart; the zing helping to refresh the taste buds and would be a hint for those who prefer sour desserts. The Rhubarb helped to further enhance those zingy notes and adds texture, being a Compote that sits under a thin, cracker-like shell that is shaped like a cigar which readily shatters with a poke from the fork to reveal the Tahitian Vanilla Burundi Express Coffee Ice-Cream. Whilst being infused with coffee, the flavours of the coffee is not particularly prominent within the ice-cream; seemingly being more of a Tahitian Vanilla ice-cream at heart which still went pretty well with the other elements with its neutral notes which is pretty aromatic. 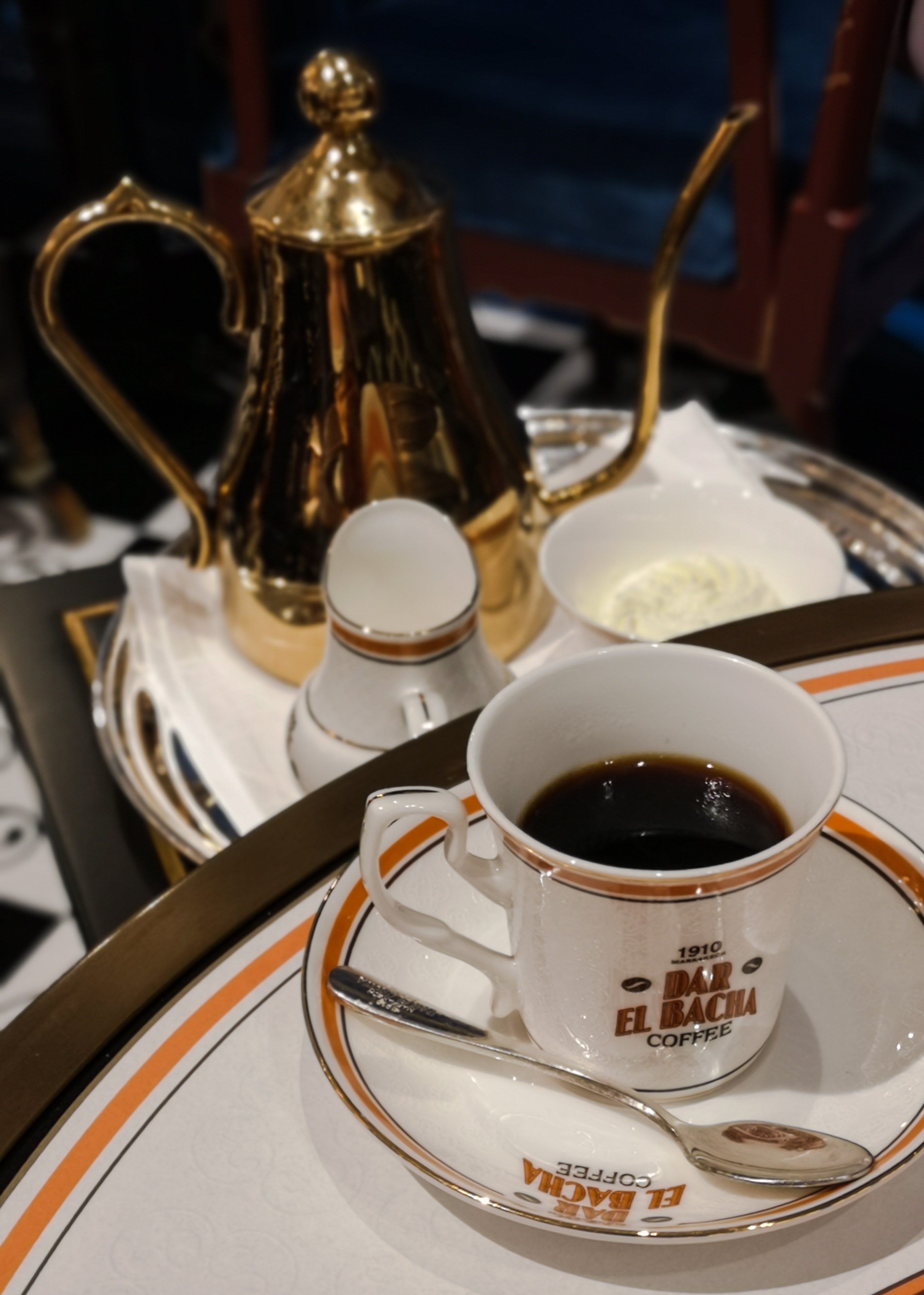 Given the sheer number of types of coffee available, we found ourselves narrowing down to the selection of “Fine Flavoured Coffees” available considering how this section of the menu is pretty unique to Bacha Coffee themselves. Opting for the Caramelo Morning Coffee after a recommendation from a wait staff, this was a coffee that we found pretty suitable for those who prefer smoother coffees with a sweeter finish. Served in a jug, the serving size was good for three cups. The coffee came with a fruity body; pretty balanced whilst leaving a clean finish — itself being fairly smooth and somewhat “creamy” with a slight sweetness for its finish. For those who find it a must to have creamers or milk in their coffee, Bacha Coffee does serve up fresh chantilly cream and full cream milk alongside every pot of coffee to be added to the patron’s preferences. A fairly easy coffee to drink, this would work well for a leisurely cuppa at any point of the day. 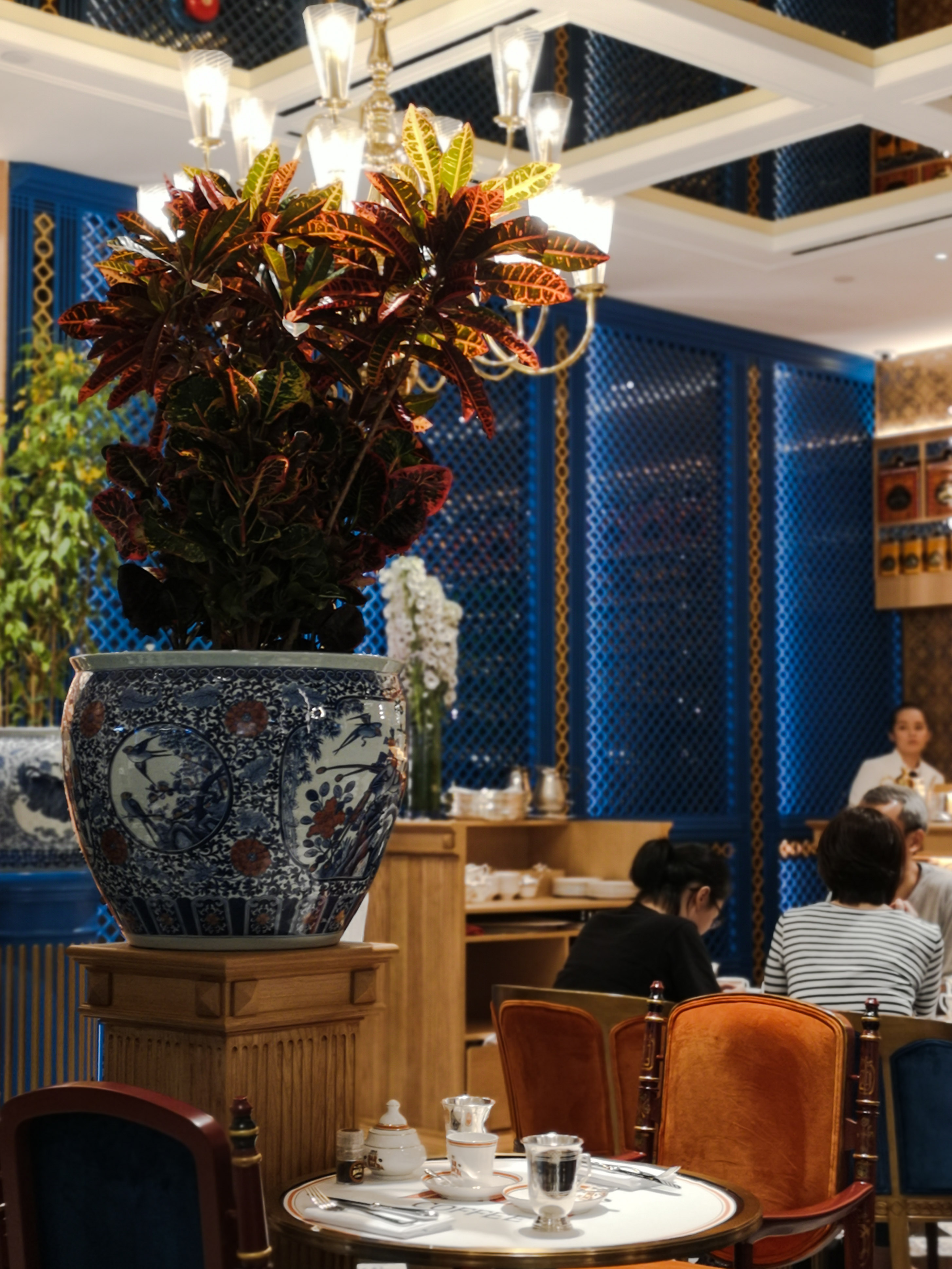 Having tried a number of items off Bacha Coffee’s menu, we were pretty impressed with what they have to offer. Having their focus on coffees from all over the world, there is a considerable effort in trying to incorporate that concept into its menu. Not only does Bacha Coffee offer a very wide variety of coffee in its beverage menu, but we were also pretty surprised by how they had even added some of that touch into its food menu, with the use of coffee-infused pepper and ice-creams to further emphasise on their speciality. Despite some of the elements being a little less prominent than others (i.e. the coffee-infused pepper and the coffee-infused ice-cream), our experience at Bacha Coffee was still nothing short of being amazing. Sure, Moroccan cuisine is something which is rarely found in Singapore, thus difficult to make comparisons with in terms of the authenticity of the food served at Bacha Coffee, but the food was prepared with much thought, effort and care; much of it being in the same lengths as it is for their impeccable service and strong emphasis on its theming. The vibe was nothing short of being on point, with classical music that very well suits the grandeur of its decor; something which seemingly is a feat that TWG Tea can only achieve. Given how Bacha Coffee would appeal to a certain sort of crowd, this would be a spot that would appeal to expats and taitais alike; somewhere that would attract the crowds with a slightly higher spending power as compared to those at hipster cafes to pop in just to rest their legs over a day’s worth of shopping for some pastries and coffee. A spot that we would likely see ourselves returning again for its vibes, Bacha Coffee is a place to add to the list of serious coffee-lovers looking to try a wide variety of blends and single-origin beans as well.