Operating as Hustle Co. previously, Hustle Co. had moved out of its former premises at Craig Road several months ago, and had moved into their new space along Hamilton Road pretty recently. 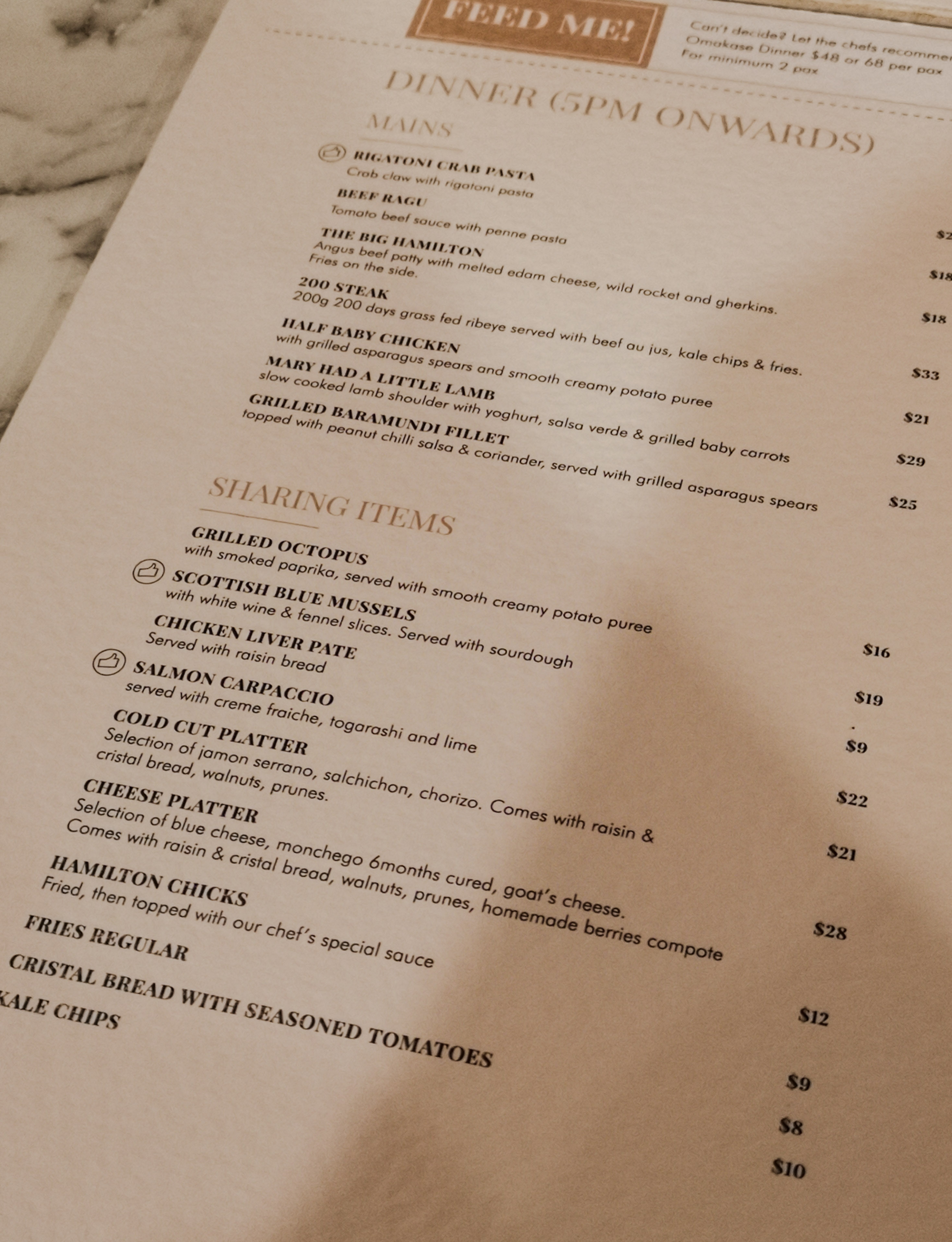 Now known as 11 Hamilton, 11 Hamilton is more than just a cafe-cum-bar concept; the space now also houses an event space within its premises. While the entrance of the event space is situated right at Hamilton Road, the entrance for the cafe is hidden away from the main road; instead, it is located at the back alley that gives it a sort of underground-ish vibe that works really well as a drinking hole. Walking in from the back alley, one would be first greeted by the cakes displayed behind the counter, which are sourced from InTheBrickyard; a local home bakery that used to operate from several locations including Salut Coffee Shop at Bukit Merah and also previously supplying their cakes to now-defunct Merriment at JTC Summit in Jurong East. The space is decorated to a modern-chic theme; using furnishings and fittings that employs the use of metal, velvet and wood, the walls are also decorated with murals and quotes that one would be able to find in cafes with a similar theme — a sliding wood door at the end of the cafe area leads to the event space that faces Hamilton Road. Having made some adjustments to their offerings since their days as Hustle Co., 11 Hamilton now serves up two different menus at different hours of service; one being the Brunch menu and the other for Dinner service. Being known as a drinking hole when they were still Hustle Co., 11 Hamilton had since expanded their drink selection to include gin and tonic options apart from craft beers, whilst also offering coffee and tea apart from other beverages for those who are looking for something non-alcoholic. 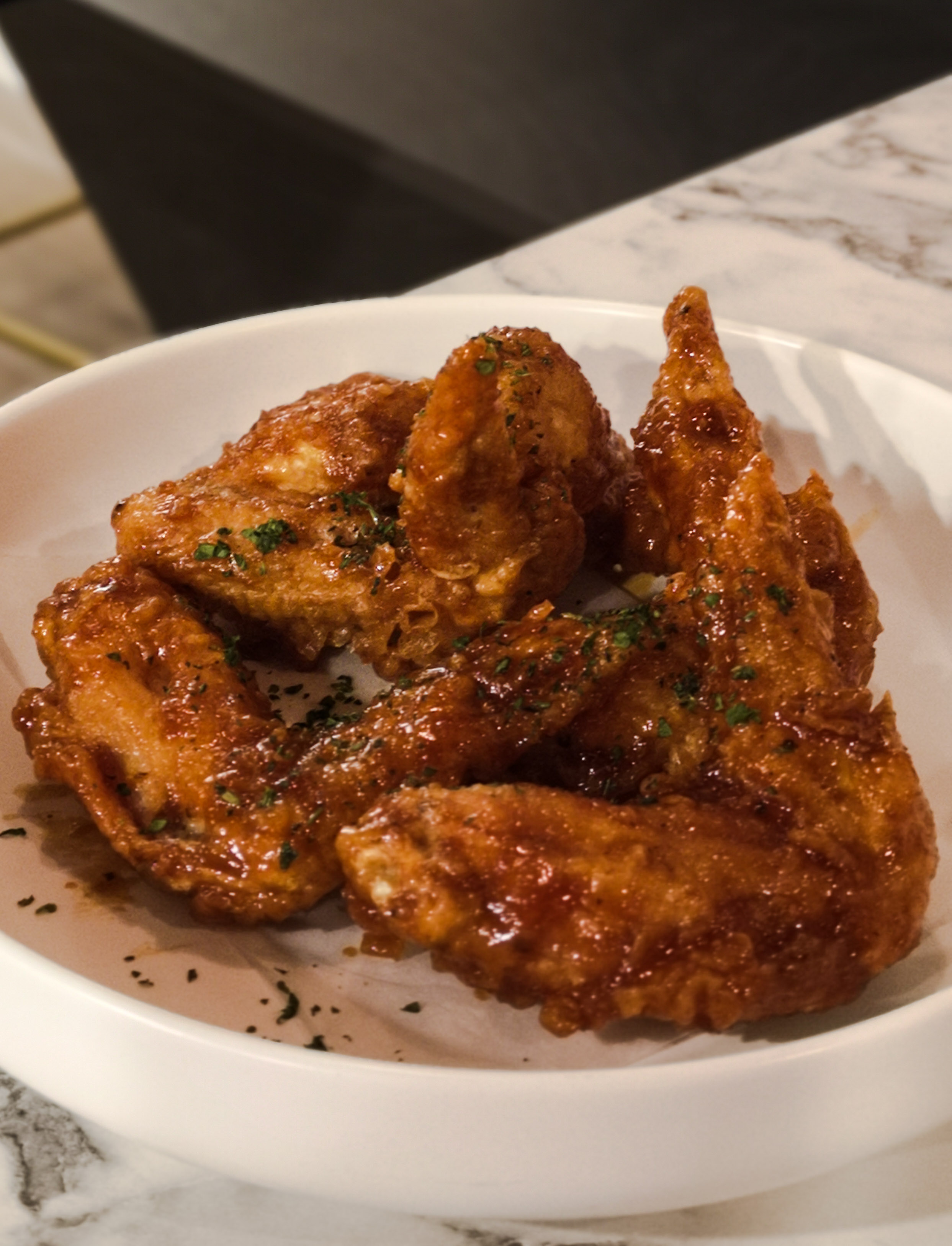 Going for an item to share around the table, we went for the Hamilton Chicks; essentially fried chicken wings that are coated in Korean spicy Yangnyeom sauce — a pretty decent option for something on the safer side for the less adventurous. The wings are well-fried; juicy and succulent on the inside while the sauce coats the exterior without sogging up the crisp batter on the outside — the batter also not being particularly thick as well. Coated with the Korean spicy Yangnyeom sauce, it helps to give the wings a hint of sweetness and spiciness; umami whilst giving a slight kick to the taste buds which should be pretty manageable for those who are tolerable to moderate levels of spiciness. 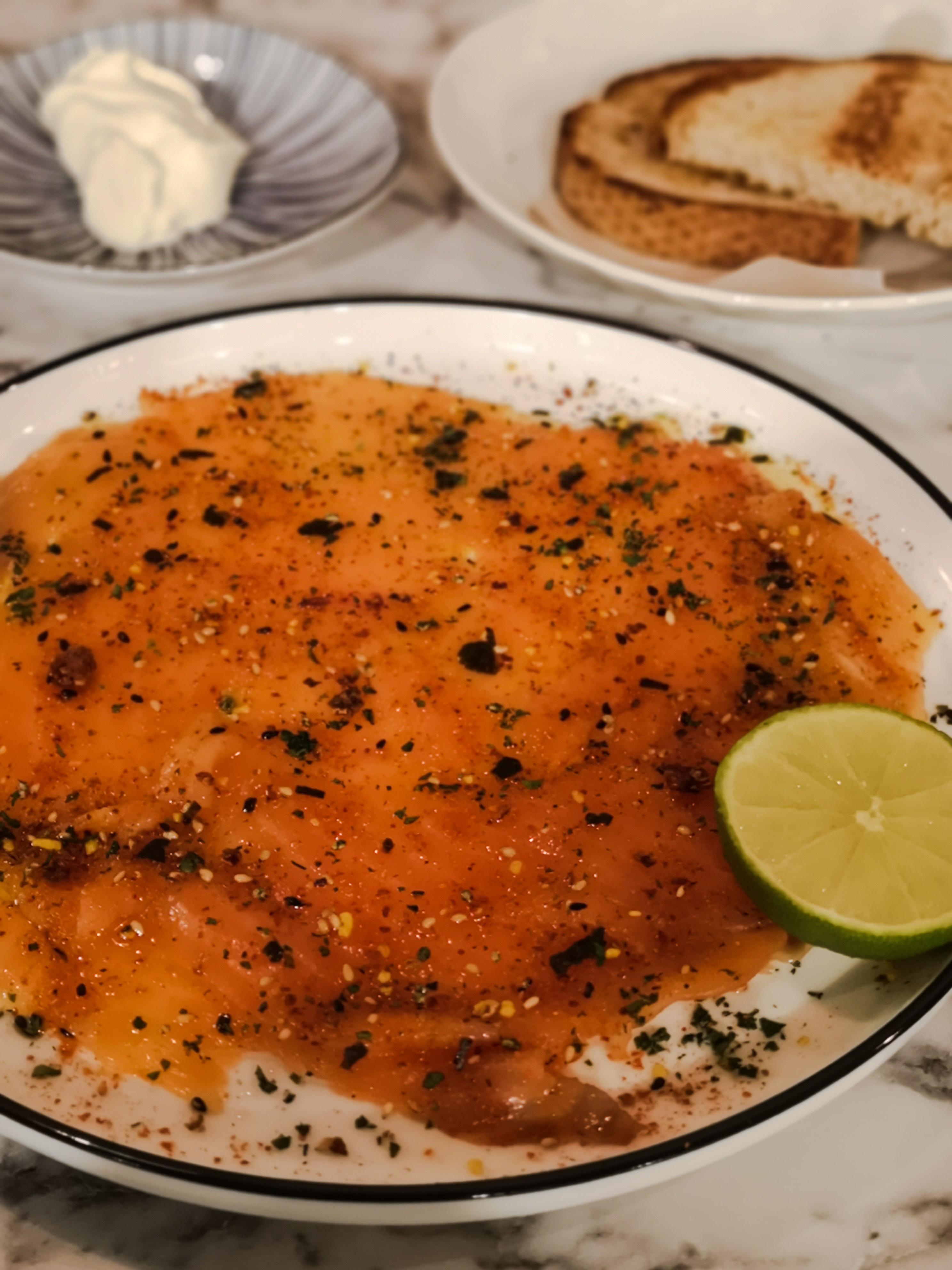 We also went for the Salmon Carpaccio, which featured elements such as Creme Fraiche, Togarashi, and Lime — an item that was recommended on the menu. Adding the Togarashi to the cured salmon, the Togarashi helped to add an umami note to the already savoury slices of salmon. Also offering two slices of toast on the side for those who might want to spread a little bit of the Creme Fraiche on the toast to top it off with some of the cured salmon, the toast came pretty crisp on the edges with a good chew within; all that with a slight char which helps to provide a contrast of flavours and textures to the dish — the toast being so good that we can have it on its own. Having the entire dish with all of the elements together, the creme fraiche helps to bring the Salmon Carpaccio and the toast together; helping to add some creaminess that binds the two elements together while the lime helps to cut through the heaviness of the cured flavored with a slight zing. That being said, we do feel that the portion of two slices of toast was not quite sufficient to go around the portion of salmon; would probably help if they could provide three to four slices of toast with each order, whilst cutting down on the portion of Creme Fraiche served with each order as it seemed a tad excessive. Still, a pretty good item worthy of its recommended status on the menu. 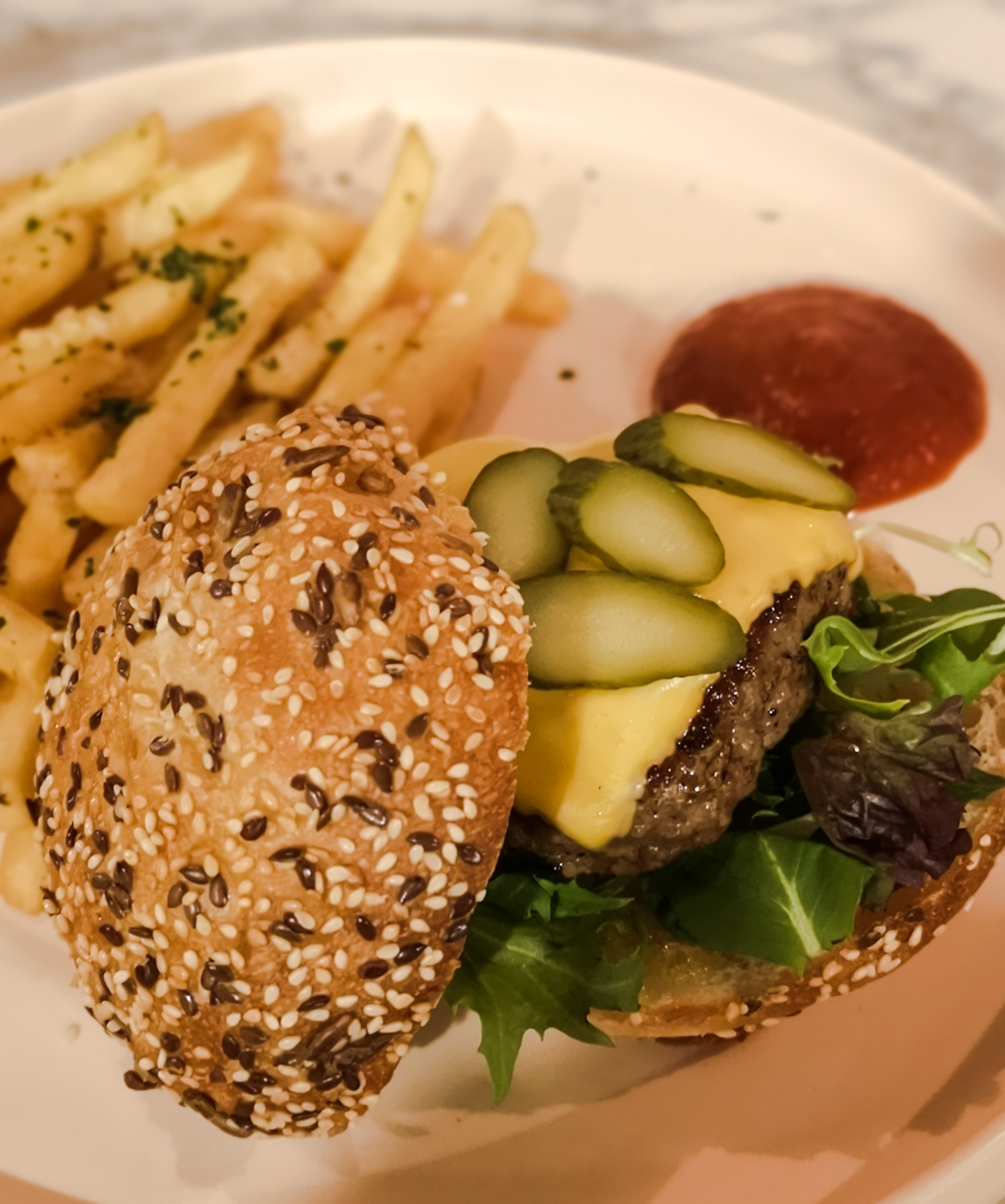 Sharing a main from the menu, we had The Big Hamilton; a burger which consists of elements such as Angus Beef Patty, Melted Edam Cheese, Wild Rocket and Gherkins — the item also comes served with fries on the side. A pretty decent burger, the burger itself was nothing to shout about — a rather standard Cheeseburger with a slight twist considering the slight switch-up of burger buns; something which should gel well with those who want to go for something familiar. The beef patty was in no way gamey, and while does not crumble down messily, the beef patty could have been better if it was less dry. Fries were good; crisp on the exterior whilst not too greasy — came with a sprinkle of sea salt for seasoning which helps to ante up the flavours overall. A pretty decent item to order from the menu here. 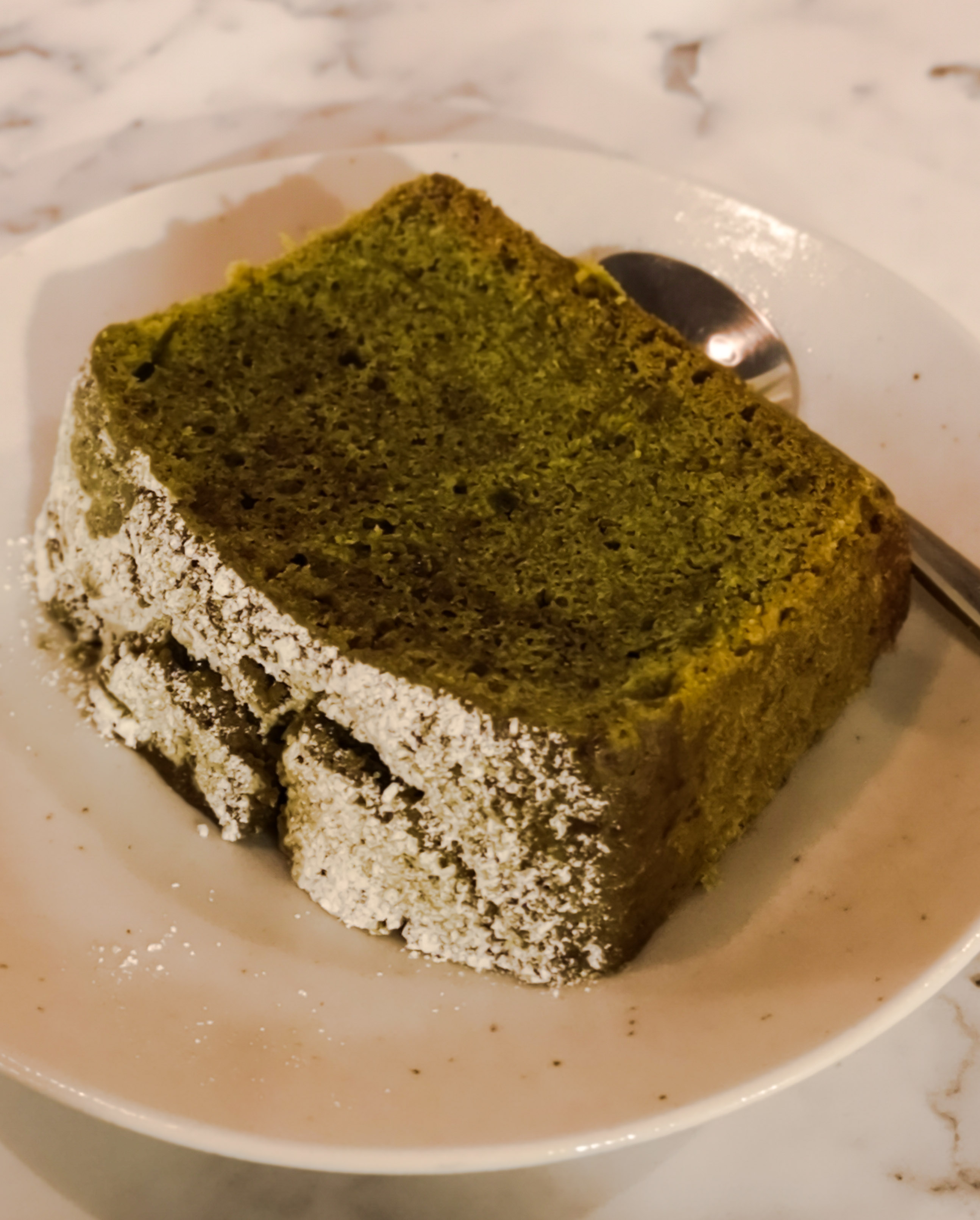 Not missing out on the cakes from InTheBrickyard, we also went for the Matcha Loaf. The Matcha Loaf was truly impressive; soft and fluffy, the bitter undertones of the tea was prominent — not disturbed by any sweetness or cream considering how this is a simple loaf cake. A pretty good attempt on a Matcha Loaf that we would certainly want to have again; something which would appease the Matcha lover. 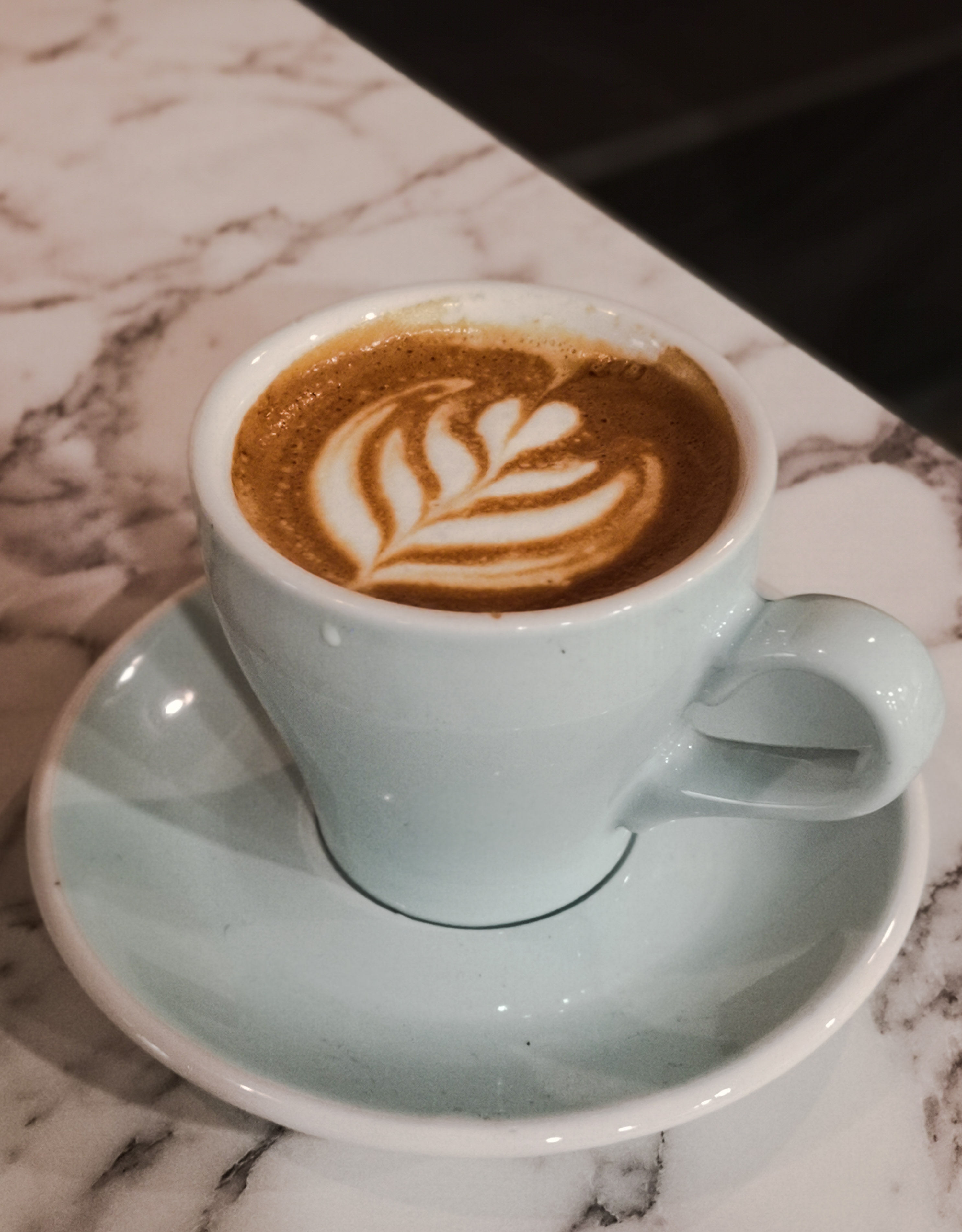 Going for the usual cuppa, we went for the Flat White; coming with a strong body and an earthy and roasty flavour profile, the Flat White here would work well as a perk-me-up. 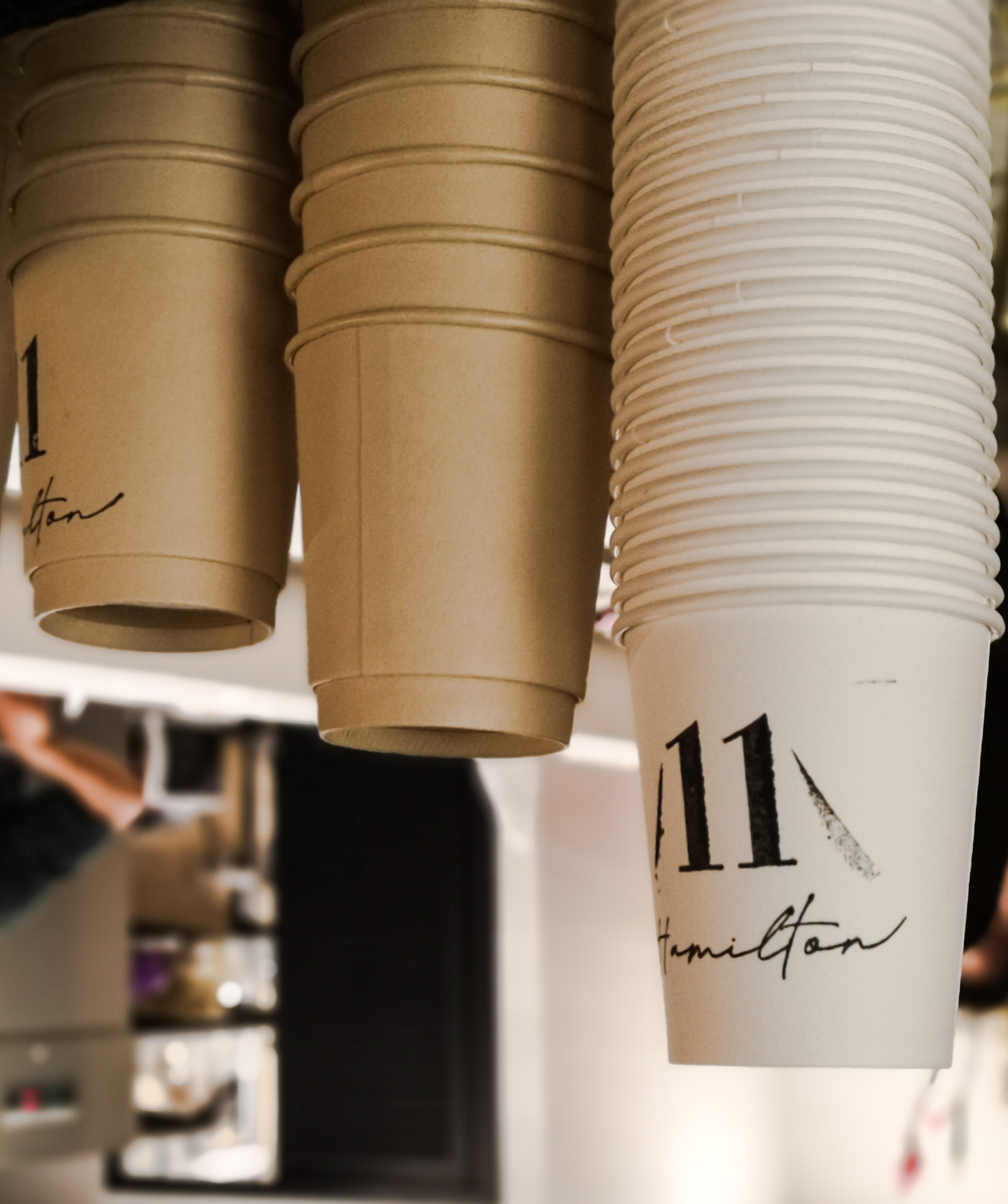 Having only tried the dinner menu, 11 Hamilton does feel like a spot that would work as a great spot for a date for brunch, whilst being the mysterious hang out in the neighbourhood by the time the sun sets — the back door entrance probably being a large factor of its night-time appeal. While the items we had tried were largely decent, we felt that there is some room for improvement in the overall execution and portioning of their dishes as mentioned earlier — otherwise, the food should pretty much sink in well with the masses and seemed to pair just about right with the alcoholic options that they have to offer. We were particularly impressed with the Matcha Loaf, however; an item that we might actually make a return visit for considering how intense it was. Service was actually pretty decent, with the staff checking on us if we needed the tables to be cleared (the tables were rather small and had trouble fitting more than two main courses at one go) or if we needed our glasses to be refilled or if we needed anything else. Given its environment and its offerings, 11 Hamilton would make a decent spot for dates or just a catch-up; a place to consider visiting when in the neighbourhood.