With To-gather Cafe closing its doors some time back, Power Coffeehouse had since moved into its premises, providing residents in the area yet another option for dining in the neighbourhood. 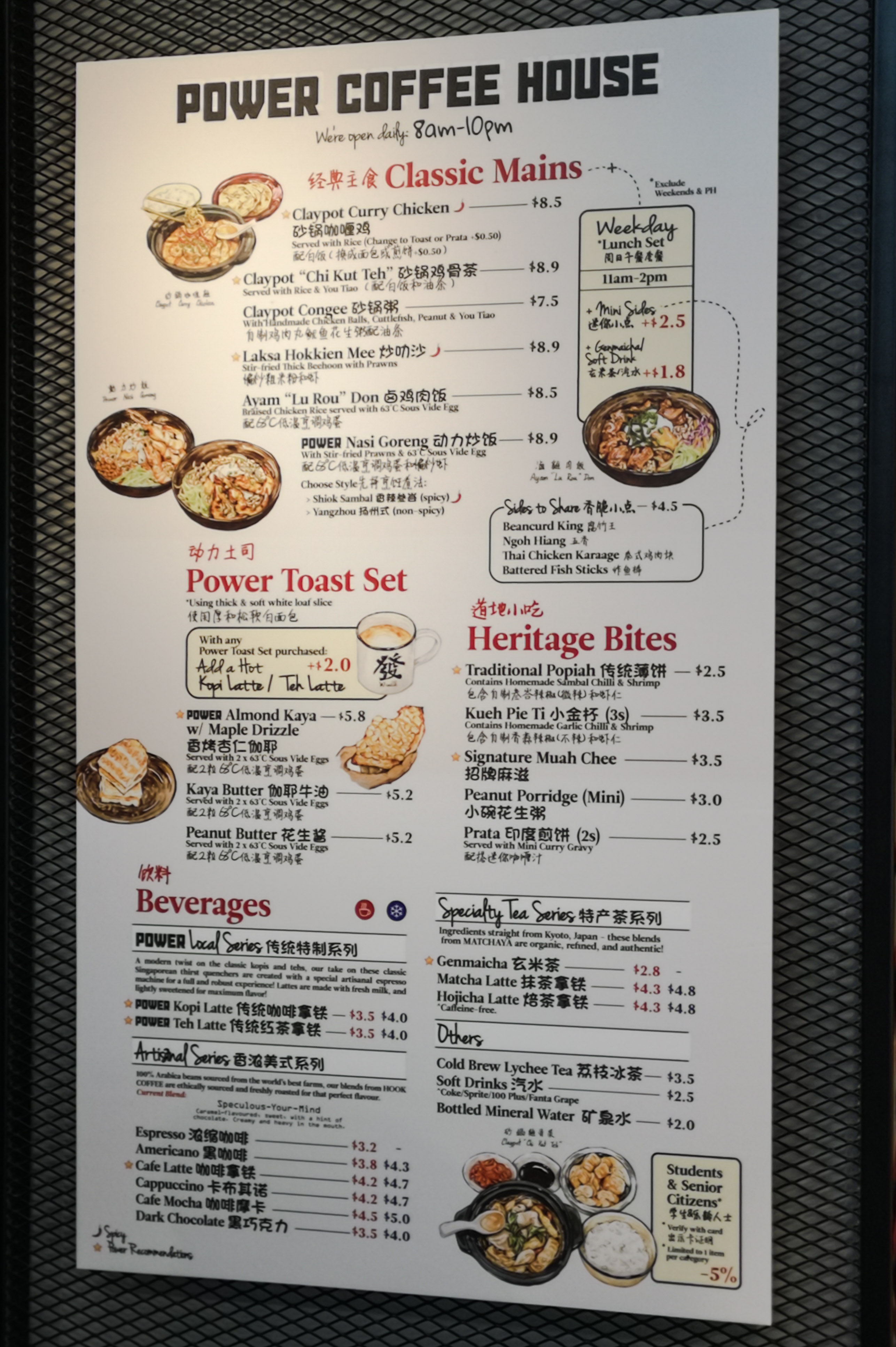 Situated at where now-defunct To-gather Cafe used to be located at, Power Coffeehouse is a new establishment that focuses on local fusion cuisine. Having taken over the space, Power Coffeehouse had done some renovations to the the space; some interior furnishings and fittings remain much the same, with the familiar metallic fittings and grey walls being carried over from the former tenant. That being said, the space had since been spruced up with some slight changes to the layout being made; the ordering counter is now located by the right side of the shop; a rather odd layout that is not new, but yet not too common with other cafes situated in HDB shop spaces in other estates. The space also carried a slightly more local touch with the use of wooden furnishings and fittings, though the colourful look does make the interior look a little more vibrant than that of the average locally-inspired establishment. With most other establishments serving up fusion food being very much focused to serve up Western Asian fusion cuisine, Power Coffeehouse takes a step further by serving fusion cuisine using different local elements; taking two local favourites as an inspiration for a single menu item. Serving up mains, as well as local breakfast dubbed their Power Toast Set, Power Coffeehouse also serves up a variety of light bites and a good selection of non-alcoholic beverages to choose from. 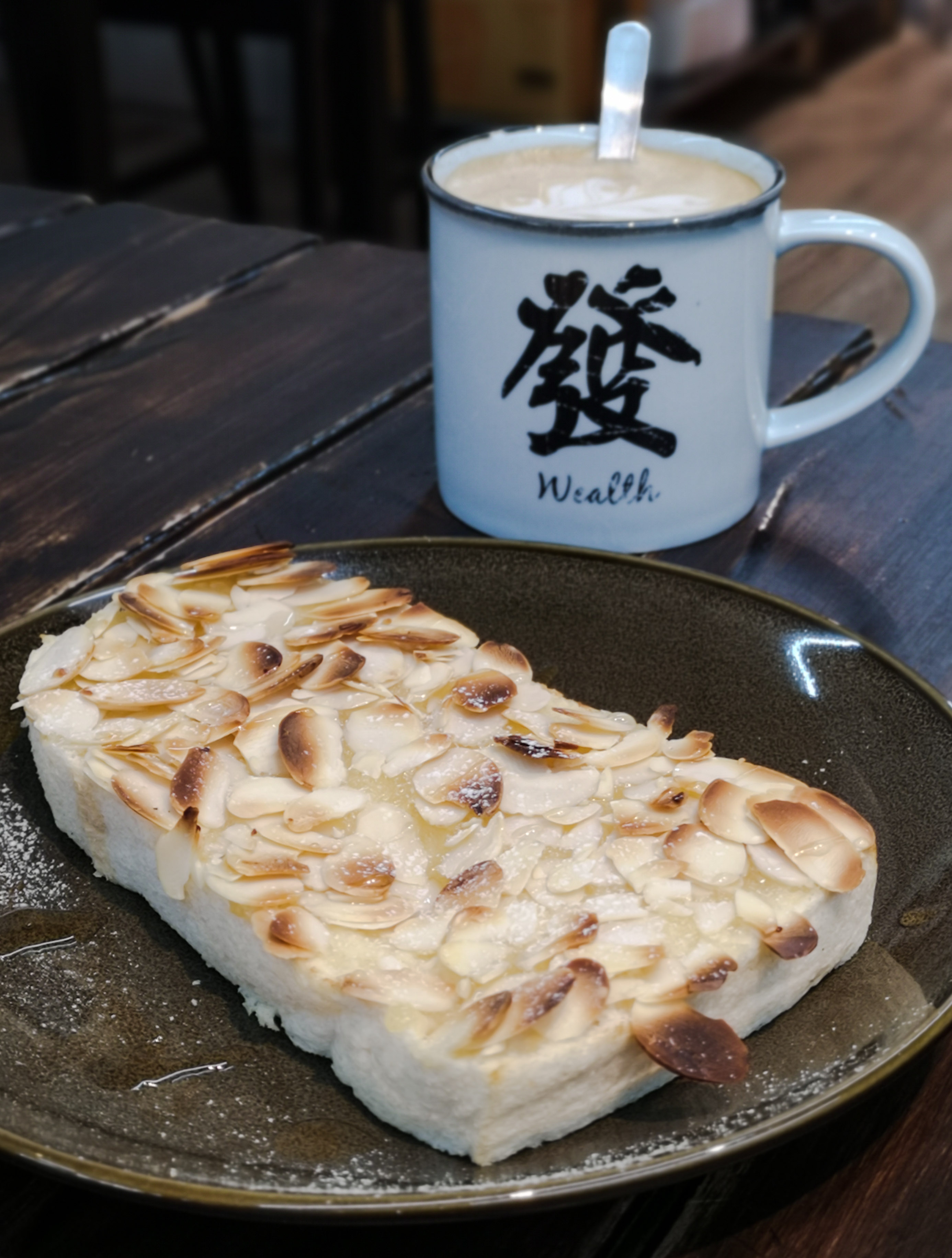 Going for one of the Power Toast items from the menu, the item that stood out whilst skimming through the menu was the Almond Kaya with Maple Drizzle. Patrons can also choose to opt to go for a set, which comes with sous-vide egg and a drink of their choice; we went for the ala-carte item instead. Served on a slice of fluffy white bread, the Almond Kaya with Maple Drizzle is a simple delight that is a twist to the usual Kaya Toast that we are all familiar with. Spreading the light and fluffy white bread with a layer of Kaya, toasted almond slices are added above to the kaya for a roasty and nutty crunch; the maple drizzle helps to add a hint of sweetness that complements with the toasted almond slices well. A pretty comforting item to have for breakfast, or a great item to share at the table whilst enjoying a cup of coffee whilst catching up with a friend. 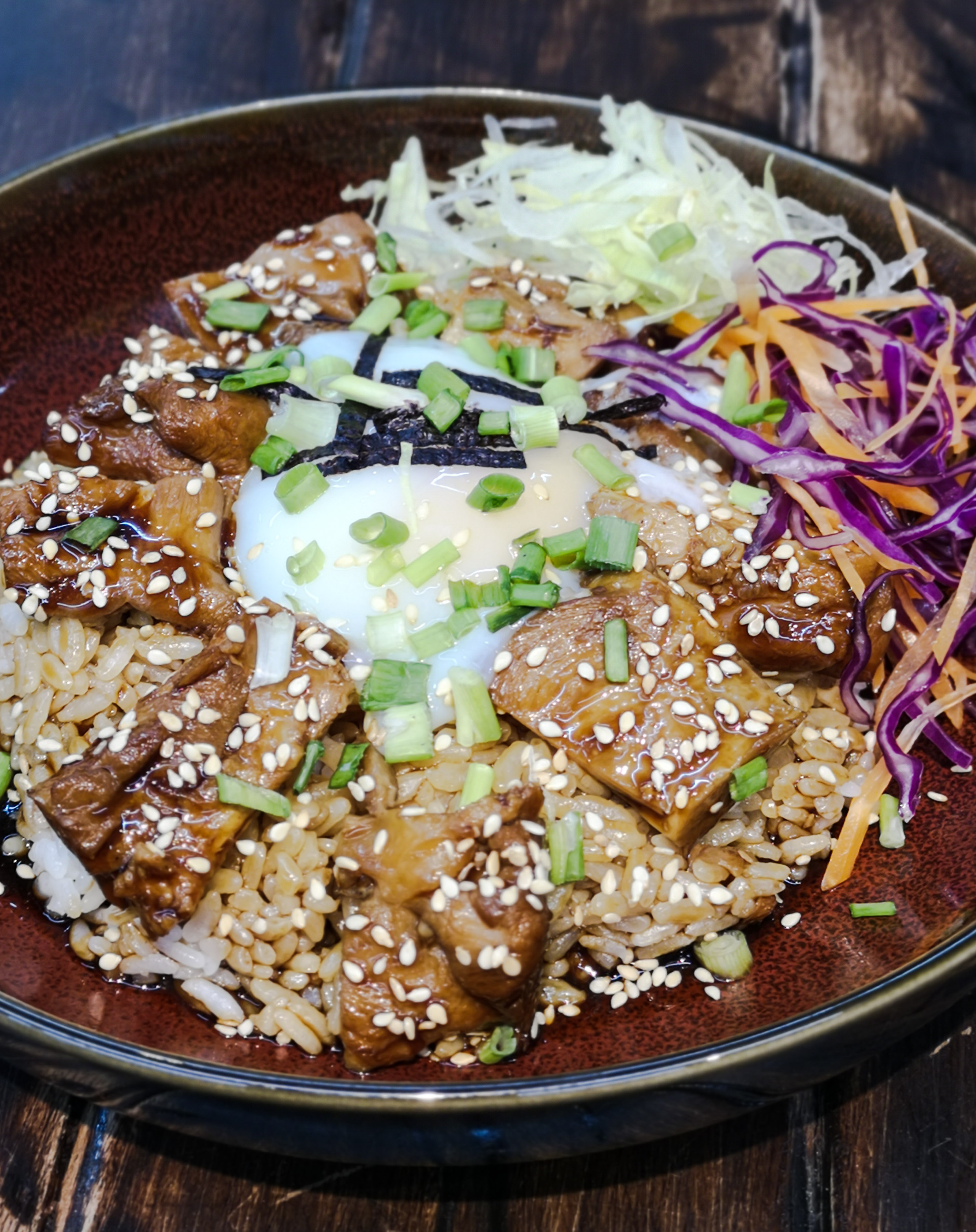 Opting for a main, we also went for the Ayam “Lu Rou” Don; essentially Braised Chicken Rice served with a Sous-Vide Egg. Coming with chunks of braised chicken, the rice also comes drenched in a savoury braised sauce. Breaking the yolk of the wobbly sous-vide egg, the yolk helps to bind the rice and the meat for a silkier texture. Coming with a slaw on the side, the slaw also helps to provide a crunchy bite to the rice bowl, while the tender meat provides a meaty bite and chew to the entire bowl without working out the jaws too much. Simple as it sounds, the Ayam “Lu Rou” Don would be a comforting item for those looking for something simple yet homely and satisfying to have. 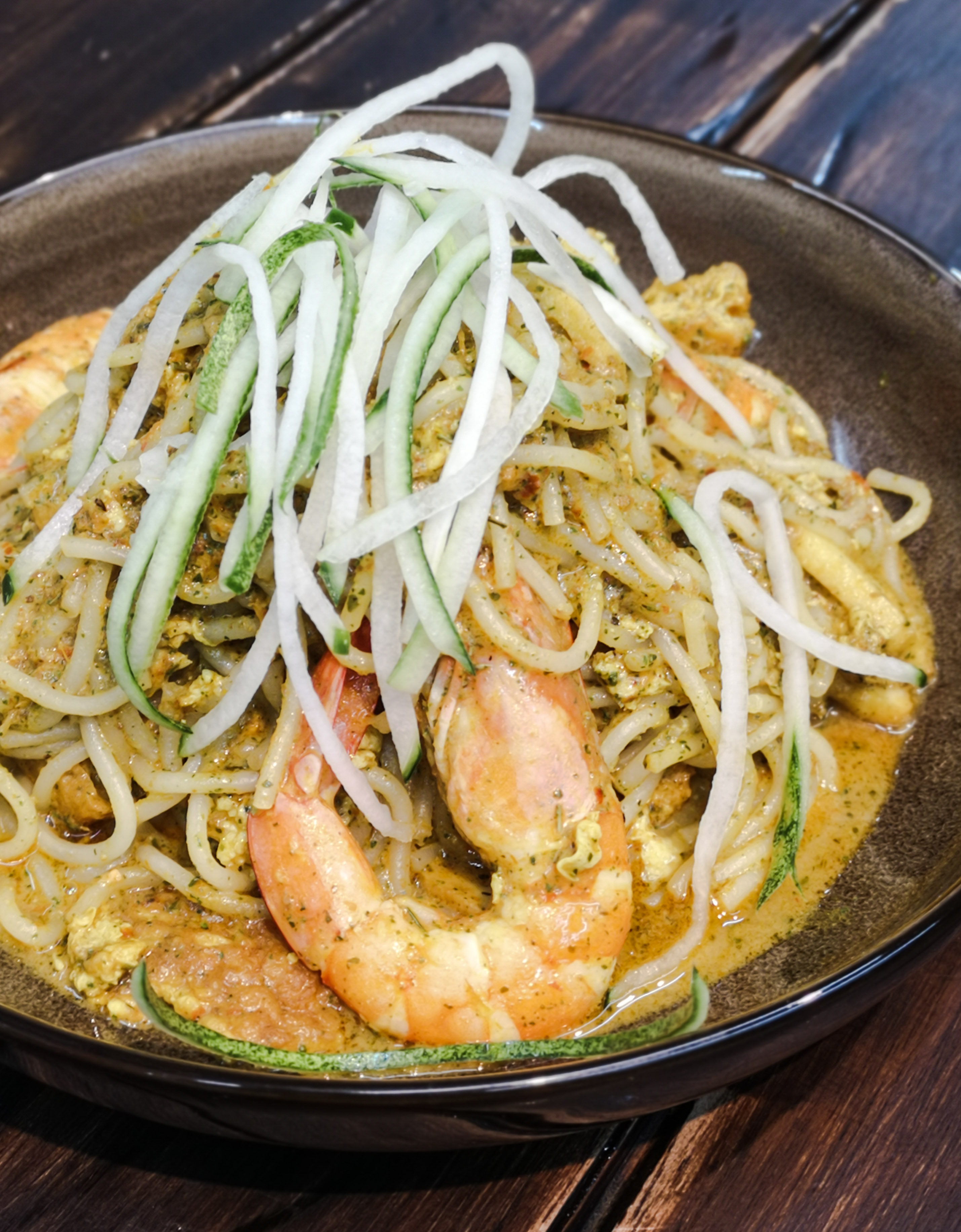 We also went for the Laksa Hokkien Mee; essentially Stir-Fried Thick Beehoon served with Prawn, which seemingly made the item felt a little bit more like “Dry” Laksa instead. Whilst the Laksa Hokkien Mee did carry evident hints of rempah spices and carried a fragrant aroma and a spicy kick that should be pretty acceptable to those who are accustomed to moderate levels of spiciness, it felt missing of other elements usually found in Hokkien Mee such as yellow noodles, pork slices, and sotong; all of which being ingredients that are typically found in a standard Hokkien Mee. That being said, the Laksa Hokkien Mee did fare well being a “Dry” Laksa, carrying flavours that replicates Laksa pretty well; the prawns included in the dish was also worth noting for its freshness, carrying its natural hint of sweetness and carrying a good bite without being mushy nor with the shell being difficult to peel. 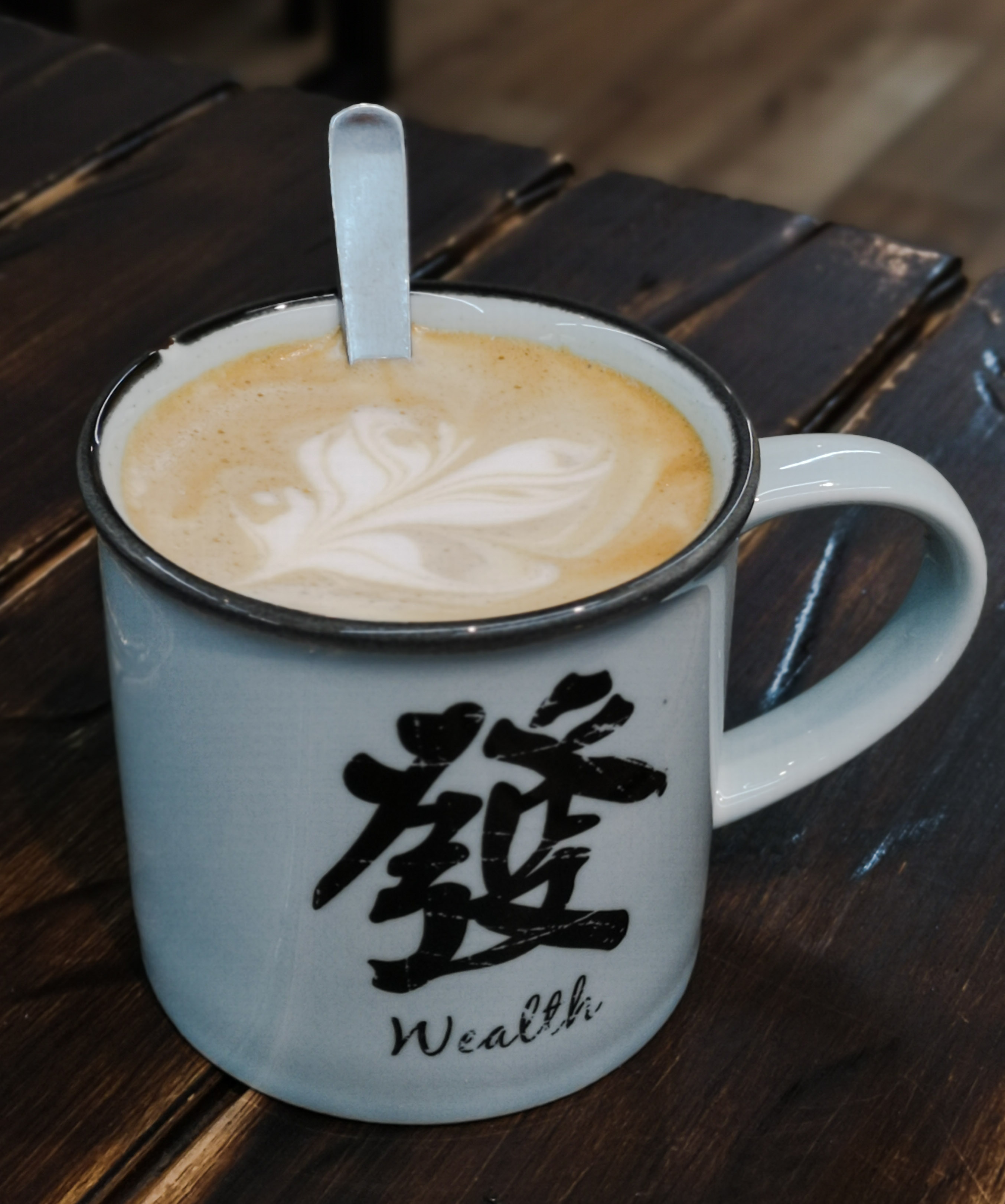 Being described as “a modern twist to the classic Kopis and Tehs”, the Power Local Series of beverages is their take on the classic beverages “created with a special artisanal espresso machine” that is made with “fresh milk, and lightly sweetened”; a description that somewhat reminds us of Keong Saik Bakery‘s which created a pretty strong impression with us. Trying their Power Kopi Latte, one could notice how the cuppa came with intricate latte art; having our first sip, we felt that the coffee carried a rather roasty aroma, though might have been a little burnt considering the high temperature that it was served in. That being said, the Power Kopi Latte does carry a hint of sweetness, though albeit on the lighter side especially towards its finish, which should work well with the health-conscious folks who may be wary of the amount of sugar added to their coffee. Whilst not being the first establishment to brew local coffee in this manner, the Power Kopi Latte is still a pretty interesting concept that fits with the concept very well. 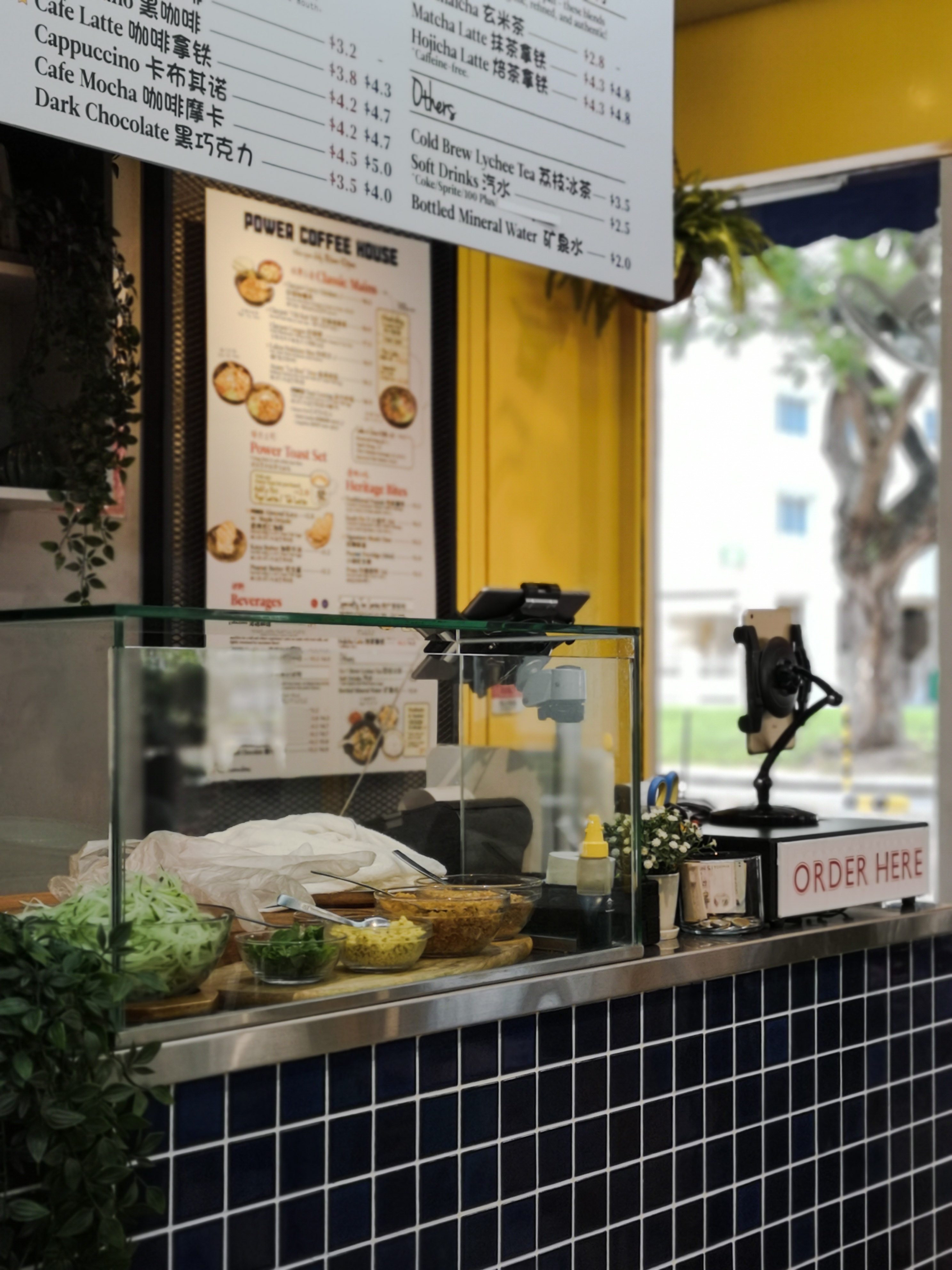 Having tried the various items that Power Coffeehouse has to offer, it seems that Power Coffeehouse is a place that would serve the area pretty well. While most cafes seem to be serving local fusion cuisine or specific types of cuisine that targets only a certain group of people. Power Coffeehouse attempts to serve up fusion dishes using different types of local cuisine to bring their dishes to a higher level of familiarity with their patrons. In other words, the items served at Power Coffeehouse tries to bring the patrons closer to home than ever, providing comfort food that is a step away from what is being served at hawker centres (i.e. 85 Fengshan Centre nearby) yet with a twist that justifies its slightly higher price tag. The food quality is generally pretty decent, with the items carrying their flavours pretty well and satisfying; the prices also kept at competitive levels to attract patrons who may be looking for something more than the typical local fare without having to splurge excessively for a space with better vibes. Given its vibes and food quality, Power Coffeehouse is certainly an interesting addition to this vibrant neighbourhood; a destination that we would recommend to visit at least once to try their out their unique offerings in a laidback environment.