The Tendon craze might have since settled down ever since the opening of many Tendon specialty shops across the island a couple of years ago (e.g. Tendon Kohaku, Akimitsu, Tendon Ginza Itsuki, Don Meijin, etc.), it does not seem to stop new entrants into the local dining scene here. 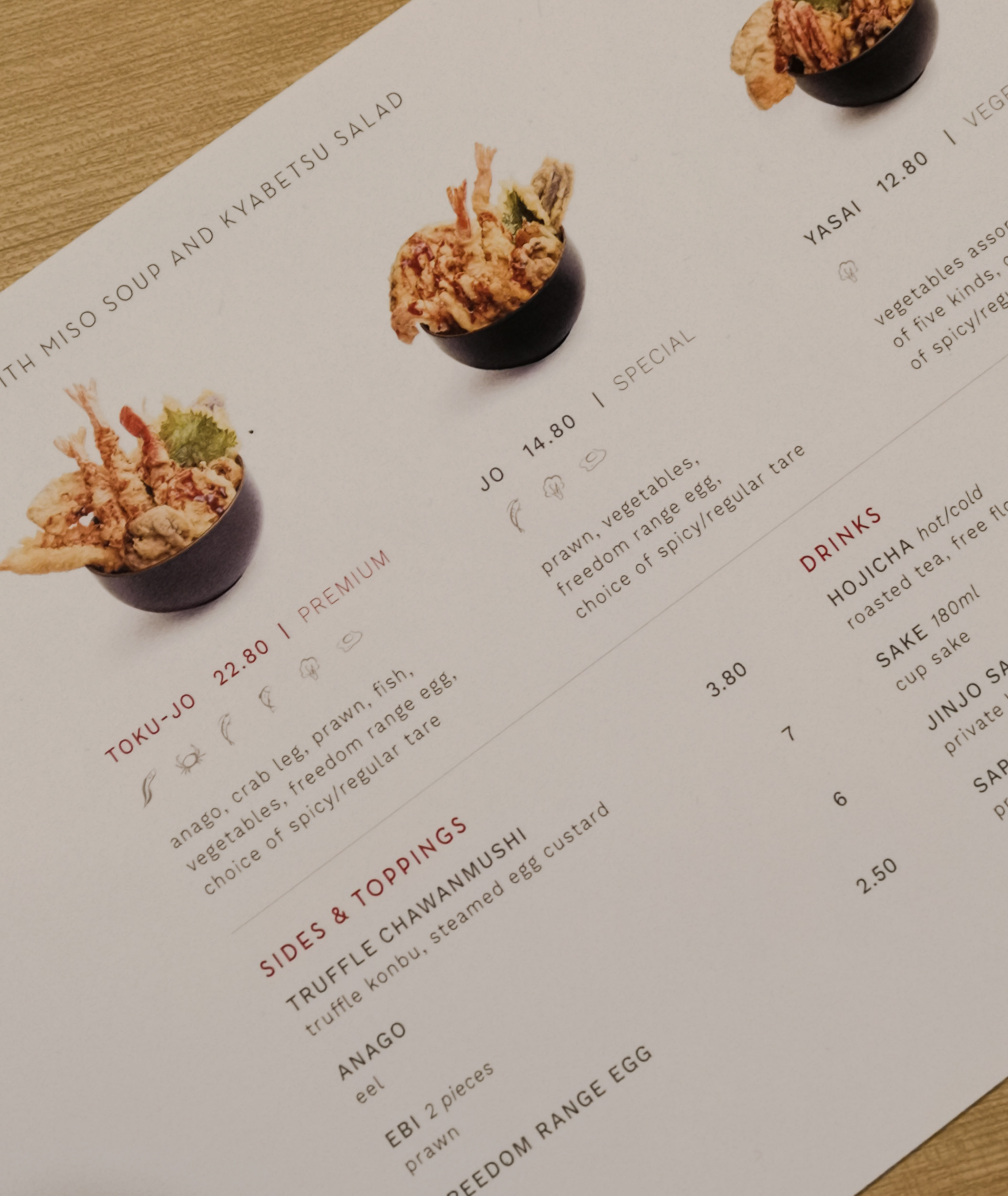 Opened recently at Level 3 of Shaw Centre, Tenjin is the latest dining concept to have opened its doors in Singapore; taking over part of the space that was previously occupied by now-defunct Circa 1912, Tenjin is situated in between two other equally new establishments; Kausmo and Indigo Blue Kitchen — both of which being brands under the Les Amis Group which had also brought us other concepts such as Nam Nam Noodle Bar, Aoki, Jinjo and many more, and including Les Amis itself. Decked just like a traditional Japanese eatery for its exterior with a cloth draped at the entrance, the interior features a clean, minimalistic appearance that is decked with wooden furniture and fittings — the decor being simple yet chic and modern without being too pretentious, but still able to maintain a form of classiness and style. Going through the menu here, the Tendon offerings are pretty limited; much like any other Tendon specialty stores, Tenjin only features three different varieties of Tendon, one being a vegetarian variant whilst also offering a list of sides. Beverage options do include tea (Houjicha) as a non-alcoholic option, though the beverage list features a small variety of Japanese alcohol that should pair well with the fried food. 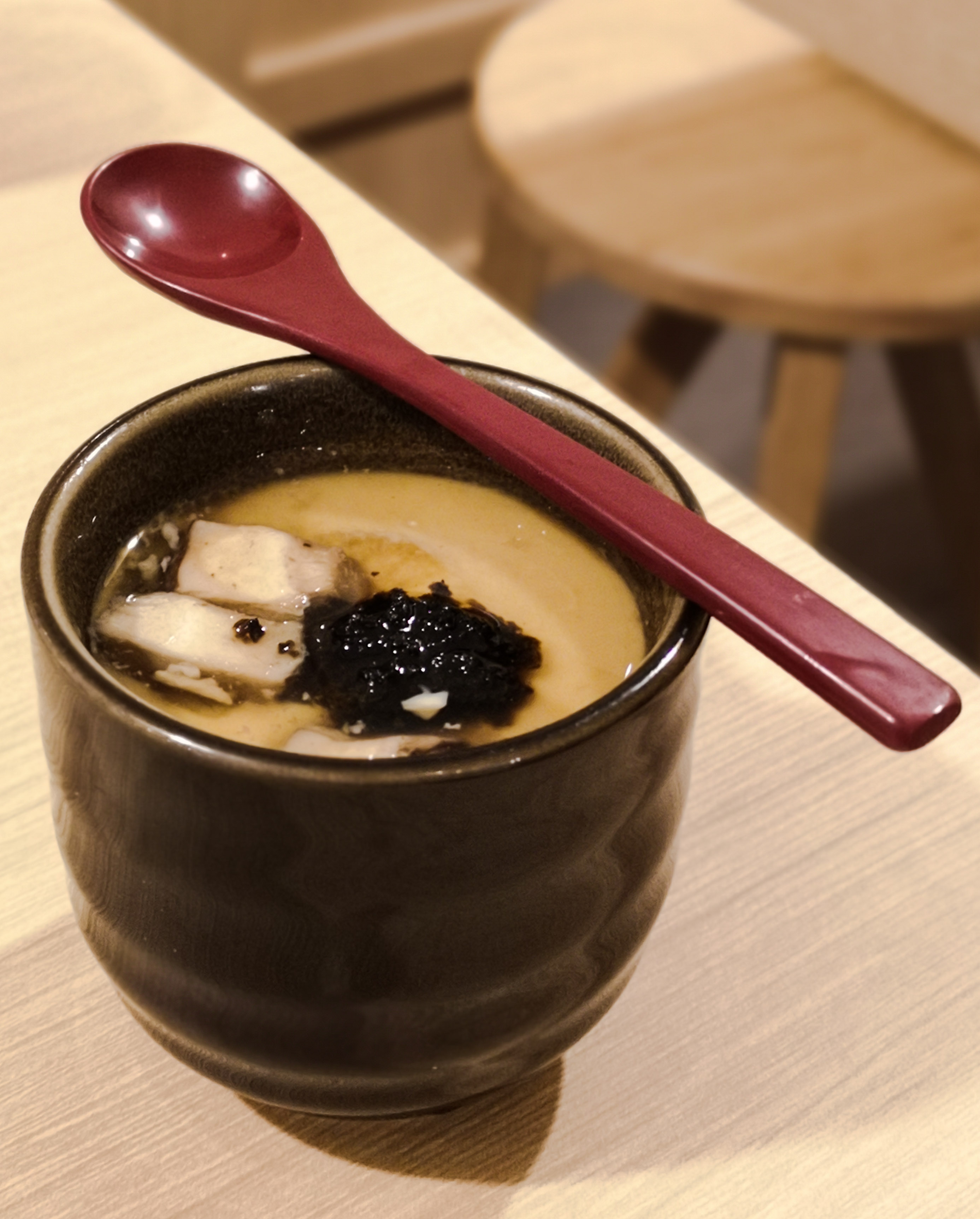 Being an item recommended by the wait staff who had served our table, the Truffle Chawanmushi is an item not to be missed here especially so for those who love truffle and eggs. Whilst carrying that umami note that usually comes from the Dashi included in the preparation of the Japanese steamed egg, the Chawanmushi was no doubt smooth and custard-like; all that whilst also perfuming of an evident hint of truffle which helps to ante up the flavour profile of the entire dish. The addition of chunks of mushroom helps to provide some texture to the Chawanmushi, introducing a bouncy bite that provides a slight textural contrast to the egg; all that whilst also enhancing the earthiness of the Truffle Konbu that is included in the Truffle Chawanmushi here. 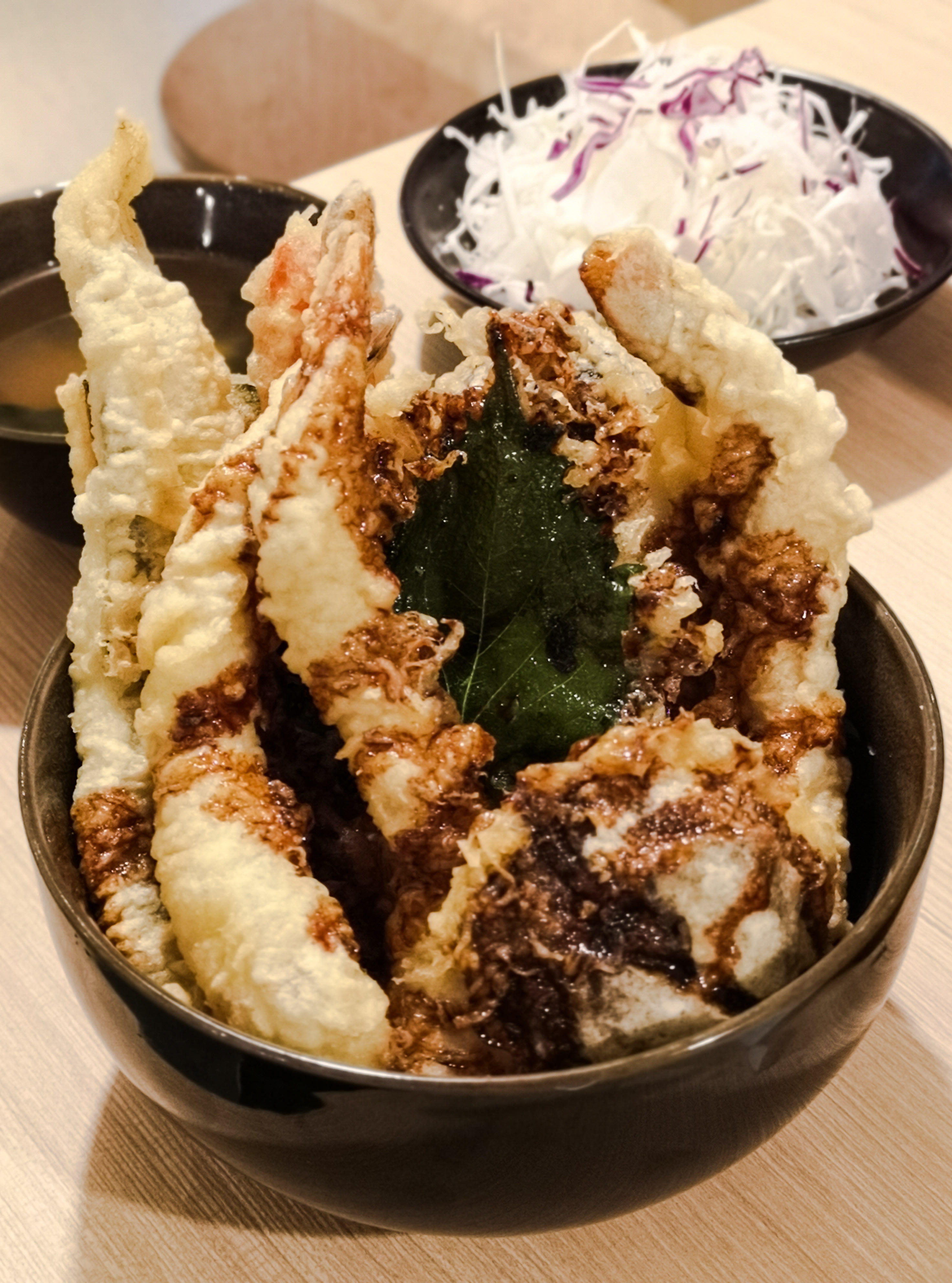 Going for the Toku-Jo; also known as the Premium offering here at Tenjin, the Toku-Jo comes with Tempura items such as Anago, Crab Leg, Prawn, Fish, Vegetables and Freedom Range Egg; the items exclusively served with this bowl being the Fish, Crab Leg, and Anago. All Tendon varieties offered here comes with a choice of spicy or regular Tare sauce, whilst the Tendon also comes standard with Miso Soup and Kyabetsu Salad. Providing a Goma dressing at the table, patrons can add the dressing to their Kyabetsu Salad to their liking; the dressing was not overly thick, but instead carrying a light hint of roasted sesame that helps to provide some moisture to the crunchy vegetables. The Miso Soup also carries a soy-esque earthiness that was rich, but not overpowering with a pretty clean finish. Opting for our Toku-Jo to come with the regular Tare, the Tempura items were well-executed; the batter being light and airy without feeling overwhelming nor greasy; the seafood such as the crab leg and prawn came pretty crisp on the exterior, yet retained their moisture within without being particularly limp nor dry inside. The various vegetables included such as the eggplant, pumpkin and Shiso leaf all provided varying textures to the bowl; the Shiso leaf providing some form of crispness, while the eggplant and pumpkin carried a soft bite. The Shiitake Mushroom also provided a bouncy bite; all encased in a light and crisp Tempura batter. Tucked in the middle of the rice bowl, the Freedom Range Egg is hidden beneath all the other elements in the bowl; fried with a Tempura batter on the exterior, the egg yolk bursts eagerly when poked with the chopsticks, revealing the golden goodness within that is to be mixed with the rice for a silkier texture. Drizzling the fried items and part of the rice with the regular Tare before serving to the table, the Tare carried a light hint of sweet-savouriness that went well with the fluffy, short-grain rice without being excessively drizzled or puddling within the bowl itself. 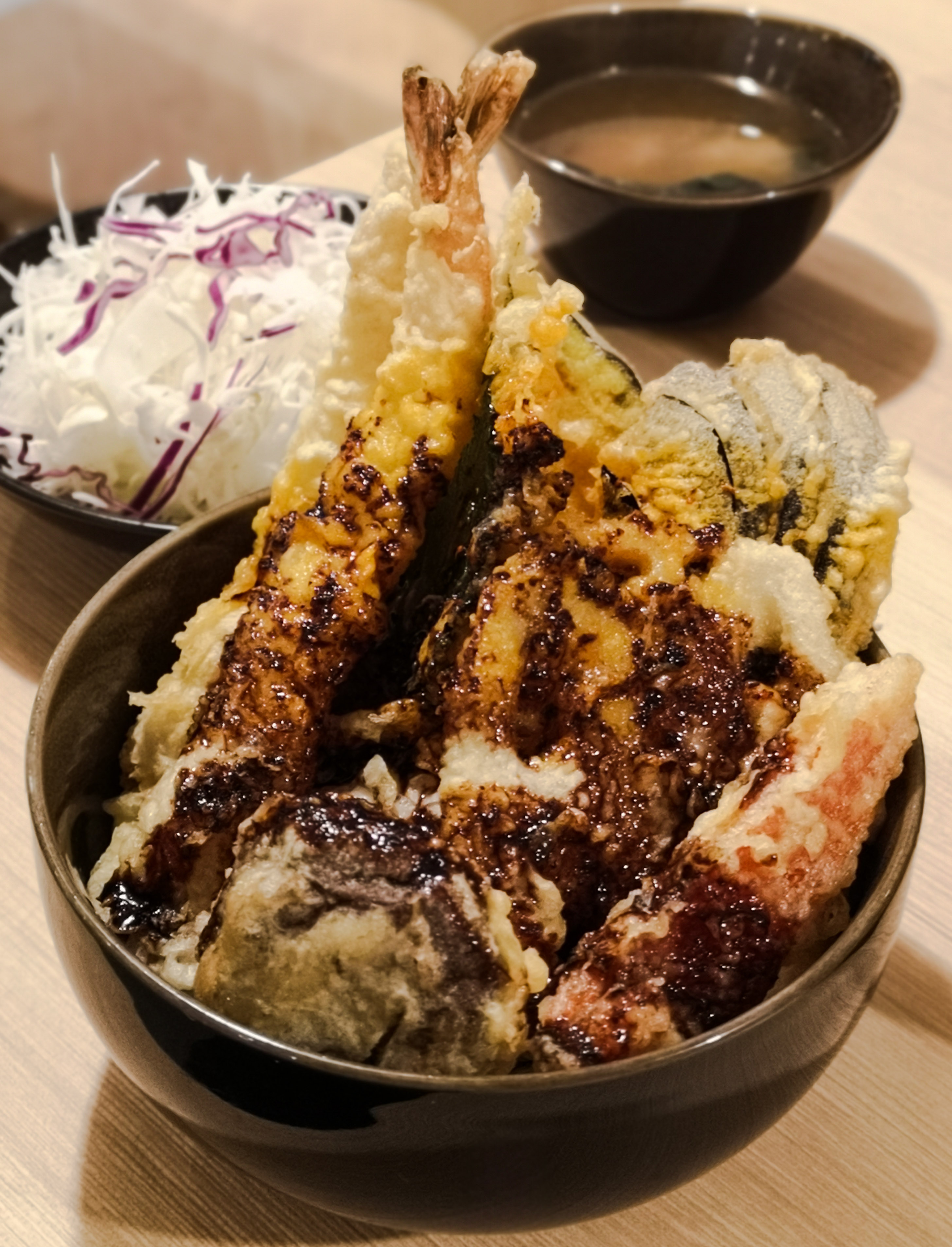 We also went for the Jo; the Special offering which comes with items such as Prawn, Vegetable and Freedom Range Egg. Much like the Toku-Jo, the Tendon also comes with the same Miso Soup and Kyabetsu Salad by the side, as well as the option for opting for either the spicy or regular Tare; we opted for the spicy Tare for our order of the Jo. Featuring much of the same elements as what the Toku-Jo comes with, the Jo was equally satisfying with Tempura items fried to a similar consistency, though lacks the more premium seafood offerings such as the Anago, Crab Leg, and Fish that comes with the Toku-Jo. It is also noted that the spicy Tare carries a slightly heavier hint of savouriness as compared to the regular Tare sauce, though not particularly spicy and should be pretty manageable for those who have a low tolerance for spiciness. Despite being missing of the more premium seafood items, the Jo would work well as an affordable option for those who just want their Tendon cravings fixed without fussing over the selection of tempura pieces that comes with it, considering how the Jo is priced pretty reasonably at $14.80 before taxes and the prevailing charges. 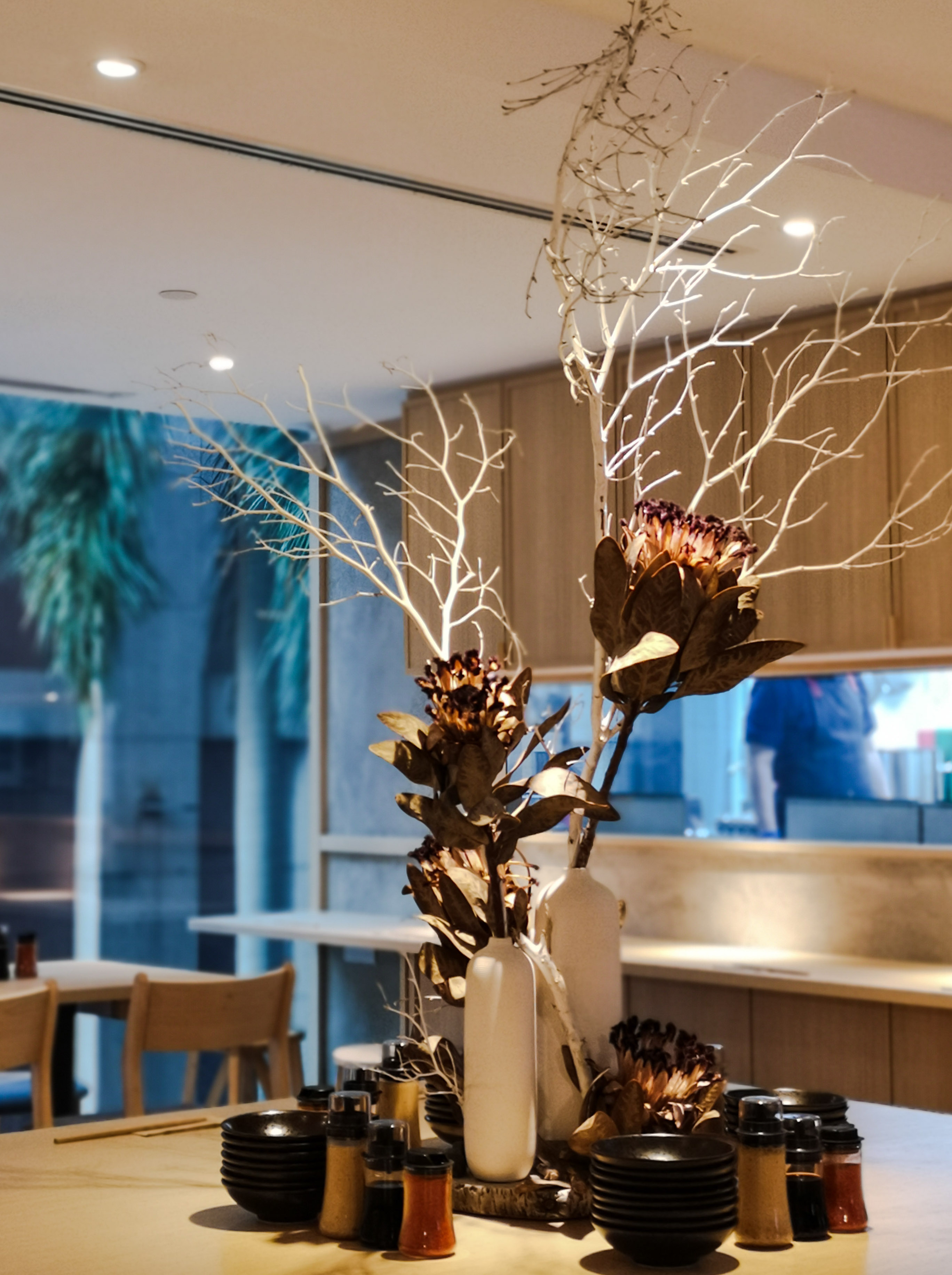 While Tenjin is pretty much late into the Tendon game given how the trend seemed to have since moved on to Brown Sugar Boba and Soft-Serve related items, our meal at Tenjin seems to prove the place to be a pretty quality spot for well-executed Tendons; the fried items were light and crisp, without being particularly greasy nor too heavy, while retaining the freshness and the moisture of all the elements within which is considered a rare feat even despite the many establishments around that tries to serve up pretty much the same dish. Prices are also considered pretty affordable; no doubt the Toku-Jo is set at a steeper price, but the other items such as the Jo and the Yasai (Vegetable) variants come well below S$15 before taxes and prevailing charges; all bundled with Miso Soup and Kyabetsu Salad which not many places might have included. Service was pretty on-point, with service staff being pretty patient and attentive; refilling our cups of tea pretty regularly while the dining environment is pretty conducive for catch-ups and well-decorated. Considering its relatively central location, yet situated away from the buzzier spots along Orchard Road, Tenjin is one of the places that Tendon lovers should add into the list before the crowd comes; we do hope that the food quality would maintain in the long run; a place that we would recommend getting those Tendon cravings fixed without the over-the-top seasonal items nor the excessively long queues just to dine-in, for now …