With the opening of The Poiz Centre at Potong Pasir, a number of new F&B establishments and retail shops have since moved into the shopping mall. 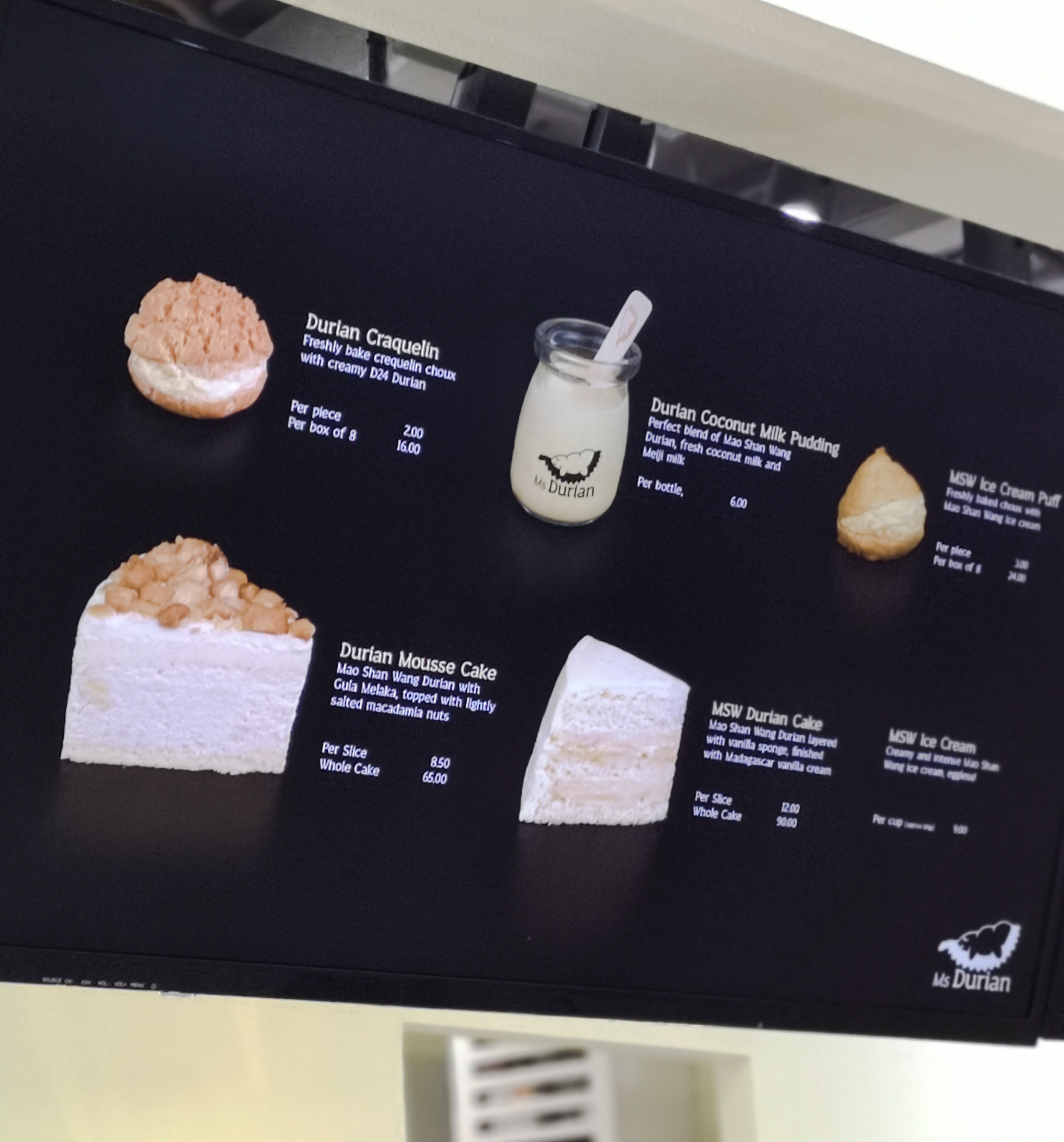 Located at the corner of The Poiz Centre, Ms Durian is a new durian-centric cafe that dedicates itself to serving durian-based desserts. Decked in a rather minimalistic looking space, Ms Durian occupies only a small space in the mall; the interior featuring a sparkly concrete flooring with furnishings in marble and gold accents. Seatings are also pretty comfy, considering how cushioned seats are available for dine-in patrons, which seats eleven pax. Unlike other durian-themed establishments elsewhere, Ms Durian does not serve the fruit itself here, instead choosing to focus on serving ice-cream, cakes and desserts made from the King of Fruits. 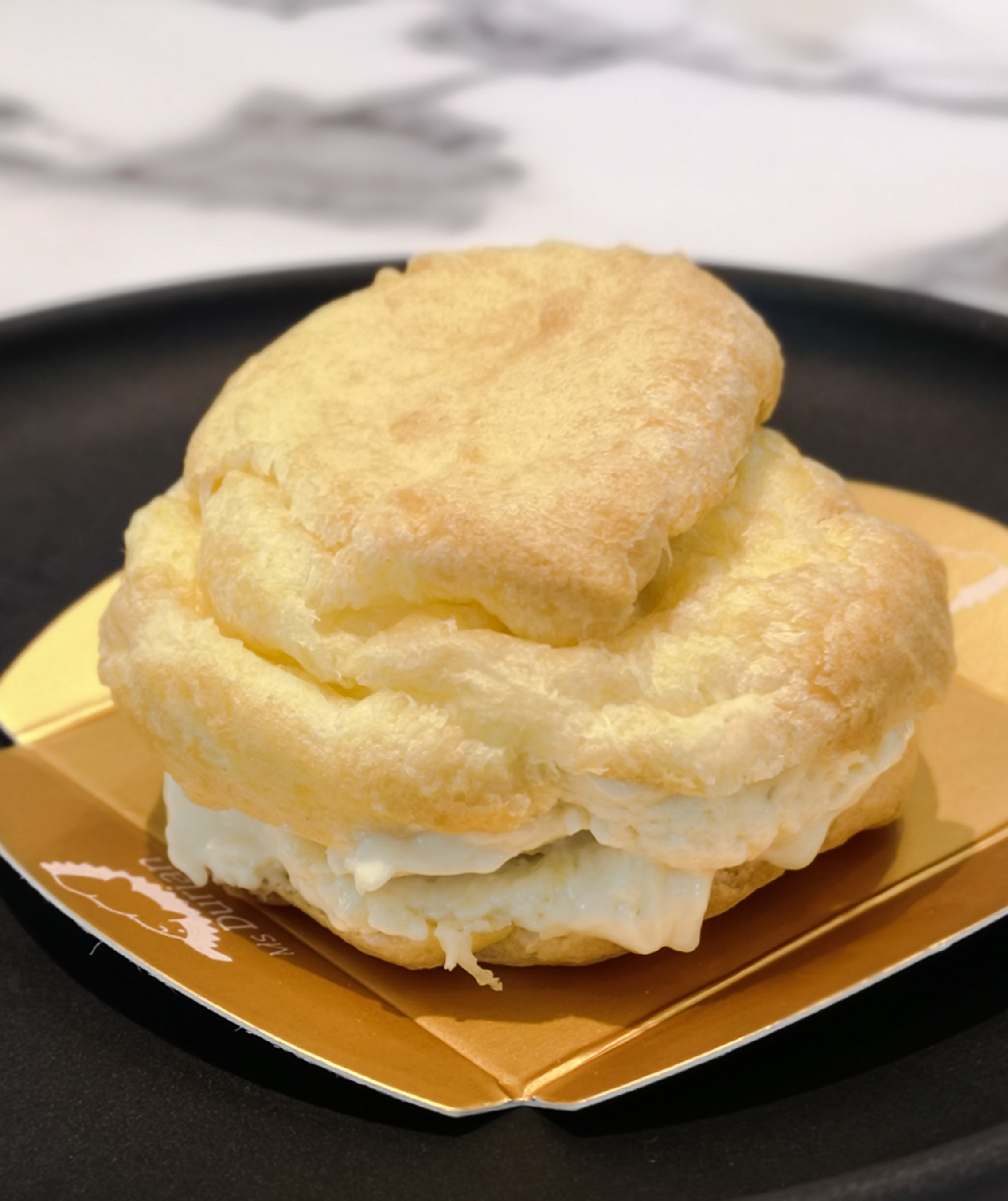 Having tried the ice-cream before ordering the various items available on the menu here, we went for the MSW Ice Cream Puff which features the same ice-cream sandwiched between puff pastry. Freshly baked in-house, the pastry was light, airy and spongy whilst the ice-cream was rich, smooth and came with a pungent aroma of the King of Fruits — a winner for those who love their durian desserts to be on the heavier end. For those who are interested to order the ice-cream as-is, the ice-cream is also available in ala-carte as well. 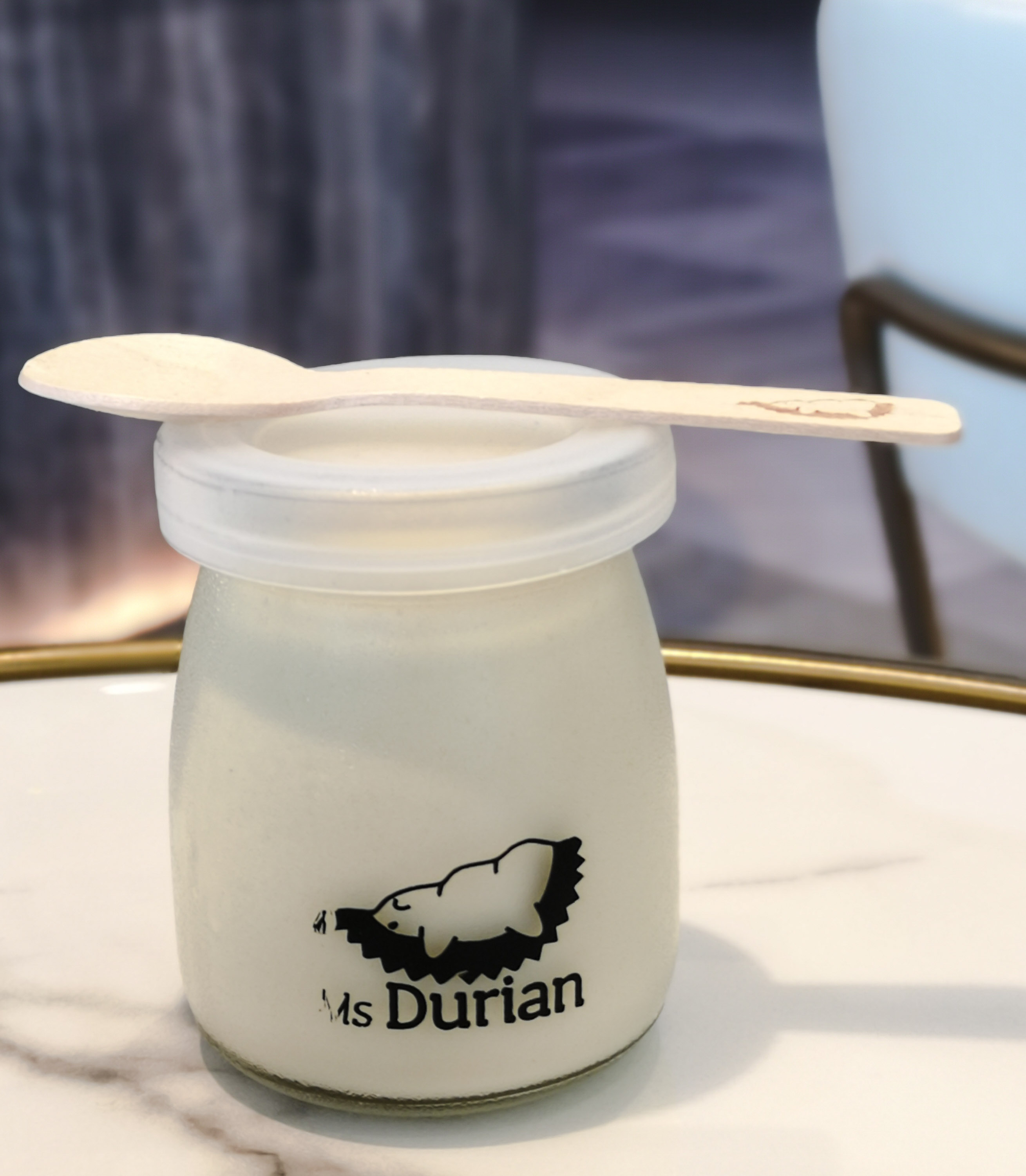 We also tried the Durian Coconut Milk Pudding which comes served in its own small jar. Using a mix of coconut milk and Meiji milk as the base, the coconut milk seemingly helped to enhance the flavours of the pudding with its richness, whilst still being creamy and velvety smooth. Intended to carry a slightly lighter flavour of durian to balance out the flavours of the milk base, the Durian Coconut Milk Pudding still carries an evident hint of the King of Fruits, which would appease the die-hard durian lover. 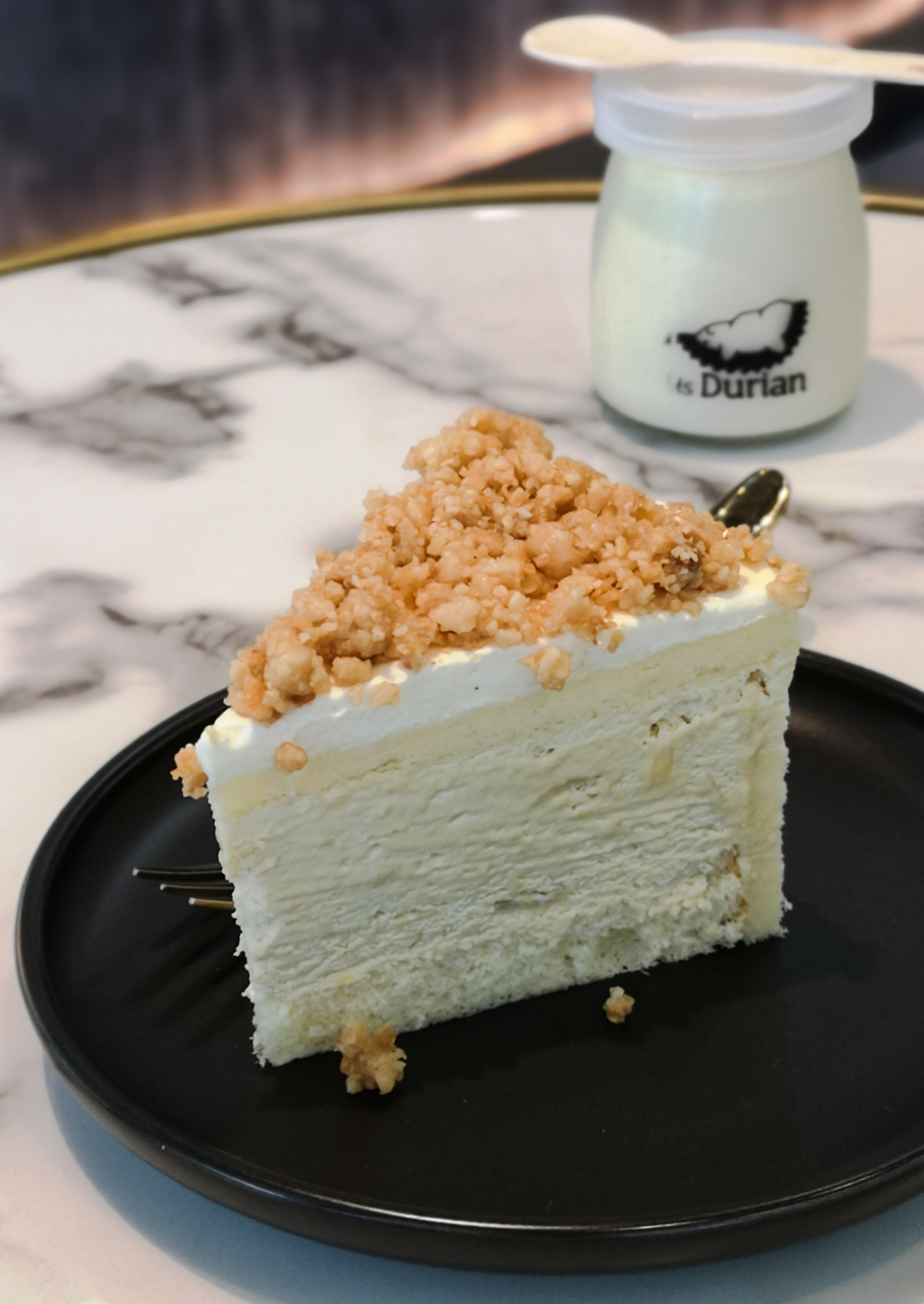 Another item which piqued our interest was the Durian Mousse Cake; one of the two cakes that are being served at Ms Durian. Being the lighter of the two, the staff behind the counter informed us that the MSW Durian Cake would be the cake for those who love their durian cakes to come with a punchier aroma of durian; the MSW Durian Cake is priced slightly steeper at S$12.00 against the S$8.50 for the Durian Mousse Cake, and each whole MSW Durian Cake is being made from an entire Mao Shan Wang Durian. The Durian Mousse Cake features elements such as Gula Melaka, Macadamia Nuts and Vanilla Sponge. The Durian Mousse Cake would fit those who prefer lighter-tasting Durian desserts, or for those who prefer light cream cakes rather than a cake that features more sponge cake layers. The Durian Mousse itself was light and smooth, carrying an evident hint of durian without overwhelming the taste buds, while the vanilla sponge helps to give it a contrasting hint of sweetness that helps to neutralise the pungency of the durian, yet providing a fluffy, cake-esque texture. The slightly salted macadamia nuts laced in Gula Melaka helped to add some crunch to the cake, whilst adding a flavour almost akin to salted caramel; pretty smart use of various elements to replicate a classic flavour that suits the cake pretty well. 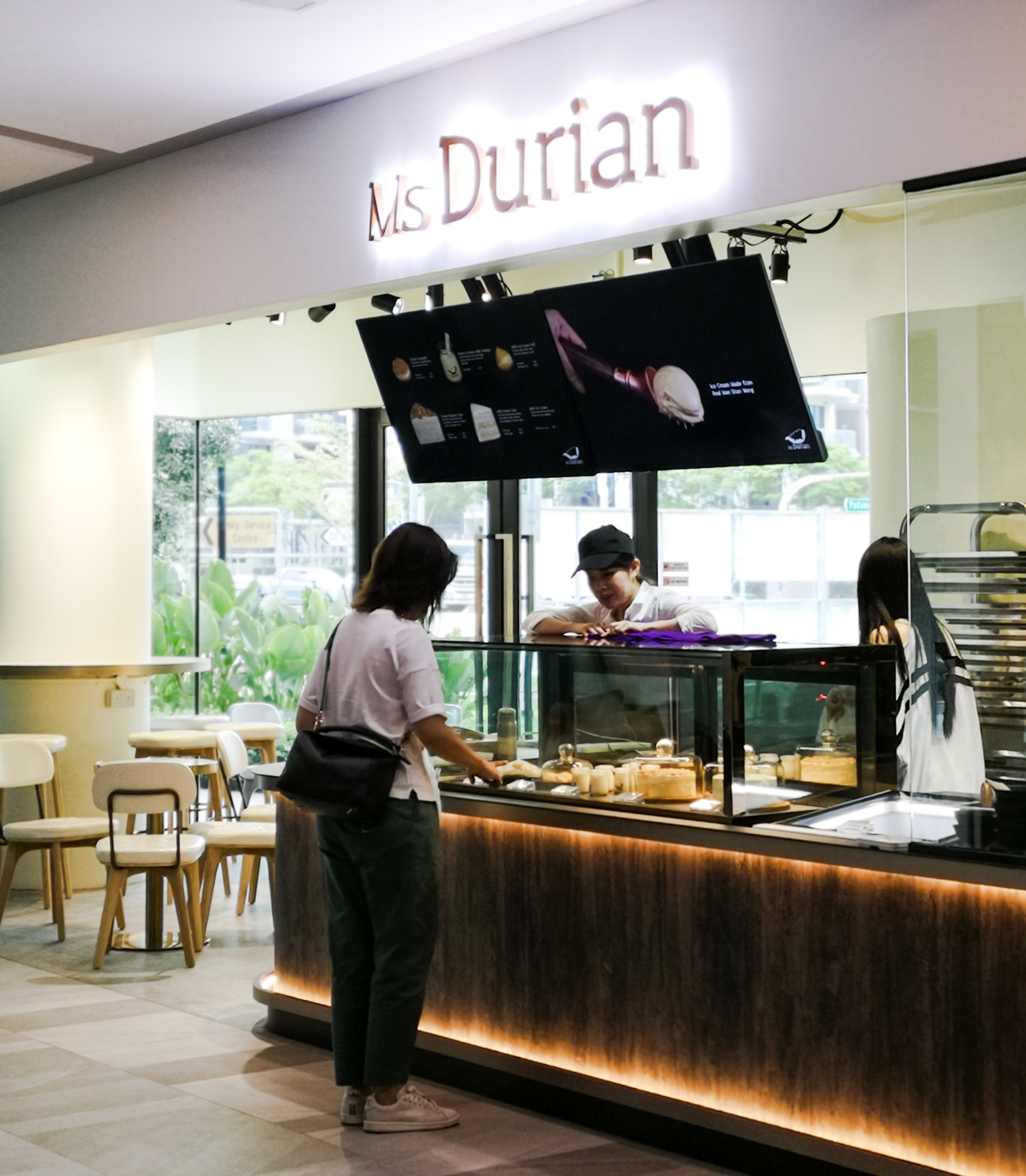 Given its concept, Ms Durian is a spot that seems to differ from the other durian-centric establishments that had sprouted all over the island a couple of years ago. One of the distinct difference is how Ms Durian does not sell the fruit itself; many other durian-centric establishments do serve the fruit itself, together with other durian-based desserts or beverages alongside. While this may be a missed opportunity to some, we appreciate how Ms Durian is poised to be more of a cafe than a fruit stall-cum-cafe concept; does keep the store from reeking too heavily of the fruit (something that may also be of concern to the building’s developer given Ms Durian’s set-up) due to the lack of ventilation, whilst being a concept that provides patrons a choice where it comes to dessert options. Having tried the various items that Ms Durian serves up, we enjoyed their various items which seemingly carried pretty evident flavours of the King of Fruits; a place that Durian-lovers would certainly enjoy given their innovative and clean presentation, as well as refined flavours of their desserts as compared to the usual cheesy and pretentious aesthetics of such desserts. Considering the quality of their desserts, we would certainly be back for more in the future as well; we are keeping our eyes on their Durian Craquelin next, something which we would keep in our minds for our love of Craquelin choux pastries. We wish the folks behind Ms Durian all the best in what is to come in the future!