Taking over the former premises of now-defunct Nekkid is BurgerLabo, a new concept by the folks behind The Naked Finn. 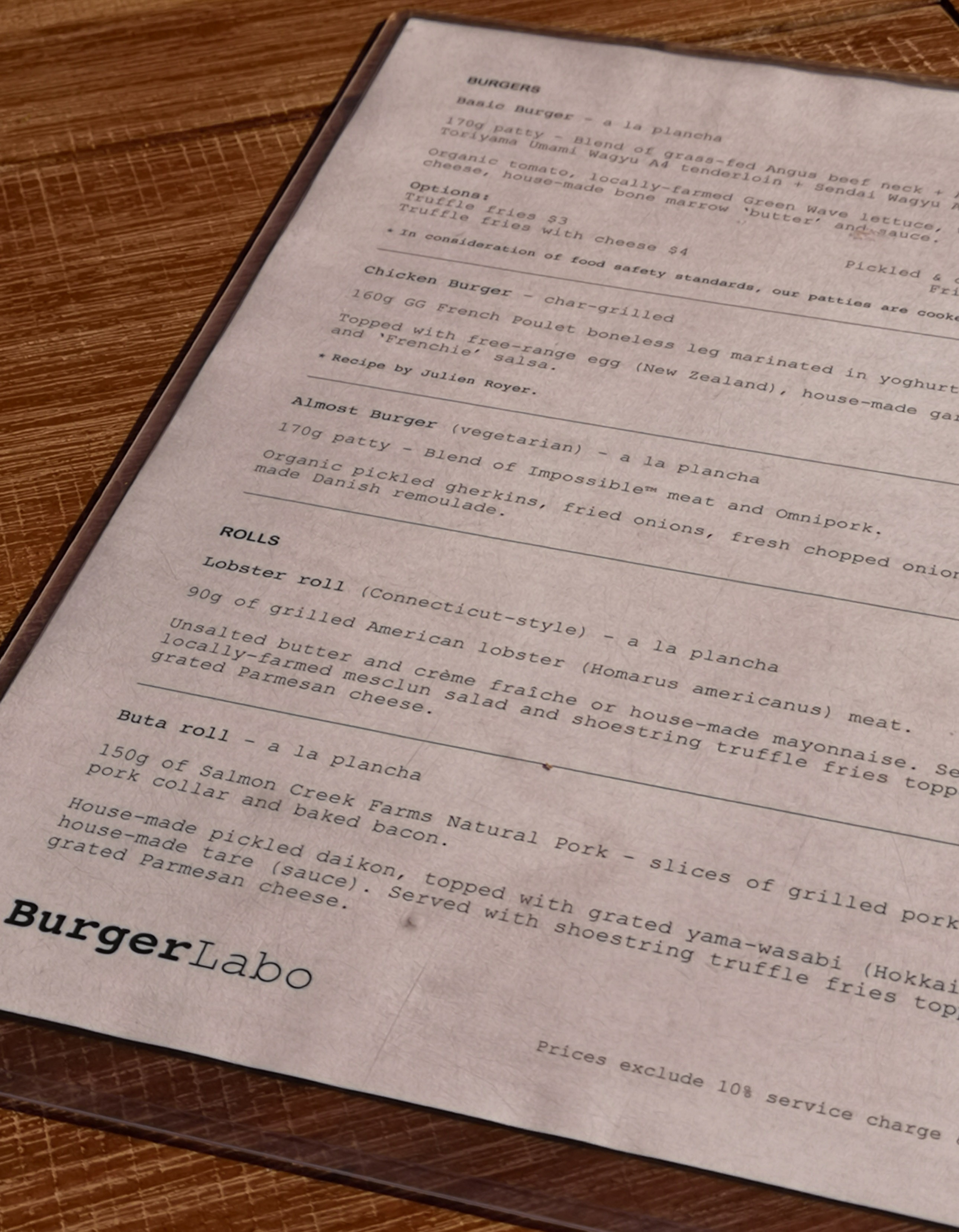 Still operated by the folks who brought us The Naked Finn (as well as Nekkid), BurgerLabo is their newest concept, which places an emphasis on big meats and burgers. Utilizing the space formerly occupied by Nekkid, BurgerLabo is located at Malan Road within Gillman Barracks, the bar-cum-diner concept features a well-lit interior with natural lighting during the late afternoon with its large glass window which pretty much surrounds the main dining hall. The bar counter occupies the far end of the space, with the kitchen being situated behind the bar counter. The interior is chic and modern; featuring furnishings which carries slate and wooden accents which gives it a simple, yet stylish look. As mentioned earlier, the menu at BurgerLabo mainly focuses on their burger offerings, though also serves stuffed bread rolls as well as big meats with a small selection of sides; BurgerLabo also offers a wide variety of beverages, though mostly alcoholic options, as well as a small list of desserts at the end of the beverages menu. 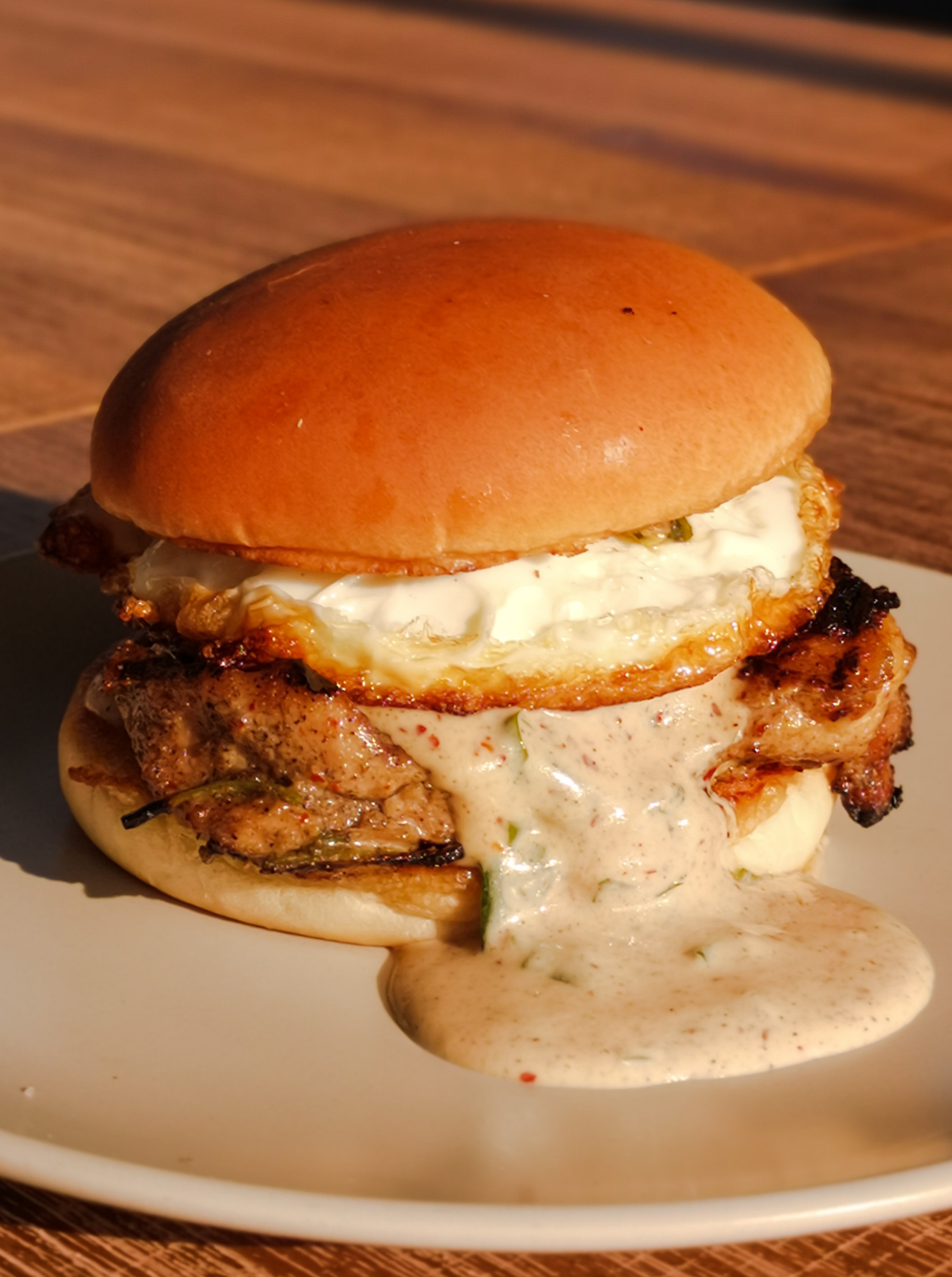 Despite the Basic Burger being the item to go for here at BurgerLabo, we found ourselves ordering the Chicken Burger. All burgers on the menu of BurgerLabo comes as a stand-alone item, without any sides such as fries or garden salad that accompanies the burger; those who wish to do so would have to order the sides ala-carte. The Chicken Burger here is developed using a recipe by Chef Julien Royers, who is the chef and co-owner of two Michelin-starred Odette which also recently came to the number 1 spot of the Asia’s 50 Best Restaurants 2019. Featuring elements such as the free-range egg, house-made garlic yoghurt sauce and “Frenchie” Salsa, all with a 160gm GG French Poulet boneless leg in between two buttered and grilled buns. Sinking our teeth into the burger, it is noted that the buns were light and fluffy; not too heavy nor carby. It is also difficult not to notice how the grilled chicken leg was so perfectly executed; the chicken leg carrying a smoky flavour from the grilling, yet still pretty juicy and succulent whilst also seemingly tasted of a hint of turmeric (?) used in the marination process. The main driver of the burger was seemingly the house-made garlic yoghurt sauce; the sauce provided an umami note whilst carrying a slight savouriness, both of which came together as a flavour that complimented the other elements well without being overwhelming, yet also giving a creamy texture in between the different elements. The fried egg was executed well; crisp around the edges, the egg white was fluffy, while the yolk was eager to burst with a poke of the fork, oozing of the golden goodness within that laces all the elements together as well. “Frenchie” Salsa helps to cut through the heaviness of the burger, providing a refreshing crunch with every bite. While some burgers from other establishments may be hard to understand with the over-complication of condiments to create a fusion dish, the Chicken Burger is simple and fuss-free. Sure, it does come with elements that are seemingly more “artisan” in writing, but the Chicken Burger was an item that was simple to understand and pretty straightforward with its flavour and textures; no-frills, and refined, it is simply a pleasure without being excessive in portion or in terms of components. 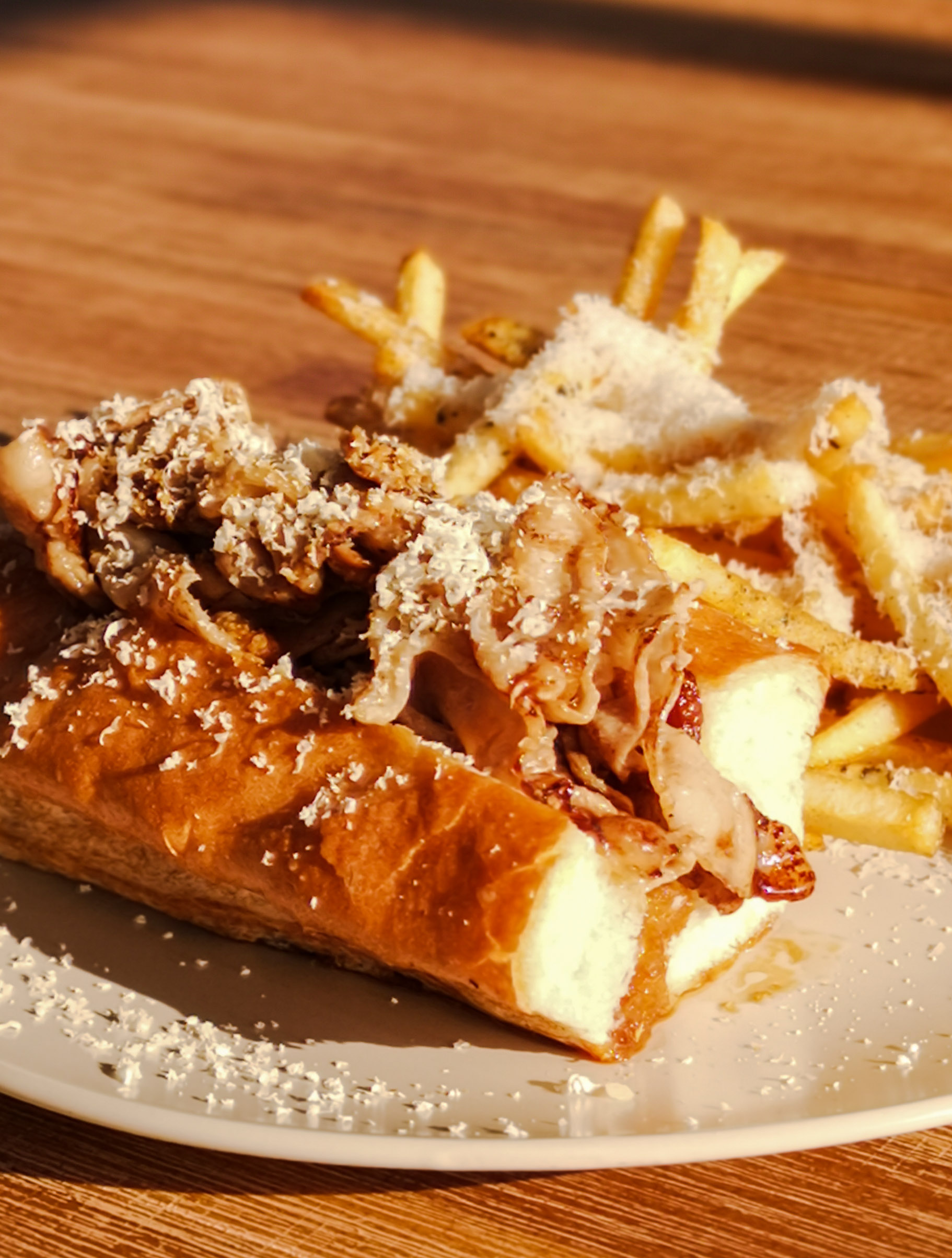 Given that we had already ordered a burger, we thought it would also be good to give the Buta Roll a try. Essentially slices of grilled pork belly and pork collar stuffed in a bread roll with baked bacon, the item also features elements such as grated yama-wasabi and house-made tare. Unlike the Chicken Burger, both items from the “Roll” section of the menu comes accompanied with shoestring truffle fries topped with grated Parmesan cheese. Taking a bite into the roll, one would be able to notice the light, buttered roll that was not too heavy nor carb-laden as well; the texture being almost similar to that of the burger bun served with the Chicken Burger. The slices of grilled pork belly and pork collar were also juicy and tender without being tough to chew; all seemingly sauteed with a lightly savoury sauce that gives it a pretty refined flavour that does not cloud the taste buds, yet pretty evident. The bacon helps to bring the meatiness of the Buta Roll further with its smoky and saltishness that is typical of cured meat, which was not overwhelmingly so. The fries on the side were also pretty addictive; while most places serve truffle fries that lacks a balance of flavours (either too heavy on truffle, or the truffle being non-existent), the fries that accompanied the Buta Roll came with a slight hint of truffle which was well complimented with the cheesiness of shredded parmesan that is a classic combination for a well-executed variant of truffle fries. 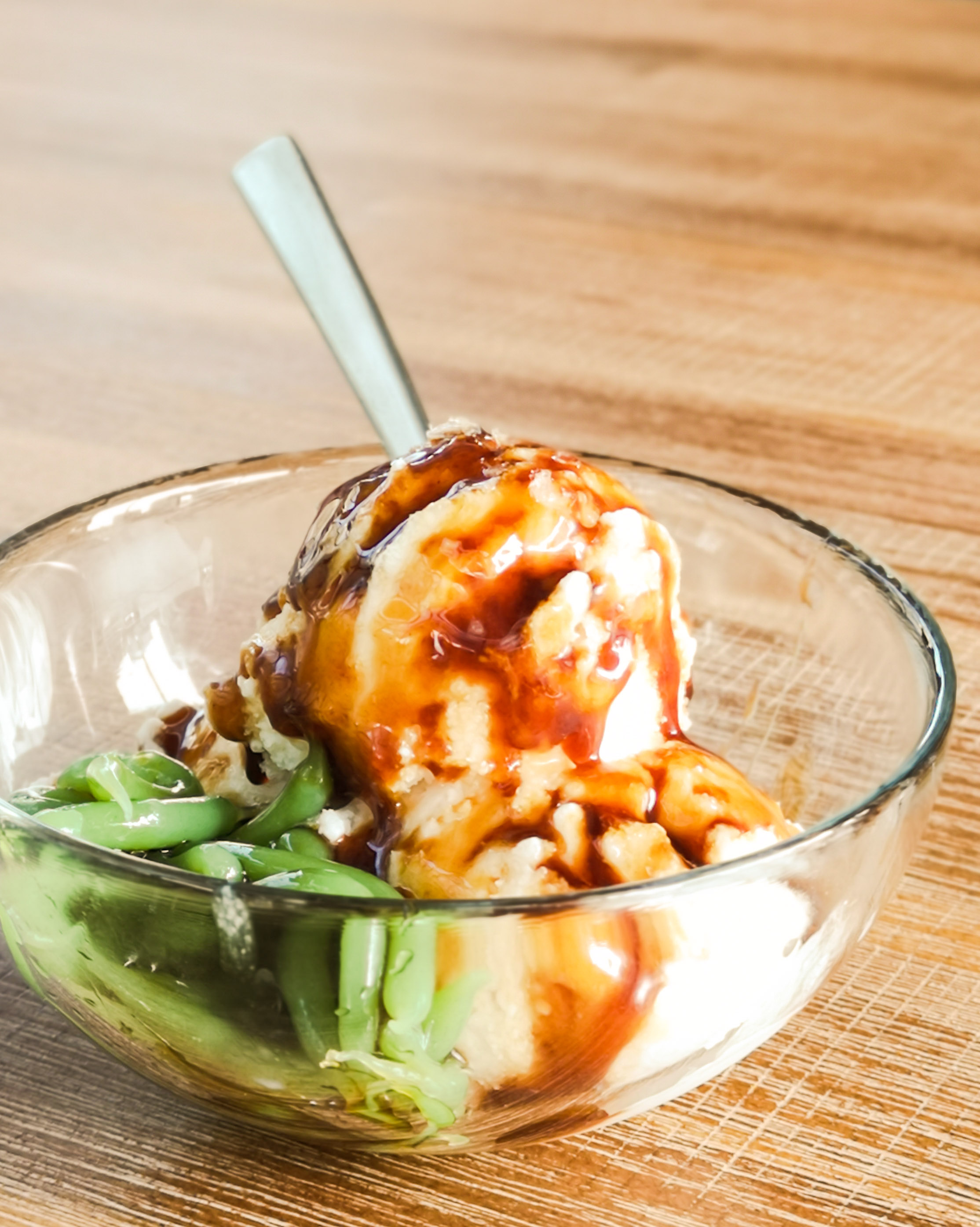 We have not gone to The Naked Finn prior to our visit to Burger Labo, but the House-made Naked Chendol was an item that caught our attention pretty early on whilst skimming through the dessert and beverage menu. A variant that is served with their very own twist, the House-made Naked Chendol features scoops of coconut sorbet drenched in Gula Melaka, all with Pandan jelly by the side. Digging into the House-made Naked Chendol, the first thing which hits the taste buds is the richness of the thick and gooey Gula Melaka; a deep sweetness that is luscious yet not cloying, which was the perfect accompaniment to the coconut sorbet that carried a light hint of savouriness akin to that of coconut water. The Pandan Jelly perfumes of a distinct, yet light Pandan aroma that seems to suggest that it is being made in-house; a rarity considering how pandan jelly are usually mass-produced or commercially made which lacks flavour and are coloured green artificially. An absolutely delicious variant of the Chendol that is worth its price, considering the attention to details and effort behind the elements going into the dessert, and something we would crave for again. 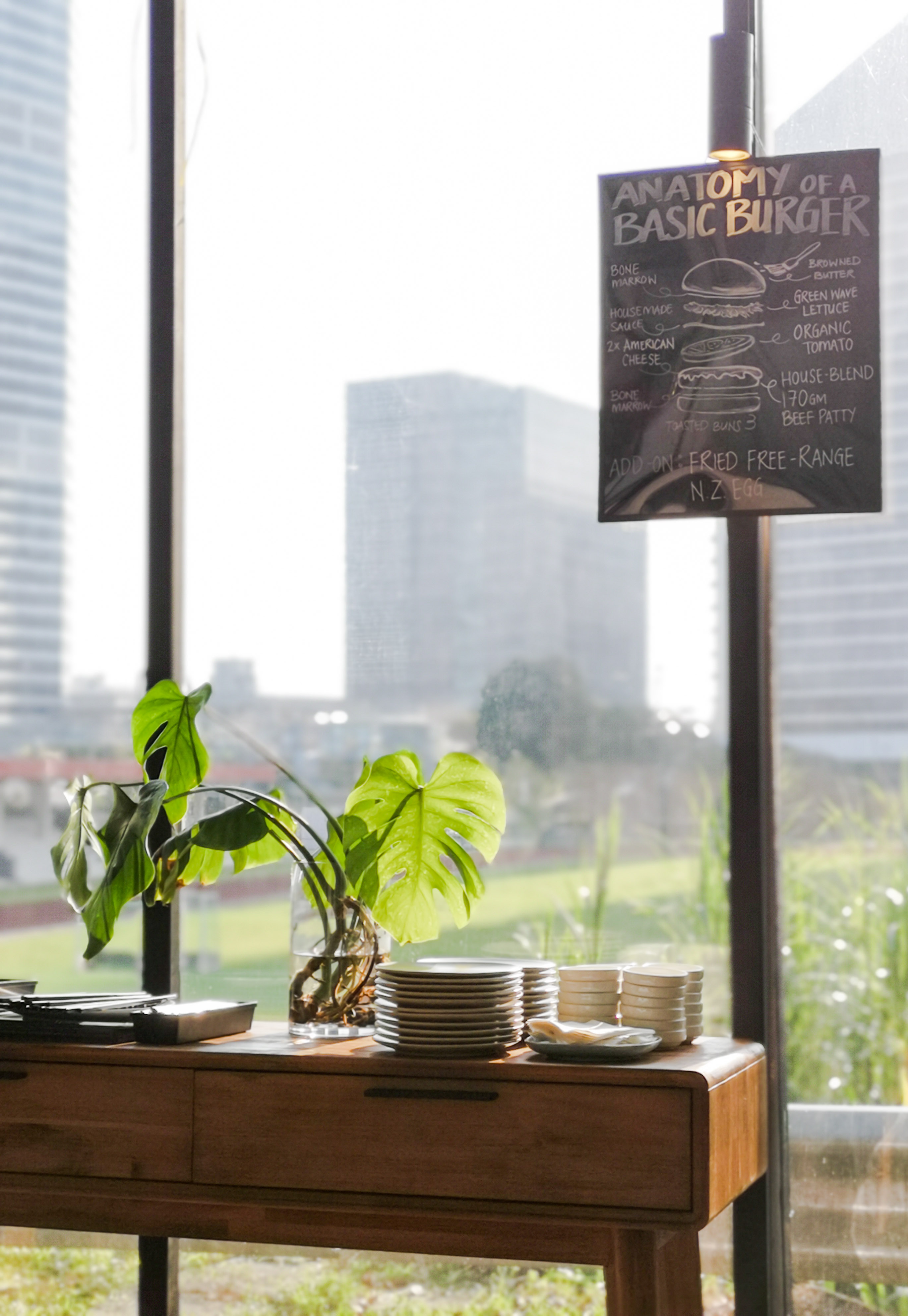 Considering how we had visited BurgerLabo without trying out what The Naked Finn and now-defunct Nekkid has to offer, our visit to BurgerLabo actually got us pretty interested in trying out The Naked Finn, which is best known for their upscale renditions of the humble local cuisine. We were really impressed with the meal, be it in terms of food and service; one could definitely feel the heart and soul going into the design of the menu items here, with tested and proven recipes that are perpetually flawless, whilst showcasing the use of upscale ingredients and house-made elements that is easy to understand even for the average taste bud. Service was also pretty excellent; we made our visit during a Saturday evening when Burger Labo was only opened for limited hours due to a private event in the middle of their evening service, and at no point did we felt rushed or unwelcomed with the staff still being pretty patient as well. With its price range set on the higher end of the scale, BurgerLabo would not be the everyday spot to hit for burger lovers; that being said, it would still work well for those who are looking for a spot that serves good burgers to treat themselves to once in a while every few months. Considering our experience at Burger Labo, it would certainly be a spot that foodies would be hitting to solve their burger cravings; given its limited seatings, let’s just say it would perhaps be an uncovered gem in time to come.