Given how saturated the cafe scene is Singapore is, it is places like Kafe UTU that really stands out. 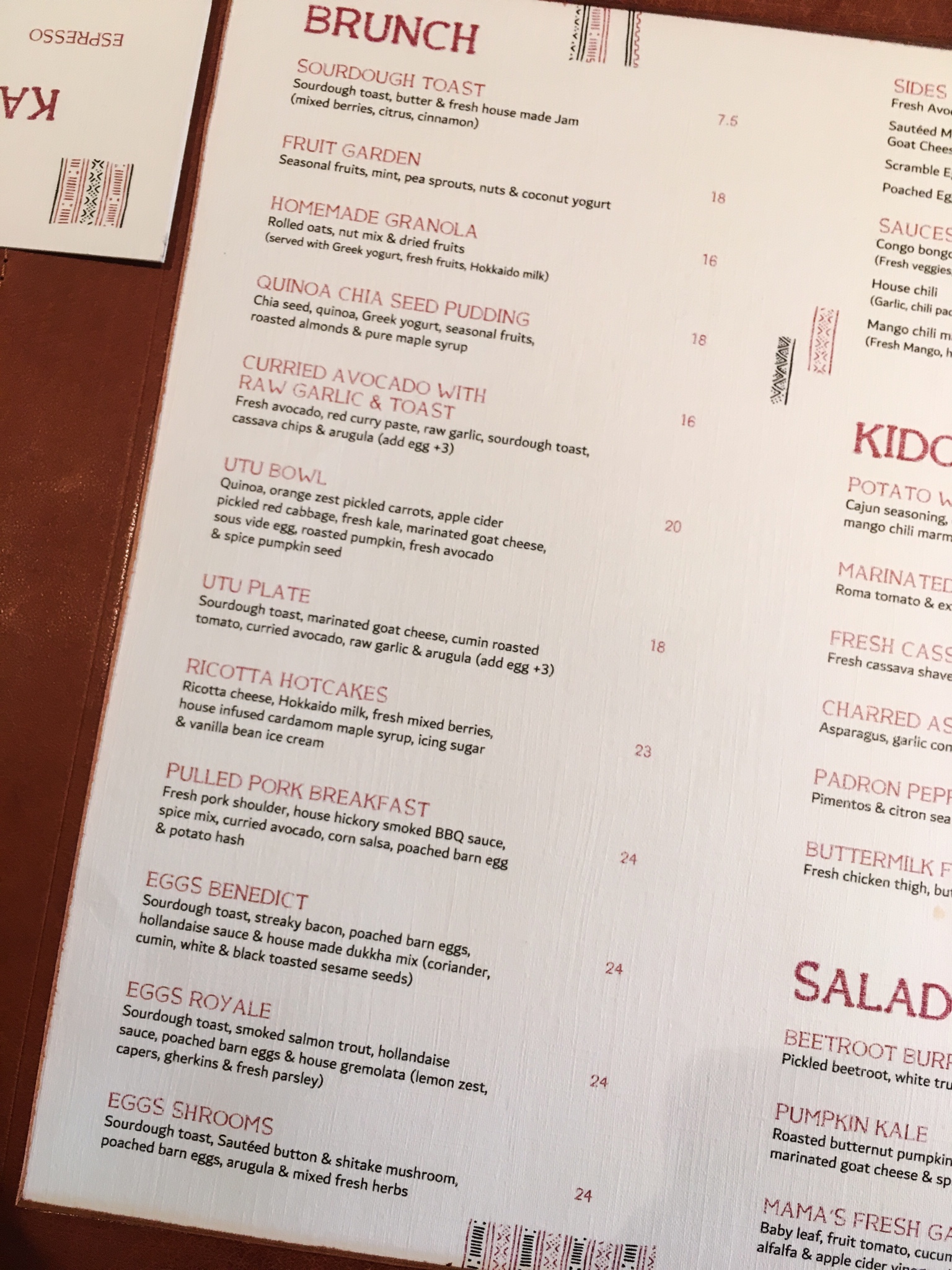 Situated around the Keong Saik neighbourhood in Outram Park, Kafe UTU is a new cafe and bar concept (operating as UTU Lounge in the evening) that is located along Jiak Chuan Road near where now-defunct .elia used to occupy. Dubbed as Singapore’s first Afro-themed cafe, Kafe UTU is a spot that is quite unlike the usual third-wave coffee movement coffeehouses that one finds in this part of town. Spotting the cafe right at the street where it is at, Kafe UTU bears a red shop-front; the cafe occupying the ground level while the bar operations are through the side door where a staircase leads the patrons to the higher levels of the shophouse. Walking into Kafe UTU, one cannot deny the African influence in its design theme; almost a tribal, yet chic design theme that is not overly raw, with a touch of industrial elements from the metallic fittings and the cement-esque table tops that the space is adorned with. Visiting Kafe UTU during brunch hours, the menu split into various sections; one being dedicated to brunch items, while the menu also features sides and salads as well. Those who are looking for something more unique or substantial can also opt to go for items off their “From Mama Africa” section of the menu, and sweet tooths would be able to go for the various desserts made available in the menu as well. Whilst offering a wide variety of beverages, Kafe UTU is possibly one of the few specialty coffee places that offer quite a wide variety of unique concoctions where specialty coffee is concerned, with items such as the Bido Bado (UTU-style Mocha featuring peanut butter and peppercorn around the cup’s rim) having a place in the menu.

Going for a brunch plate to share, we went for the Ricotta Hotcakes; an item which was popularised way back in Singapore by the likes of Paddy Hills and Curious Palette, drawing inspiration from specialty coffee joints in Australia that is always highly instagrammable given its pretty aesthetics. The variant that is served at Kafe UTU comes with elements such as Ricotta Cheese, Hokkaido Milk, Fresh Mixed Berries, Cardamom Maple Syrup, Icing Sugar and Vanilla Bean Ice-Cream. No doubt pretty looking, the Kafe UTU variant is also one which we found to be executed to near perfection. There is, without a doubt, a slight hint of savoury cheesiness from the ricotta that makes the hotcake carry a slight umami note, while the hotcakes were light and fluffy within without being particularly cakey in its texture; the exterior being lightly crusted which enhances the texture of the hotcakes overall. The Cardmom Maple Syrup, which is made in-house, carries just slight hint of sweetness; not overbearingly saccharine, adding a contrast of flavour to the entire dish while the berries carried a slight zing that tingles the taste buds. Overall, one of the better variants of the Ricotta Hotcakes around; not only just looking the part, but also taste the part. 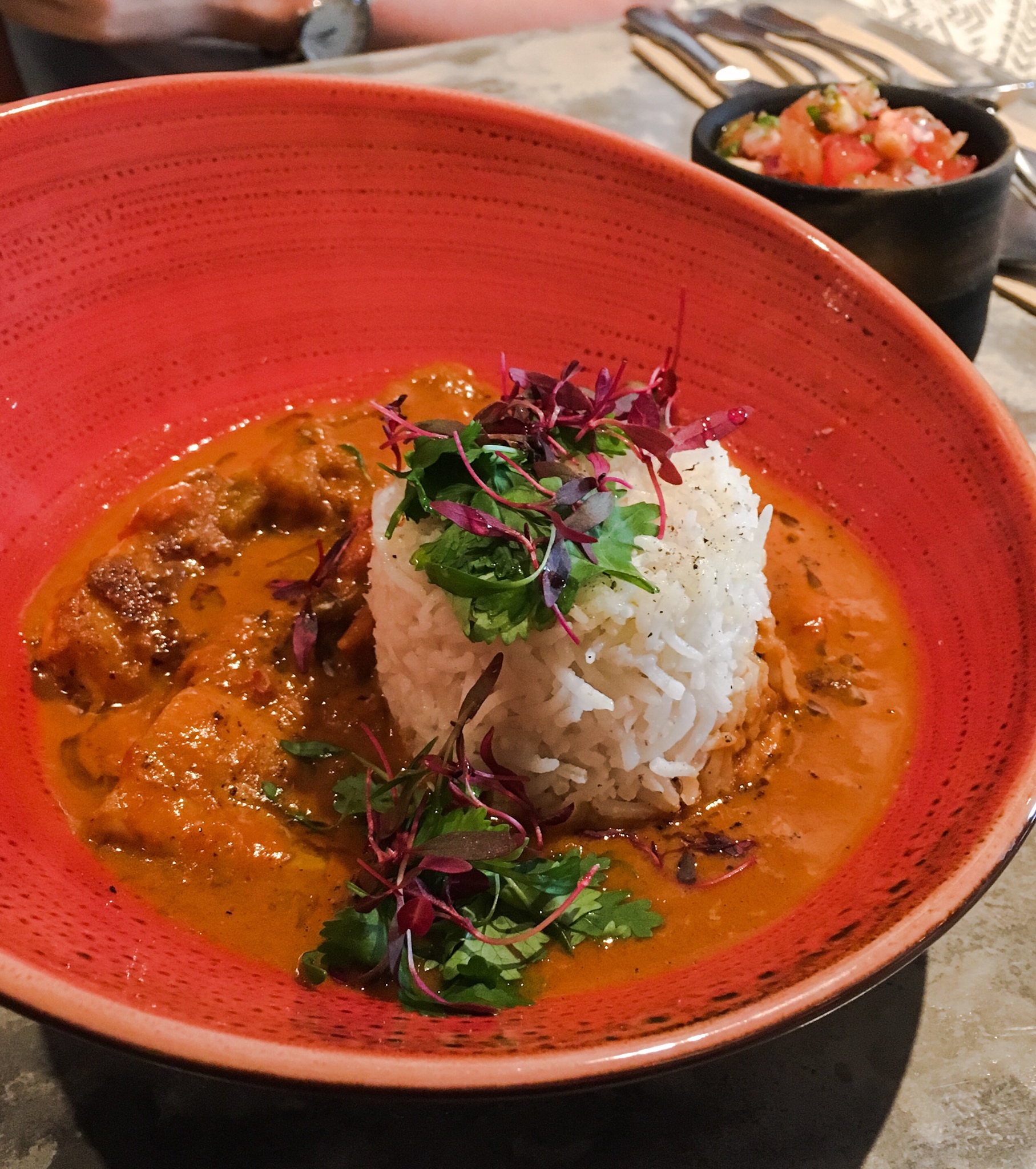 We also went for an item from the “From Mama Africa” section of the menu, which features dishes with heavy African influence. The Swahili Fish Curry is an African dish, featuring red snapper fillet, tamarind, coconut milk, house curry paste, and habanero; the item also comes with coconut rice by default and is also served with a portion of house-made salsa on the side to be enjoyed with the curry gravy. Expecting it to be a rather familiar tasting curry, the Swahili Fish Curry is pretty much unlike any Indian or Chinese curry that we are all familiar with locally; instead, the curry packs a punch with the turmeric being used, whilst being thick, rich and creamy without over-reliance of coconut milk to thicken things up, while the habanero adds that fiery kick that tingles the taste buds even for those who are able to withstand moderate levels of spiciness. The curry also carried a distinct sweetness and tanginess; really flavourful and works well with the zesty salsa for a burst of flavours that is both zingy and refreshing at the same time. For the ease of eating, red snapper fillet is used; boneless while coming with quite a generous portion of flesh enough to go around the long-grained rice. A really comforting item to have, and an item that is really unique to Kafe UTU that gives Kafe UTU its character without being outlandish or overly bold for those who prefer to have a safer item without having to resort to order the usuals. 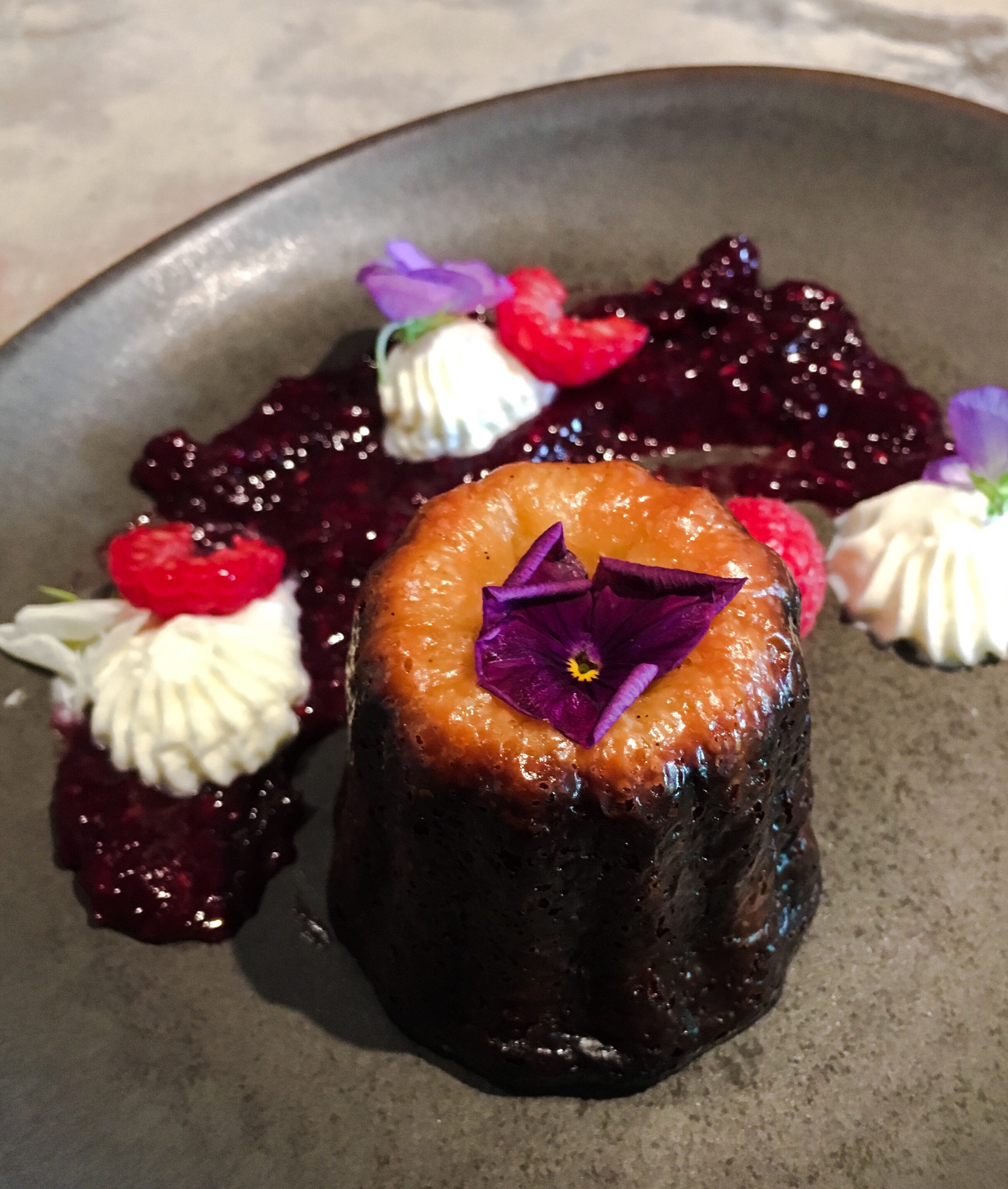 Ordering the Canele to share, the Canele comes plated prettily with a few embellishments on the side. The Canele is decent here; despite lacking the crispy crust on the exterior, the Canele is soft and pillowy on the inside and kueh-like, carrying an evident hint of sweetness with a slight booziness. Pretty enjoyable nonetheless. 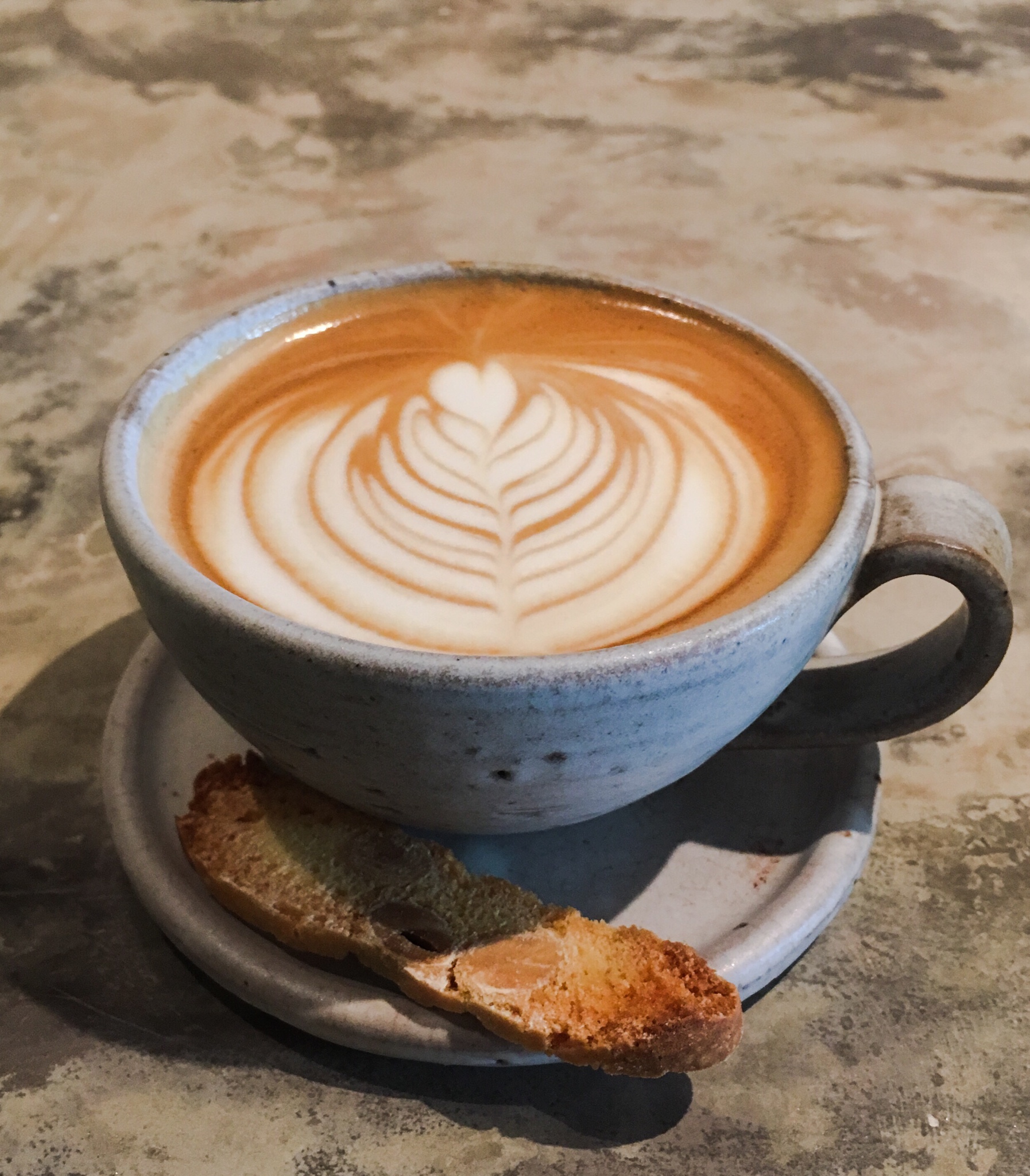 Having noticed the extensive list of unique specialty coffee options they have on the menu, we went for the Malindi Latte; a concoction that sees Chai-like spices infused with the typical cup of Latte from specialty coffee shops. Roasting their own blend of beans, the blend of Uganda, Brazil and Mexico beans is also dubbed the Ubuntu blend; an earthy and nutty cuppa which goes very well with the Chai-esque notes that the Malindi Latte was intended to bring across. A rather unique concoction that sees a new take to specialty coffee, and something which we would most likely order during our next visit here considering how we could not get enough of it. 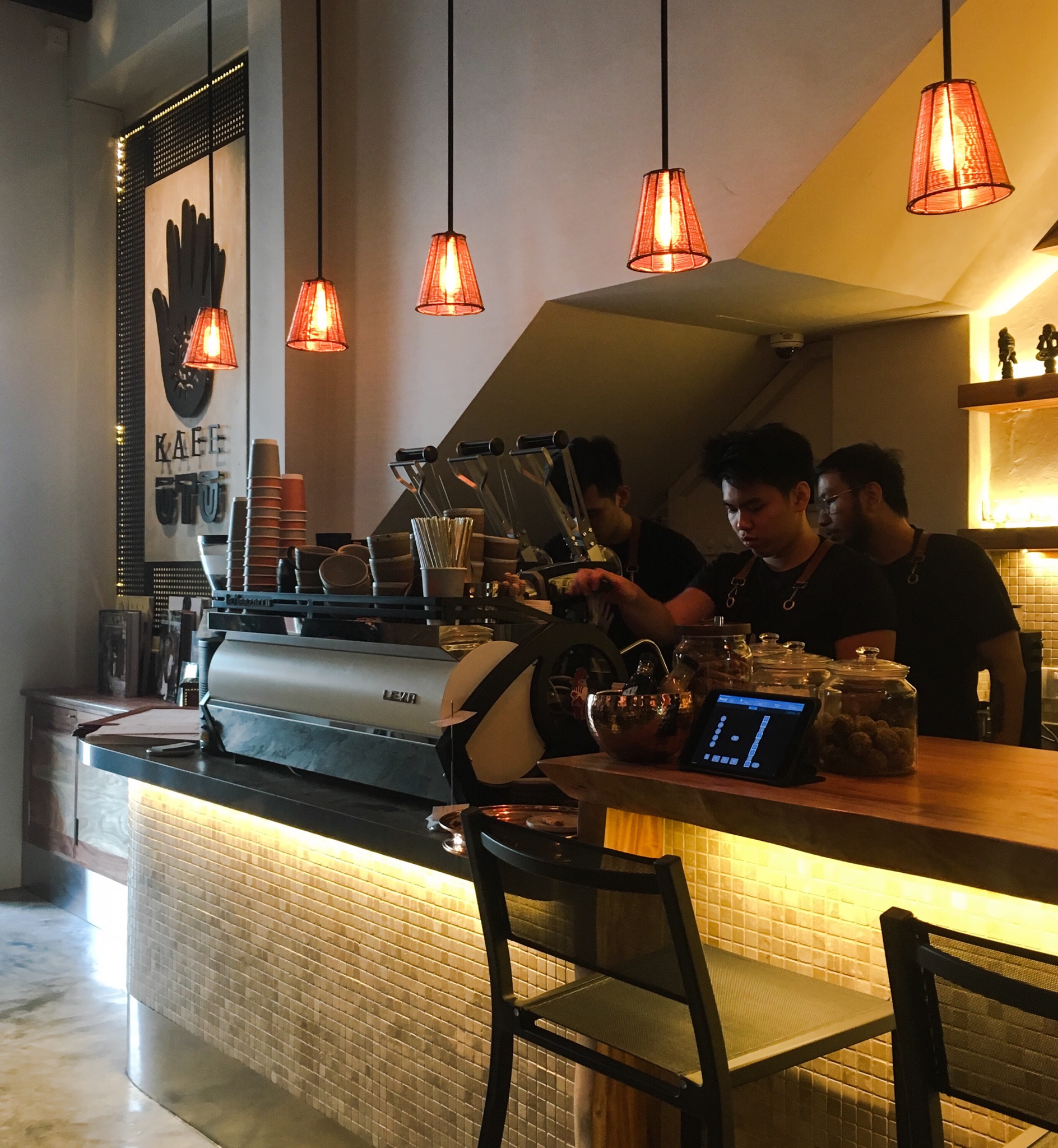 Kafe UTU is exactly what the Singapore cafe scene is lacking; while third-wave coffee movement spots are aplenty all across the island, many of them are pretty much the same-o, featuring either comforting brunch fare or what is being dubbed as contemporary progressive cafe grub. The scene, at this stage, seems to lack diversity, with cafes serving up tested-and-proven favourites that echo one another. This is where Kafe UTU does it differently; being Afro-themed, it provides yet another perspective to the cafe scene. No doubt some of the items may seem a tad adventurous, but Kafe UTU does a great job in providing a good balance between the two, satiating those who do not mind trying something new, while having choices for those who prefer to opt for more familiar-sounding combinations. The quality of the food was also on point; one could indeed taste the quality of the ingredients, and the passion and hard work in the pursuit to refine the recipes to its best. Not only was the food comforting, but they were also well-executed with finesse. Service was also of a respectable standard, with the staff engaging the patrons in small talk and also patiently explaining the different items off the menu. There are not many cafes with a strong character these days, but Kafe UTU is definitely not one of those; its strong emphasis in its Afro-themed menu and decor separates them from the countless cafes around in Singapore, and it is certainly a destination to check out for the vibes, the food, and the special concoctions of specialty coffee they serve. We wish the folks behind Kafe UTU all the best in what is to come, and we would be looking forward to our next visit back here again to give the other items a try!