Bearded Bella is the latest cafe that had moved into Craig Road, following the opening of both Pastaria Abate and Hustle Co. sometime back last year. 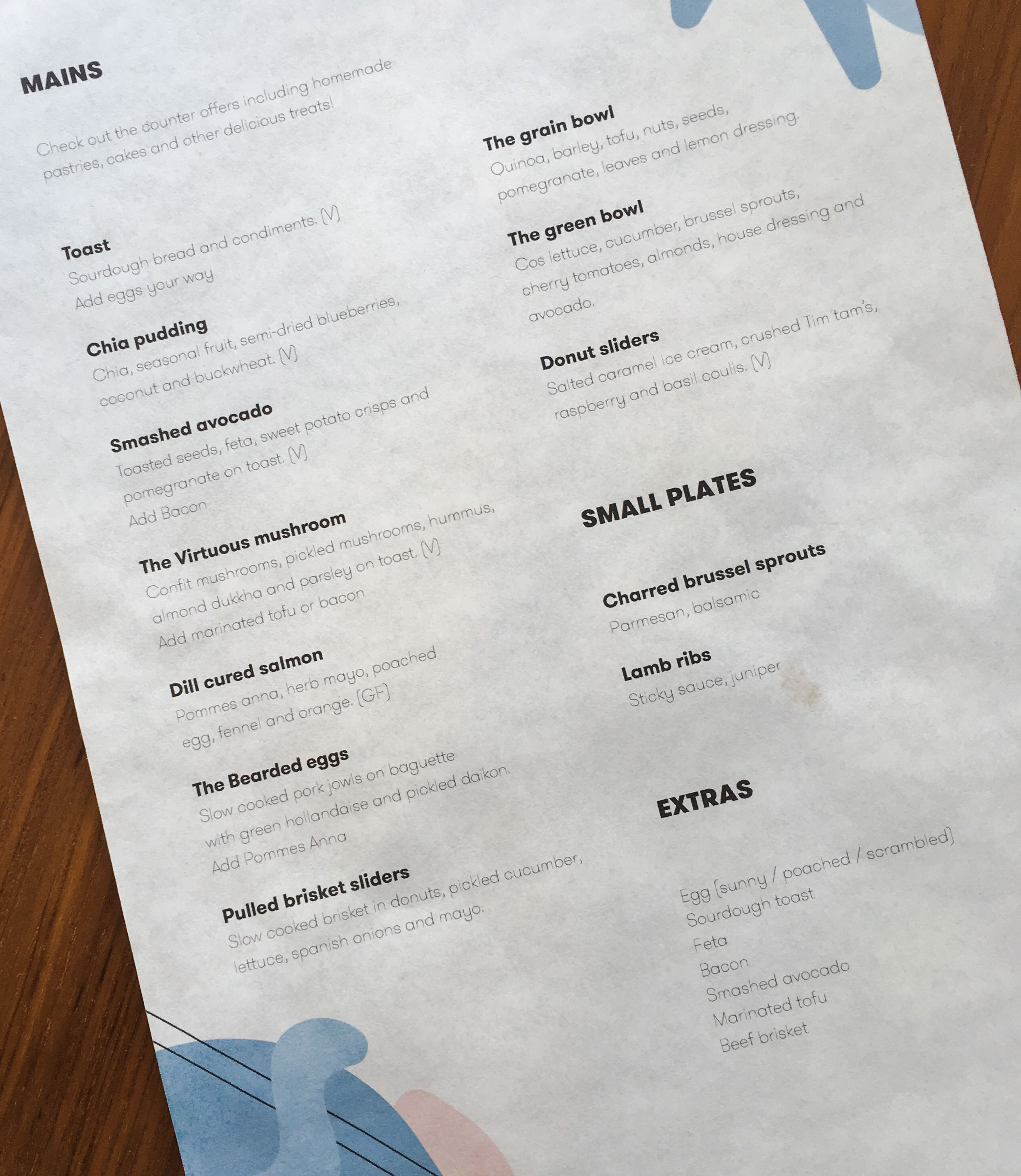 Opened to much hype, Bearded Bella had started its pre soft-launch phase during the Chinese New Year season; possibly also one of the recent openings that gained much attention of the late within the cafe scene considering how most cafes would have chosen to stay closed during the festive season. Despite being situated at Craig Road, Bearded Bella’s location is set slightly away from the usual stretch of shophouses that used to house cafes such as now-defunct The Plain and Selfish Gene Cafe; Bearded Bella is located slightly nearer to Tanjong Pagar, occupying the last shophouse unit before the turn into Duxton Road. Stepping into the cafe, Bearded Bella carries a clean and minimalist look with a slight hint of an industrial element, adopting a largely white colour scheme with wood and brass accents that is bright with geometric designs and nature incorporated into its interior decor. For its pre soft-launch menu, Bearded Bella was serving up a few small plates along with a good variety of main dishes; mainly brunch items alongside desserts such as cakes and which are kept in the display fridge at the counter. Beverages served during their pre soft-launch phase includes coffee and juices. It was also noted that payment is by tips-only basis during the pre soft-launch phase, where patrons are able to make payment of any amount for their meal. 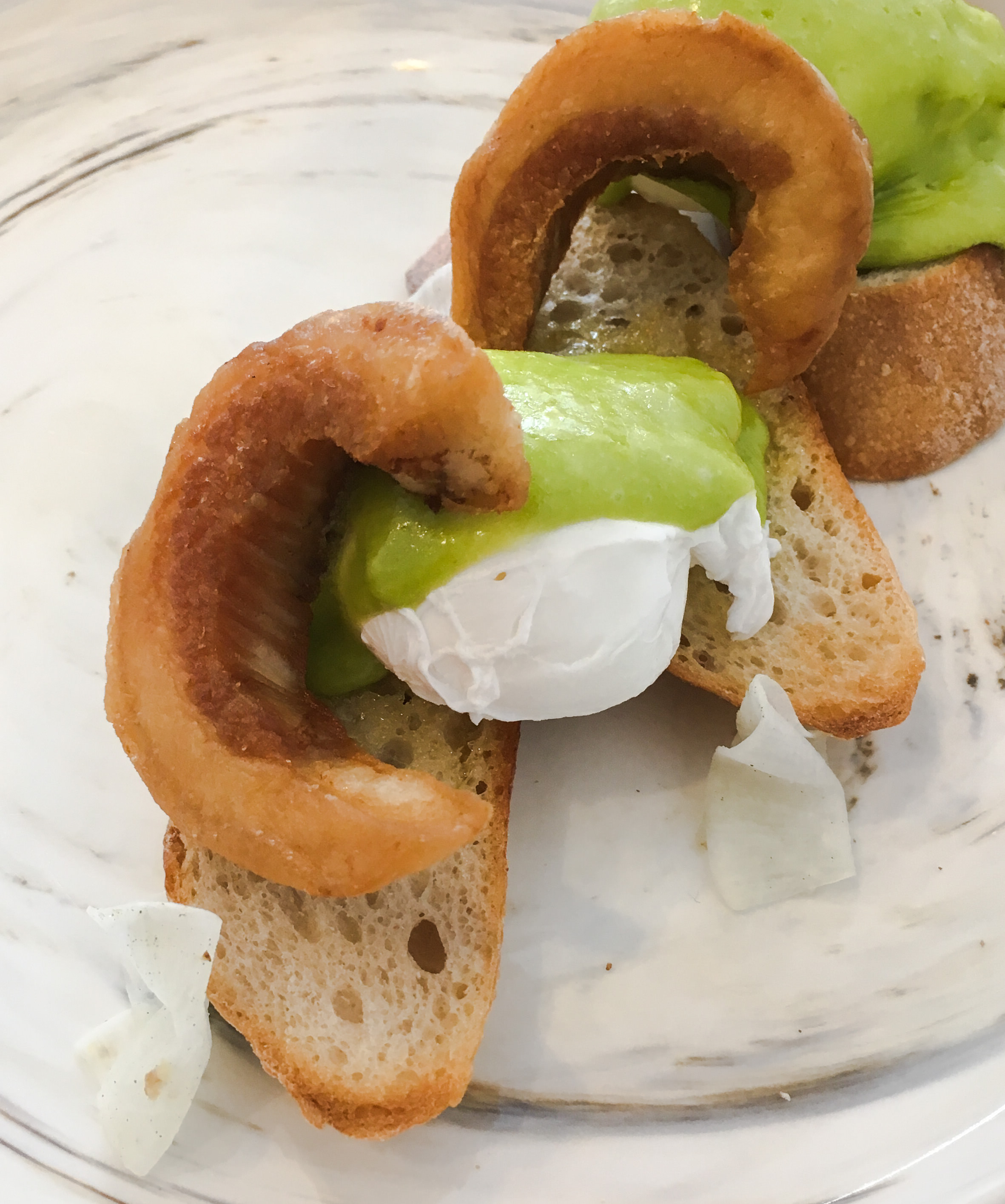 Going for one of the brunch plates, The Bearded Eggs is described as “slow cooked pork jowls on baguette with green hollandaise and pickled daikon”. The item also comes with an option to add on Pommes Anna; an option that we did not go for considering our other brunch item comes with the Pommes Anna as default. By aesthetics, the item did not quite gel well with us; for the most part, the green hollandaise did provide quite a stark colour contrast that seems to visually stand out from the other elements on the plate which was not something we were quite comfortable with. That aside, the slow cooked pork jowl were immensely fatty; crisp on the outside while melt-in-the-mouth tender within. The pork jowl did not carry a porky stench, though felt a tad bland and could perhaps do with a little bit more salt to bring out its flavours slightly more. Baguettes were buttered; crisp on the crust with a bit of tension with every bite, while the pickled daikon felt a tad bland and still crunchy, missing the tang that was suggested. The poached egg yolks were well-executed; the yolks being all flowy with a poke from the fork. Interestingly, the green hollandaise came with a lime-ish zing amidst the creaminess; a flavour that did not sit well with our taste buds for its oddly sour notes just did not gel well with the hollandaise itself. While it does seem to be an inventive approach to incorporate a tart flavour into the hollandaise to provide a flavour that could cut through the meatiness of the pork jowl, we thought the lack of savoury flavour from the meat was the missing link between the green hollandaise and the pork jowl, causing the green hollandaise to seemingly play its own tune to the dish overall. 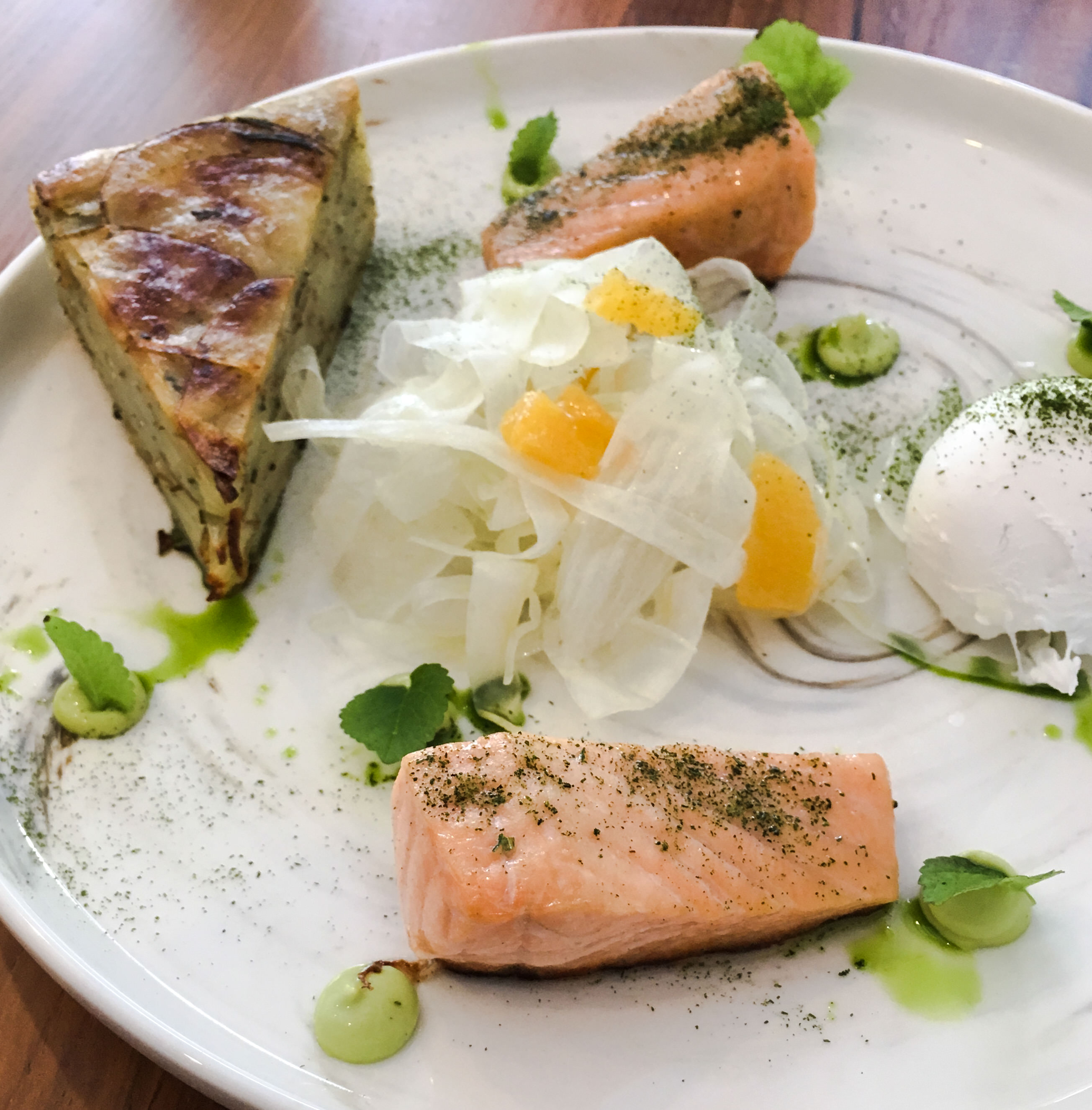 Between the two, the Dill Cured Salmon is the dish that set the impression right. Described as “Pommes Anna, Herb Mayo, Poached Egg, Fennel and Orange”, the Dill Cured Salmon would be our choice for a dish to try here amongst the two main courses that we had ordered. The salmon starts off the dish well; flaky and fresh, carrying its own flavour whilst perfumed with a hint of aroma from the dill, it went well with the equally savoury Pommes Anna. Thinly-sliced potatoes stacked atop one another, it comes seasoned with pepper and salt; almost identical to a well-executed gratin with an interesting texture considering how the potatoes were tightly packed above one another. Other elements proved to be the secondary characters to the Pommes Anna and Dill Cured Salmon on the plate; the fennel and orange being rather bland and lacked pretty much any flavour apart from the citrus zest that gave a refreshing tang, while the poached egg, whilst being a nice touch, seemed to lack a purpose of existence in the entire plate, oddly placed in a corner on its own without any complimenting element to go along with. Despite the misses, we actually enjoyed the dish pretty much considering the flavours and textures of the Pommes Anna and Dill Cured Salmon; a dish that we found to fare better than The Bearded Eggs overall. 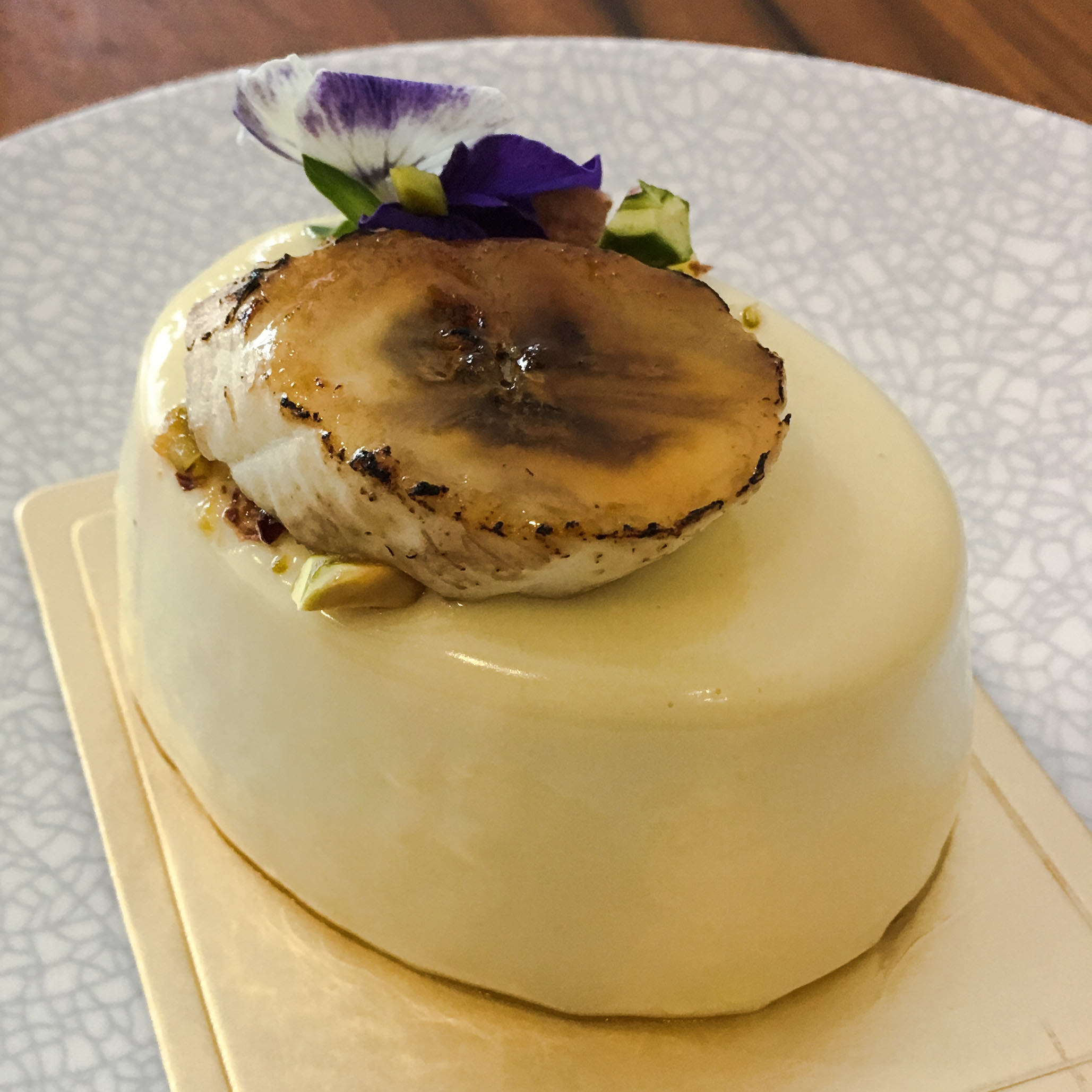 As compared to their mains, the dainty and delicate cakes at Bearded Bella seems to be their stronger suit here as compared to the mains. The Passionfruit Banana was a cake that we ordered by chance after contemplating between another cake for a long while. Unlike other similar cakes from local patisseries, we were impressed with how the glazing of the cakes here comes void of any of the gelatinous glazing that gives similar cakes an undesirable, jelly-like texture on the exterior; this meant that the mousse cakes here come pretty smooth on the exterior. Carrying the flavours of caramelised bananas in the mousse layer, we liked how the sweetness goes around the tastebuds subtly with every forkful, while the passionfruit gelee helps to add that slight hint of tart sweetness for a bit of dimension for some contrast. The mousse layers are also adequately dense; not too airy and came with a consistent texture for a good mouthfeel. 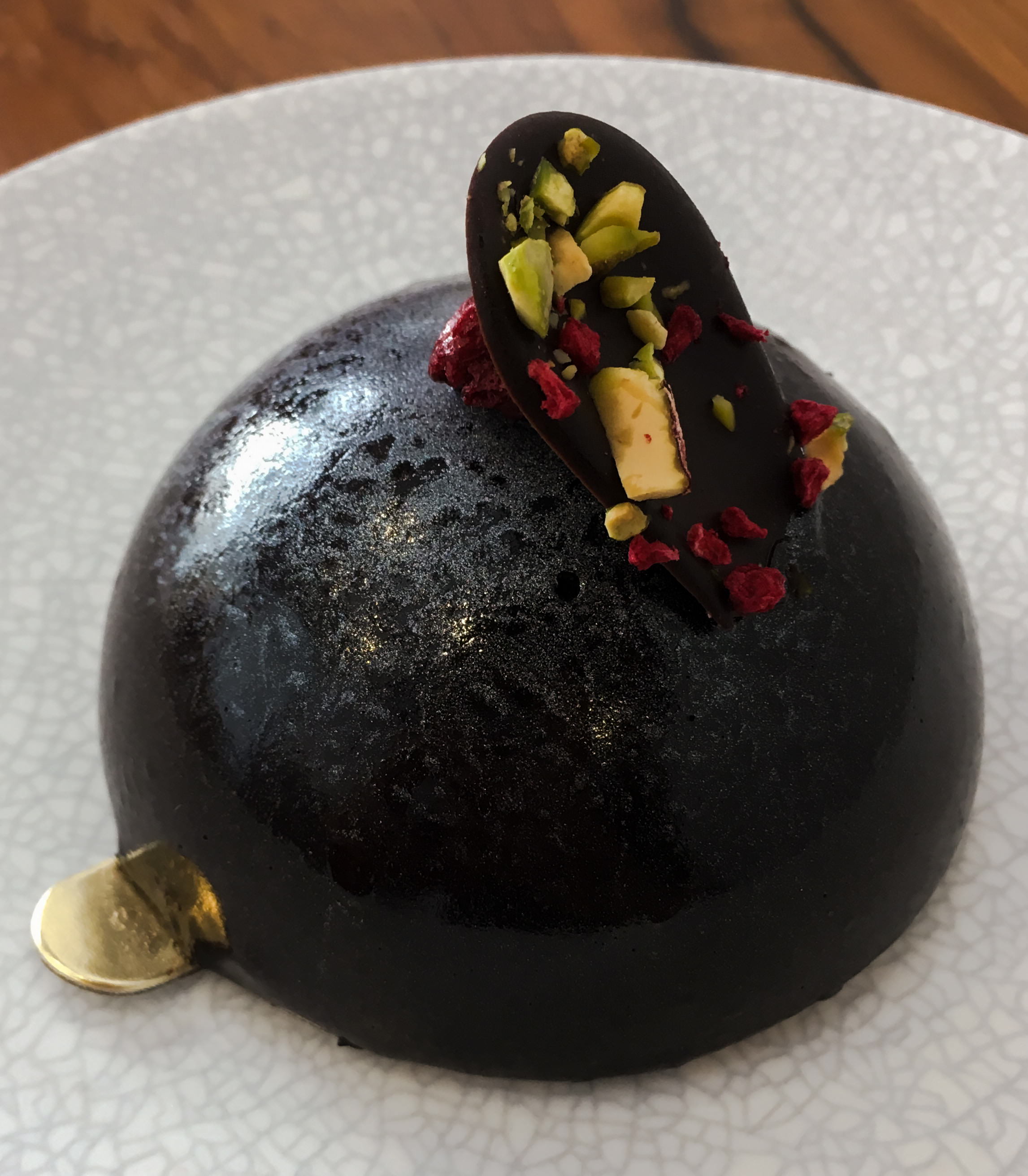 The Dark Chocolate cake was also a well-executed cake that fared well in terms of flavour and texture. The mousse itself was consistent in texture throughout; smooth, rich and elegant with its rich bittersweet notes that did not heat up the throat. Hidden within the mousse is a layer of raspberry gelee in the middle that sits atop a brownie layer; the raspberry gelee providing the flavour contrast by adding a dimension of tartness that helps to cut through the chocolate, while the brownie helps to provide some chew, though admittedly could have been fudgier for better texture. 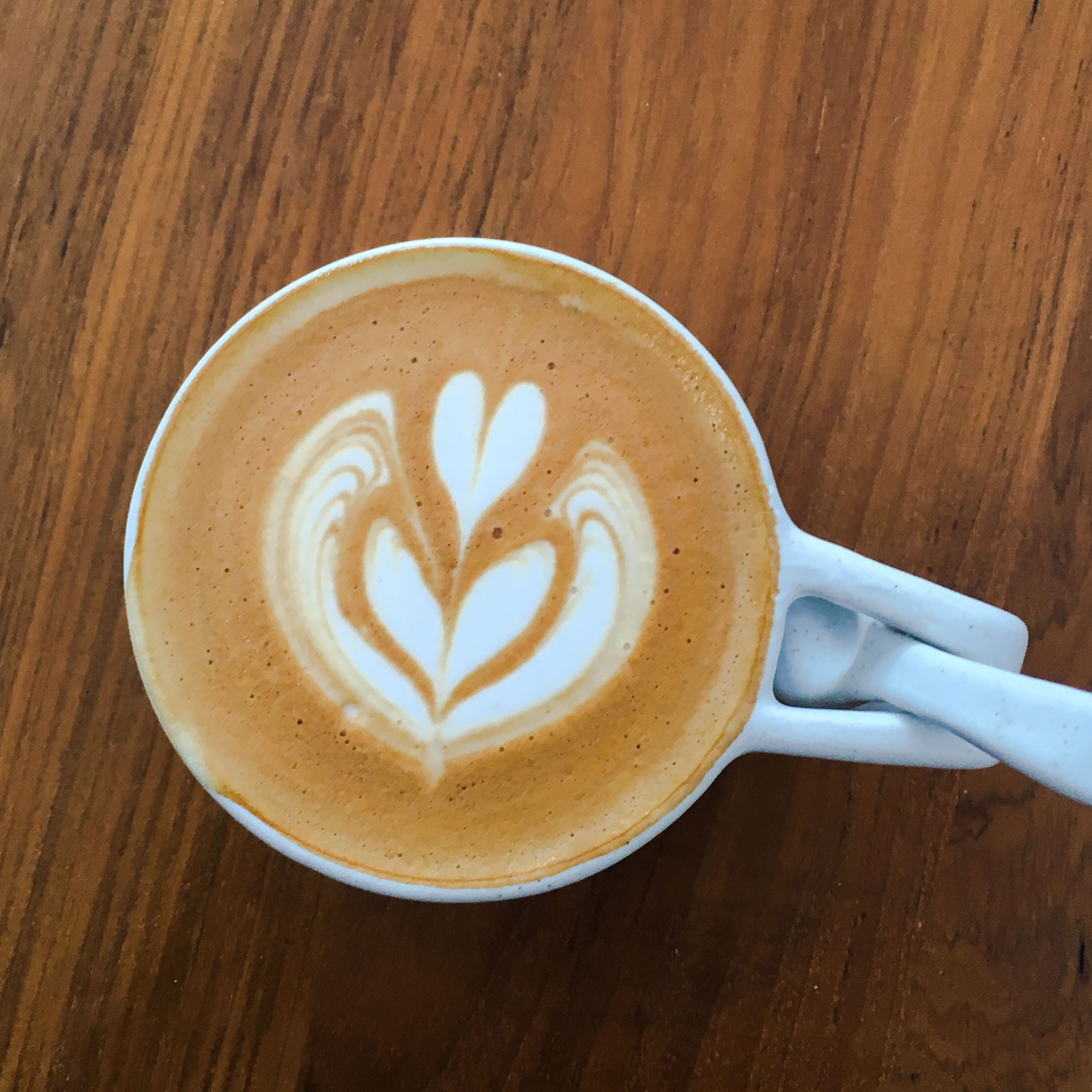 Bearded Bella is one of the few places which roasts their own house-blend when it comes to their coffee; the blend consists of 70% Ethiopian and 30% Honduras beans. Unfortunately, our White (5 Oz) which we requested to come with a double shot of espresso turned out to be especially acidic. Not sure if this is a one-off situation considering the rave reviews we have seen on social media about their coffee, but it was one of the rare cuppas that we actually left more than half the cup untouched. 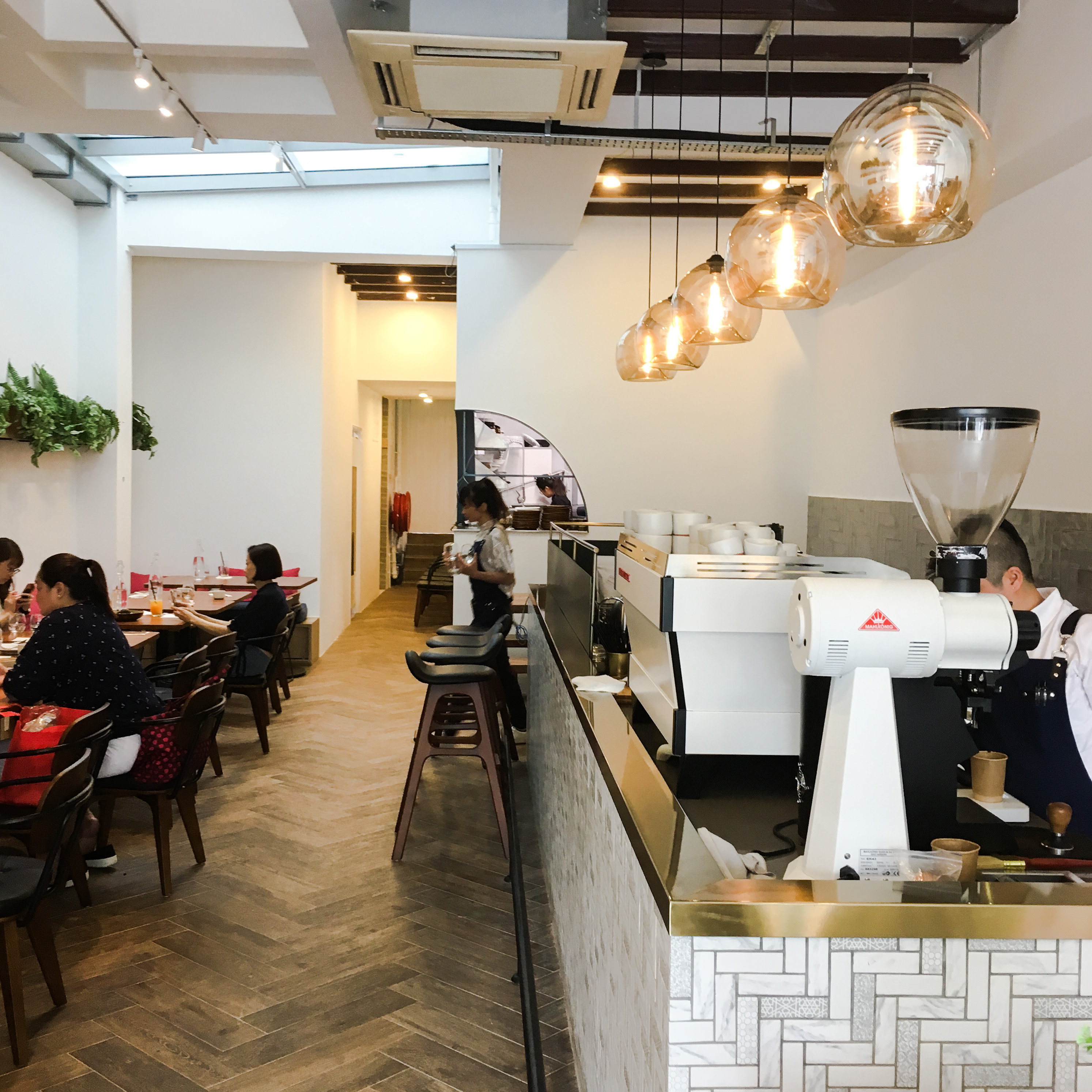 Despite the rave reviews that we had seen online about Bearded Bella, our experience was actually filled with many hits and misses. One possibility could have been that the day of our visit was one of their off-days; service was slow with food taking quite a while to arrive (the staff did apologize for the wait, though we noticed a table that ordered later receiving their food earlier than ours), while the cafe seemed to be seemingly short-handed on the day of our visit (understandably so, considering we visited on the third day of Chinese New Year). The place does seem to have its own character, but the food seemingly just does not quite hit the mark; especially so with The Bearded Eggs which just felt a little plain and odd at the same time. The slip-up with the coffee was also rather surprising considering how places that roast their own coffee are able to serve better coffee given that they should be familiar with their house-blend. Sure, the folks at Bearded Bella seem to have the passion for what they do, serving up inventive brunch plates; the efforts are commendable considering how they try to go through the process for their food and coffee, but the results are not optimum to speak the least. Perhaps Bearded Bella would have to take a look in their operations during this pre “soft-launch” phase and gather feedback, as well as to refine their processes before their soft/official launch to sort out the inconsistencies that they might have; there is simply so much potential with Bearded Bella that it would be a pity to see it being anything lesser than what it can be.