The jiaksimipng Foodnotes series is essentially a monthly review of selected places that we have dined at which are worth a mention but skipped on the blog for various reasons (e.g. personal commitments, lack of coverage for a full-length post etc.). Do check out the January, February and March edition of the jiaksimipng Foodnotes if you have missed them. For the month of April, we have also posted full-length articles for The Masses, Tsukiji Fish Market Restaurant, Brine Restaurant, Seoi Gor Cafe, Steamroom with The Pillar and Stones, ERGON, Nesuto, 5 Senses Bistro, mo-ii and Gonpachi Ramen.

(Do note that we only include places that we have made anonymous visits to and paid for our meals in the jiaksimipng Foodnotes series.) 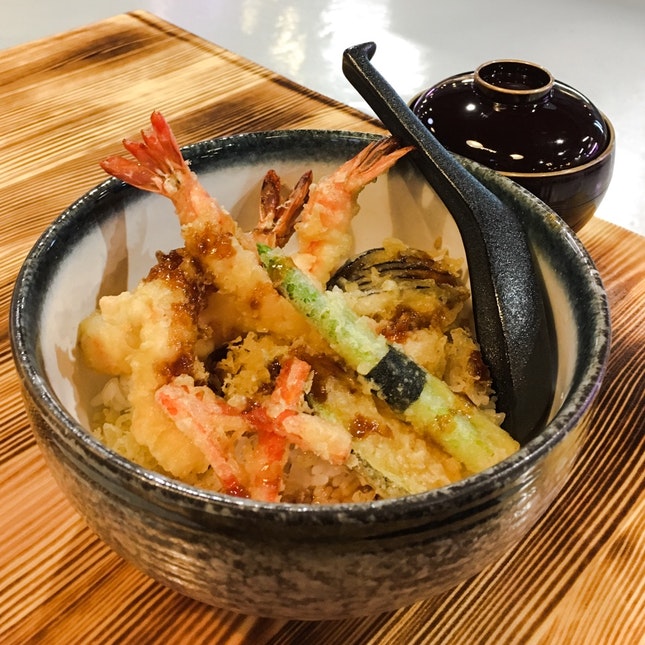 A rather weirdly located Japanese eatery at the side of a grocer, Sens Singapore is found within Taste Holland Village at the basement of Raffles Holland V. They serve quite a large variety of Japanese cuisine on the menu, such as sashimi, sushi, nabemono, noodles, donburi and even charcoal grilled items; it is actually pretty extensive. We gave the Tendon a try, which was surprisingly light and crisp and not too greasy; one that was a little more controlled in portion size and was pretty manageable to have without feeling overwhelming. We also tried two of their sushi; the Sake Sushi and the Sake Aburi Mentai; both pieces came with a reasonably thick slice of salmon with vinegared rice that was not overly firm and lightly sweet; we preferred the Sake Aburi Mentai given how we love all things aburi-ed here, but just imagine that melty slice of salmon with umami mentaiko over the top. Prices can run from a pretty wide range here depending on the items ordered, but there seems to be quite a variety even if you are into keeping the damage from the meal as low as possible.

(Read our review of the Ten Don and Sake Salmon & Sake Aburi Mentai via Burpple.) 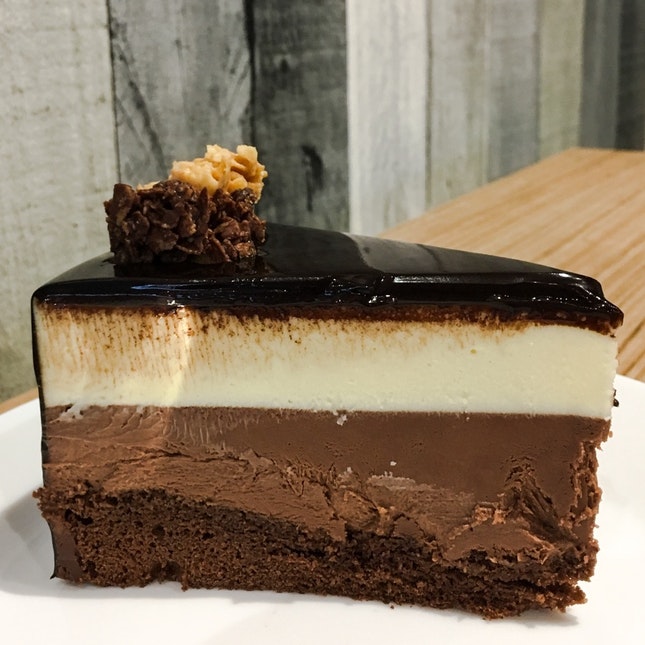 Opened at a pretty visible corner if not for the tinted glass facade of *scape, The Batter Affair is a humble nook that serves primarily sliced cakes and tarts alongside coffee, tea and other beverages. They serve a pretty mean chocolate entremet which they name Triple Choc Coma; a mousse cake with layers of milk chocolate and dark chocolate over a chocolate sponge glazed in chocolate ganache. Despite how the combination might have sounded rather overpowering, the flavours were adequately sweet without leaving a nasty aftertaste, while the layers were of the same consistent smoothness and the entire cake being pretty rich; very suitable for chocolate lovers. They also do serve quite a variety of cakes and tarts for the non-chocolate dessert lover, and the affordable prices does make it a good place for catch-ups over coffee and tea especially being in the Orchard area.

(Read our review of the Triple Choc Coma via Burpple.) 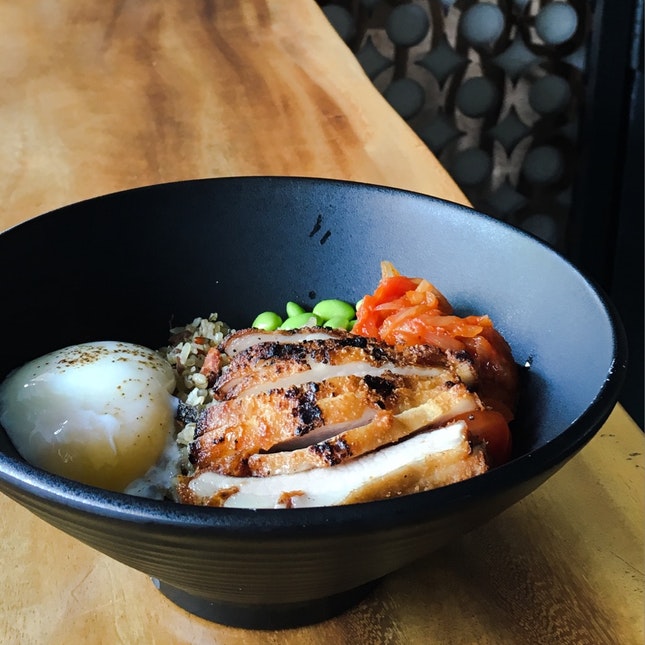 Garang Grill is a collaboration between New Ubin Seafood and Slake. Located at where Slake used to be at Swan Lake Avenue, Garang Grill opened to much hype the month before dishing up spectacular grilled meats, seafood amongst other dishes as well as their signature Garang Rice. A month into their operation, Garang Grill has released a lunch-time only menu of Lunch Rice Bowls; there are only three different ones being offered such as the Roast Beef “Chuck Norris”, Crispy Pork Jowl and the Lime Leaf Chicken. All the rice bowls come with olive rice, sous vide egg, spicy tomato chutney and edamame. Our order of the Crispy Pork Jowl Bowl was on point; tender pork that is cut along the grain and succulent with a good fat to lean meat ratio came with a crisp and smoky charred exterior that was absolutely divine, while the olive fried rice comes with a whiff of wok hei is lightly fragrant and becomes silky once the sous-vide egg with a flowy yolk comes mixed in. The spicy tomato chutney comes with a light tinge of sweetness, yet a little tangy and spicy just to cut through the meatiness. The Durian Creme Brulee also carried the pungent flavours of durian well with a crackling layer of torched sugar over the top. Overall, the bowl never felt overwhelming; finishing it was an easy task especially given how well-portioned everything was and how well-executed all the entire elements are. Needless to say, the Crispy Pork Jowl Bowl is something we would not mind making the trek down to this neighbourhood in Siglap for again! 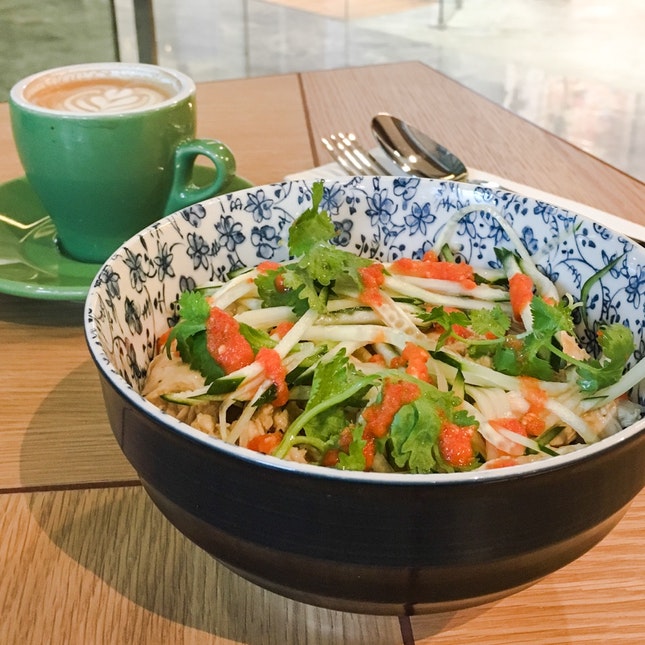 Paragon seems to be refreshing its list of tenants; we have had Bakers Brew Studio in last month’s jiaksimipng foodnotes series and this month, its 63Celsius/63Espresso’s latest outpost at Paragon. We made our visit during the soft launch phase, where the menu served during lunch had categories such as “Beef”, “Comfort” (e.g. burger, hotdog bun and pork chop), “Artisanal Pasta”, “Greens”, “Sides”, “Seafood” and “Desserts”. We went for the 63 Chicken Rice; their twist to the local favourite chicken rice as a rice bowl that seems to be the trend recently. While it was a pretty interesting dish overall especially with the thoughtfulness behind how each element was served in a format that allowed every component to be had in a spoonful, the rice felt as though it lacked the flavour one would expect from chicken rice. Flat White was good, pulled from single-origin beans from Brazil that carries a medium body and a nutty, chocolatey flavour profile. Prices here are on the high side; probably a place to hit if one is willing to splurge a little for a meal.

(Read our review of the 63 Chicken Rice and Flat White via Burpple.) 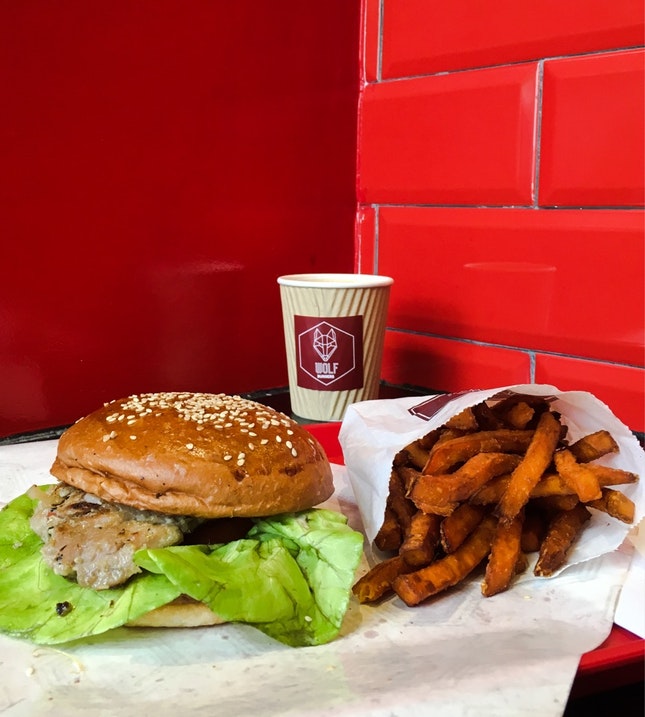 Wolf Burgers opens their second branch after their successful first at Pasarbella Suntec City. While the menu (which features some new items) is the same as the one offered at Suntec City and carries no exclusive items, Wolf Burgers’ first standalone outlet does bring a lot of excitement to the office workers of the east given the choices of dining establishments in the area. The space is actually decently-sized with quite a good amount of seating available, though still a little short of the demand as observed on the first day of operation. We went for the new Lemongrass Chicken Burger which unfortunately was a little lacklustre; the greens were actually somewhat manageable despite looking pretty leafy and huge in proportion to the buns and that we liked how the grilled chicken patty was marinated with lemongrass for a pretty good flavour, but the lack of kick from the Sriracha Mayo was a little disappointing. The sweet potato fries were also limp and sad, soaked with oil; a far cry from how it used to be at their Suntec City branch. That being said, the coffee (which is brewed by a blend of beans of 50% Ethiopian and 50% Brazilian origin) was actually pretty good. Their other burgers which have been around for longer may seem to fare better; still its a good addition to the Changi Business Park, an area that seems largely forgotten in the F&B industry. 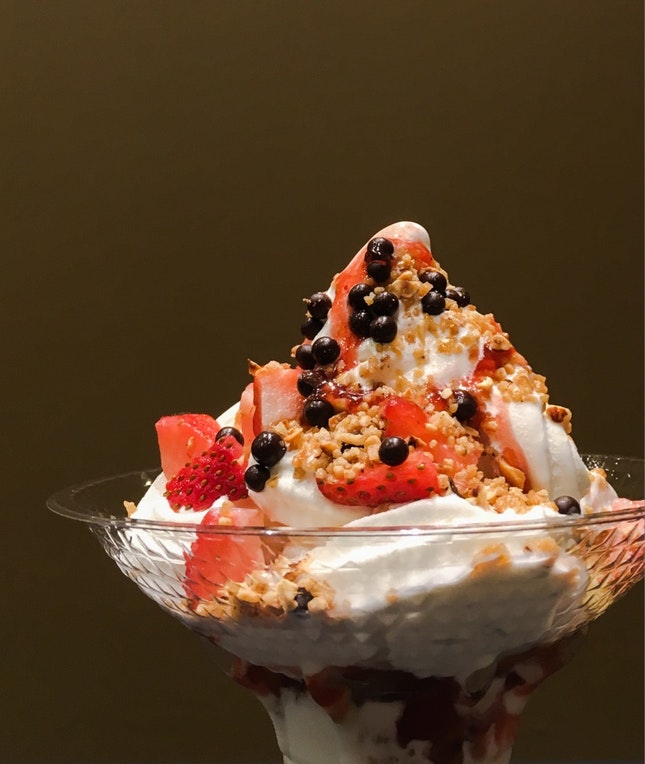 There are plenty of Rive Gauche Patisserie outlets around the island, but the recently-opened branch at CityLink Mall is the first to boast a dine-in area that allows patrons to enjoy their cakes/desserts in the shop itself. Also pretty new to Rive Gauche Patisserie would be the introduction of the Yotsuba Milk Soft-Serve which is served in sundae form or even as affogato. We gave the Strawberry Milk Soft-Serve a try; while the strawberry sauce was rather pedestrian and felt similar to those served in fast food chains, the soft-serve was pretty milky and smooth and comes with other toppings such as nuts, cornflakes and strawberry chunks to provide for some crunch to provide for a variety of textures. Sure, the bowl used is a little bit of a hassle with its rather narrow base which is not quite practical for dine-in ( it fits the hand very well for takeaways), but the portion is pretty generous given how it could feed two. A decent cool, sweet treat while shopping around in town!

(Read our review of the Strawberries Milk Soft Serve via Burpple.) 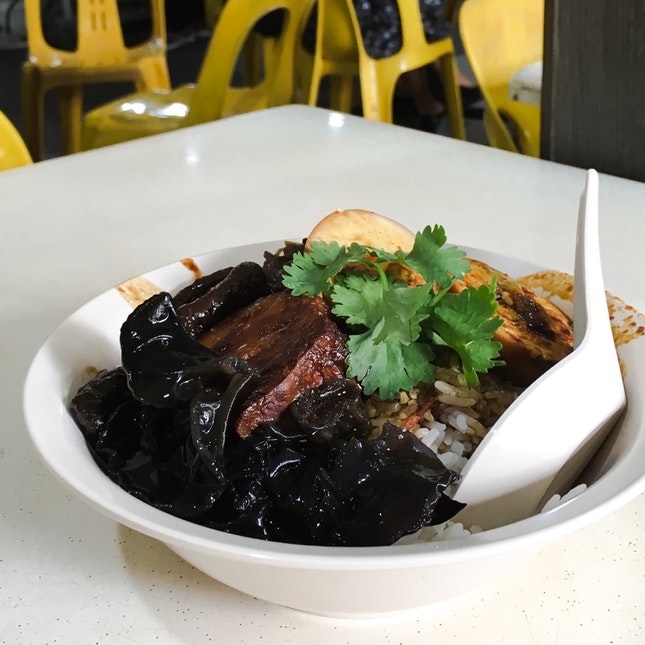 After a relatively brief stint at Bedok, Mr Lorbak is finally back (and with their own signage!) at UBI350 coffee shop. Serving just a single dish, the stall seemed rather popular despite being in operations for just a few days when we made our visit. Each bowl comes at a standard price of $3.50, while the addition of dried pickled Chinese mustard comes at $0.50 extra; every bowl comes with two halves of braised egg, black fungus and a rather large slab of Braised Pork Belly. While the portion may look small, it is surprisingly filling to the right degree; one would definitely not leave feeling hungry after having a single bowl of their Braised Pork Rice. The meat itself comes with a good ratio of fat to lean meat; the top being gelatinous while the bottom gives it that bite; the marination is done pretty light that it enables the meatiness to cut through without being too porky. We would recommend opting for the dried pickled Chinese mustard even though it is optional; it provides a crunch with a mellow tanginess that provides yet another dimension of flavour that contrasts with the other elements within the bowl. Do note that the stall churns out small batches of meat each time so there is definitely waiting time involved in between; we were lucky we had our order within 10 minutes but we have no idea how long it could take at maximum.

(Read our review of the Braised Pork Rice via Burpple.) 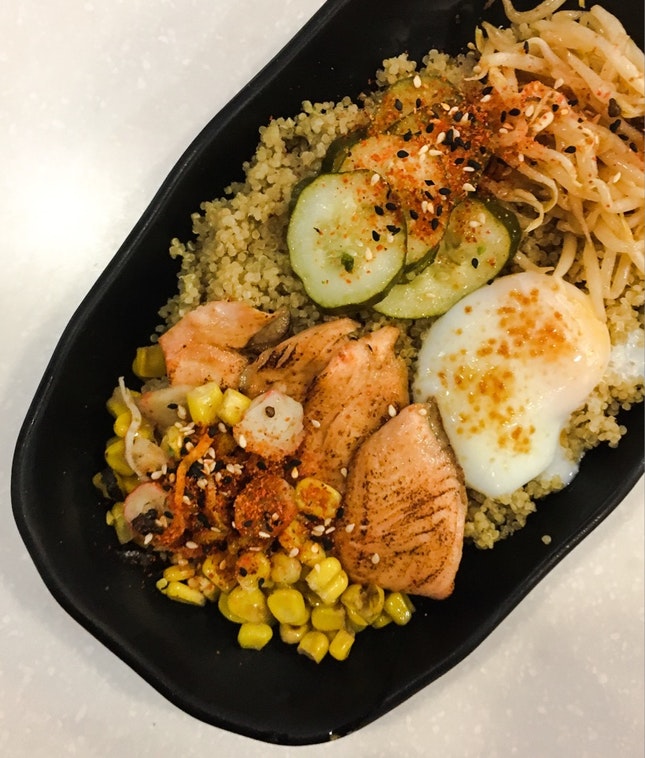 Relatively new at Food Inn at Esplanade Xchange, Modus serves up healthy Quinoa bowls to the office folks around the area with a number of pre-defined combinations of condiments such as The Thai Bowl (Thai Basil Pork Shoulder), The Western Bowl (Australian Striploin with Fermented Pineapple Salsa) and three other variants. We gave The Japanese Bowl a try, which consisted of Aburi Salmon with Tsukemono, Corn Kernels and Furikake; we had also opted to add a poached egg for an extra $0.50. While the poached egg was just a little short on ooziness we would have expected, it was a decent option for those who are health-conscious; the salmon slices comes with a hint of smokiness while the entire bowl seemed to be flavoured by the Furikake, with the corn nibs adding a little tinge of sweetness with every spoonful. The Tsukemono (pickled Japanese vegetables) provides the intense, contrasting sourness to the rest of the bowl, creating yet another dimension of flavours though could be a little too sour for some.

(Read our review of The Japanese Bowl via Burpple.)